United start New Year on a winning note over JackJumpers 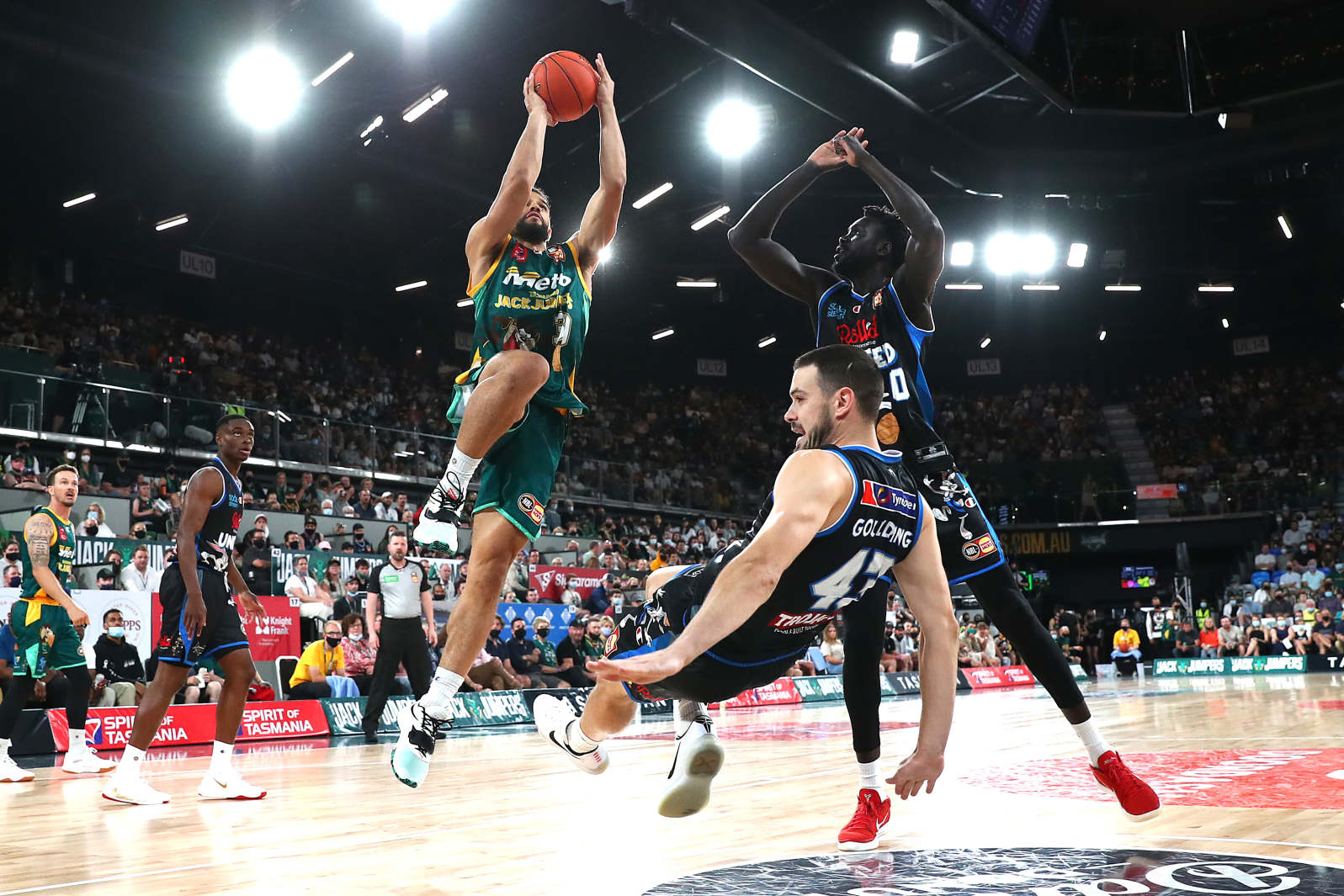 IN an entertaining match to start the 2022 year, the Tasmania JackJumpers and defending champions, Melbourne United faced off against each other for the first time. Both sides were coming off respective wins on Boxing Day heading into the clash, and were hoping to continue that form in this contest. Both teams were without players due to COVID protocols, with Dion Prewster and Callum Dalton out for United, whilst the Jack Jumpers missed Will Magnay. In the end, the home side took it right up to the defending champions, but fell four points short, 76-72.

Both teams got off to a fast start and added some quick points through United’s Caleb Agada and JackJumpers’ Sam McDaniel. With Agada pushing the tempo for United, he scored another two points, 4-2, with 8:58 in the first. Matthew Dellavedova and Jo Lual Acuil also got involved in the game, with the latter hitting an open three-point shot outside the arc, 7-2.

With Josh Adams hitting a jump shot, from an assist by Jarred Bairstow, Dellavedova and Lual Acuil teamed up once again with Lual-Acuil finishing the play with a dunk. From there, both teams pushed the floor and ran. Josh Magette got himself into the game, looking to get the home side into it and add some scoreboard pressure, drawing the foul on Dellavedova and hitting two free throws, 14-8 with 6:23 left in the first. Another shining light was Sam McDaniel, who was aggressive going to the free throw line and Magette hitting a three, from an off screen by Fabijan Krslovic.

Despite some tough shots offensively for both teams, they were looking to settle in their sets and run some plays. To the JackJumpers’ credit, they were able to put on defensive pressure getting the ball back down to their end.

Ariel Hukporti was a key highlight, being aggressive in the post and hitting two free throws, 18-14 with 3:26 left in the quarter. Melbourne looked to be more aggressive, and following a pass from Jack White, Shea Ili drove hard and earned a trip to the line, nailing one of two free throws.

The JackJumpers were able to create some highlights of their own, with Jarrad Weeks coming into the game, bounce passing and finding Krslovic finishing it off with a dunk. Clint Steindl nailed two of three from the free throw line and Adams crossed over and finished the play over Hukporti, with the JackJumpers taking the lead, 20-19.

Coming into the second quarter, United were desperate to put the defensive pressure on the home side, looking for shorter passes, ball movement and being patient on the offensive end. With United turning the ball over, Adams and started the scoring in the second quarter.

Whilst Agada hitting a tough three pointer over Kenyon, from an assist off Mason Peatling, MiKyle McIntosh answered with three points of his own, driving hard and going to the free throw line to give the home side a seven-point lead early, 32-25.

The defending champions had to call a timeout with 7:46 left in the second quarter, off a three pointer from Clint Steindl. The JackJumpers had all the momentum, as United addressed the need to be more aggressive and put the defensive pressure on the home side.

Lual Acuil continued his strong presence in the second quarter with a dunk off an assist from a pass by David Barlow. With the tempo once against fast paced and both teams struggling to hit their shots on the offensive end, another timeout was called by the home side to find that momentum early in the quarter.

From there, the momentum shifted to Melbourne United, adding the pressure defensively and key players stepping up, especially off the bench, with Hukporti standing strong in the post and nailing shots. With Steindl hitting a three, players such as Brad Newley and White sparked United, with Newley scoring over Jarrad Weeks, Newley finding Hukporti finishing off with the dunk, and White being dominant defensively. Hukporti scored off a Dellavedova assist, going to the free throw line and levelling the scores.

While the Jack Jumpers looked to take confidence and finish the half strong, United were keen to keep the momentum in their favour. Goulding set up a great one-two with Lual Acuil, finishing the play and levelling the scores. Jack McVeigh hit back with a three, looking to find confidence in the game and have an impact.

Melbourne United had a strong finish to the second quarter, and off a 22-16 term, the defending champions took a one-point lead going into the half-time break, 44-43.

Looking at the half-time stats, for the home side, Adams was instrumental in the first half with 13 points, as was Steindl (eight). For Melbourne United, Lual-Acuil scored 13 points and five rebounds along with Ariel Hukporti (nine points, four rebounds).

The JackJumpers needed to address their field goal percentage shooting 16/39 at 41 per cent, whilst for United, they shot 18/28 at 64.3 per cent.

With the physicality going up another level, both teams were looking to settle into the match. Chris Goulding was able to get the scoring underway in the third quarter with a three, and then Adams answered back being creative. The JackJumpers had a great play with McVeigh pushing the tempo and Magette nailing a three to give the home side back the lead, 48-47.

To United’s credit, once again, key players were able to stand up. Ili set it up for White, forcing the home side to call a timeout. United’s bench players played their part and lifted the energy, with Goulding on song again hitting another three. The JackJumpers were unable to hit their shots, they were able to take better shots and gets stops defensively.

Then came an injury scare to Weeks was a concern for the home side and hopeful there was nothing serious.

The teams traded blows with a McVeigh triple giving the Jack Jumpers a small buffer, but Dellavedova answered back with a great two-point floater. Lual-Acuil finished the quarter blocking Magette’s shot on the three-quarter time buzzer, and this game was sure going to go down to the wire. The JackJumpers went into the three quarter break up by two points, 65-63.

The Jack Jumpers key message was to finish the game strongly. The defensive pressure increased for the home side, winning the third quarter and keeping United under 20 points, winning it, 22-19.

United was determined to get stops defensively, keep the ball moving offensively and continue to add the pressure from half court.

The home side gave Lual Acuil problems early in the third by double teaming him. Whilst both team’s tempos were up and down, Agada nailed a floater to level the scores and Newley, using his leadership, stepped up and set the energy standard for United.

Once again, the JackJumpers kept fighting and did not make it easy for United to hit scores offensively. After a brutal few possessions, coming out of the timeout, Ili stepped up hitting a tough shot, with the lead 67-66 and as a collective, nailed their execution offensively.

Ili hit another forcing the home side to call a timeout with 6:43 left, up 69-66 in the game and looking to re-group, sensing the game is slipping away after having the momentum earlier in the second quarter and looking to replicate that in the last.

United now had the momentum, whilst Adams hit a shot as the shot clock went off. White had a highlight of his own blocking McIntosh’s shot, and Agada hit a three. White scored two points and putting the defensive pressure on, forcing another timeout.

Whilst the Jack Jumpers were gallant had their opportunities to add the score board pressure and had chances to take the lead and turnovers hurting costly, it was United’s experience towards the end of the match that got them over the line.

When Ili found Lual Acuil with 10 seconds left and scored, it was the icing on the cake. Whilst Magette nailed two free throws, it was not enough as the defending champions took a four-point win, 76-72.

The Jack Jumpers play a double header next week, playing at home on Saturday, January 8 against the Sydney Kings, before going on the road to Melbourne to play the South East Melbourne Phoenix at the State Basketball Centre. For United, they will have a single game playing against the Illawarra Hawks on Sunday, January 9.