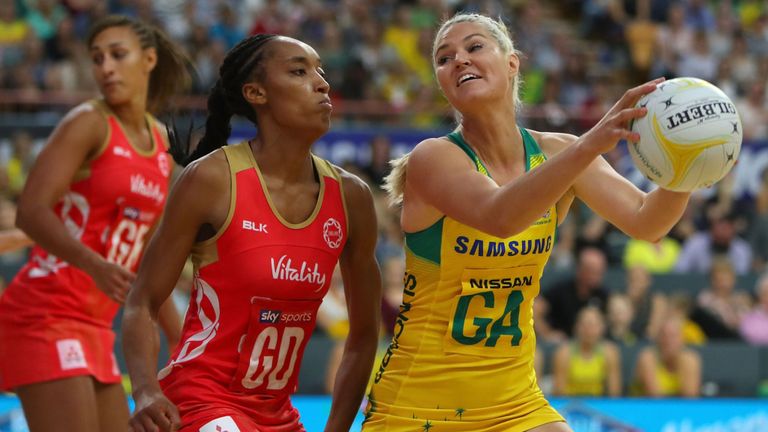 IT was the finale to what had been an unforgettable Quad Series. England was looking to repeat its Commonwealth Games heroics and knock Australia off for the first time on home soil, while the Australians hoped to move through the series undefeated and take home the title. While the battle on the court was heated, it was the battle of the minds off the court that counted the most with England coach Tracey Neville flexing her netball prowess. The Roses coach showed she was not afraid to pull punches bringing on the likes of Rachel Dunn who played a key part in unravelling the Australian Diamonds.

Dunn, who burst onto the scene in 2004 showed that age is no problem making her presence well and truly felt on the court slotting 24 from 25 at 96 per cent. Her smooth movement in the goal circle and impeccable timing proved to be hard to stop for the Diamonds who were without goal keeper Courtney Bruce. Neville’s genius to bring on the star goal shooter showed her hand when it comes to netball smarts. Dunn who had disappeared from the international scene for a while did not look like she had skipped a beat, pairing well with long bomb specialist Jo Harten and claiming Player of the Match credit to her accurate shooting. The unknown quantity was hard to combat with her experience, smooth movement and general netball smarts on show against the young defensive end of the Diamonds.

It was up to Diamonds coach Lisa Alexander to combat the tactical moves made by the Commonwealth gold medal coach who seemed to have all the answers. With Dunn excelling in goal shooter the tactical change from Alexander to bring on April Brandley in goal keeper stemmed the bleeding momentarily. While height may have been an issue, Brandley matched Dunn for aerial ability and netball smarts, slowly quelling the impact of the Roses goal shooter.

Thanks to her height and long wingspan, Layla Guscoth proved to be a dominant force in at wing defence for the Roses. Away from her typical home at goal defence, the now doctor and international netball player was a revelation in wing defence credit to Tracy Neville’s ability to think outside the box. Guscoth’s smothering defence was integral in disrupting the offensive play for the Aussies who rely on quick, short and sharp passes to penetrate the circle edge.

While Neville showed her hand in regards to tactical moves, the world number one coach did not shy away from the challenge. With injuries galore, Alexander proved that depth and versatility is one of Australia’s most important assets, bringing Steph Wood on into goal shooter to substitute Caitlin Thwaites, who at times struggled against Geva Mentor. Standing at 175cm, Wood proved that height is not all that matters with her dynamic movement and silky shots paying dividends for the Diamonds. In an unconventional move, Alexander gave arguably the world’s best defender something different to consider with Wood renowned for her excellent timing, base line drives and ability to sweep across the top of the circle.

“We really attempted to change the attacking strategy of being squashed into spaces by playing wider and with straight lines,” Alexander said.

Though Australia lost the match, they still claimed their third consecutive Quad Series title credit to their hard work, versatility and clever game play. However, Tracey Neville’s camp will feel as if they have the edge over the world number ones who were unable to get over the top of the Roses in what was a thrilling match.