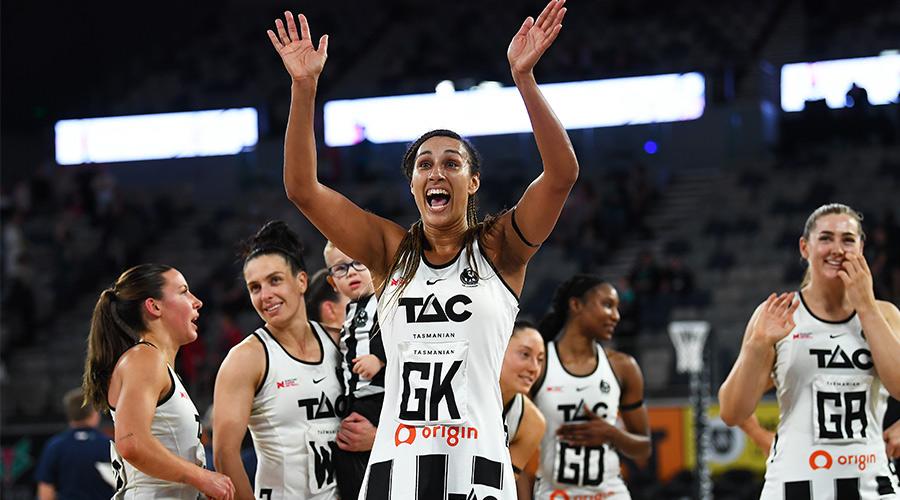 COLLINGWOOD have caused one of the upsets of the Super Netball season, beating the Vixens in the Melbourne Derby 70 to 60.

The Magpies got on top early in the first term. Their movement down court was smooth while their defence was strong.

The Vixens also looked rattled in the first quarter, as uncharacteristic misses from their shooters meant that they fell behind quickly.

As the first break came, the Magpies held a four goal lead, and looked the much better team.

The Magpies also came out the better side to begin the second term, but after the first timeout of the quarter, momentum started to change slightly. The Vixens got a bit of a run on and started to look more like the experienced and composed side fans are used to seeing.

After the Magpies stretched the margin out to seven goals in the early part of the quarter, the Vixens brought it back to within two.

The margin fluctuated wildly in the power five period, but ultimately the half time margin was five goals in the Magpies’ favour.

Although it was a mostly even third term, it still felt as though Collingwood was on top and were not going to let the Vixens back into the match.

Collingwood then really put the foot down at the back end of the quarter and started to stretch their lead out even further. As the teams turned for home the margin say at 10 goals in favour of the Vixens.

One thing that really let the Vixens down in the third term and continued to do so was the fact that their shooters were missing key shots, particularly the super shots, and then the Pies would rebound and convert down the other end.

The Magpies continued to be too strong for the Vixens in the last quarter. The Vixens were never in the match, and although the sides tied the final quarter the Pies went on to record a comfortable 10 goal win and take bragging rights in the crosstown rivalry.

For the Magpies, a clever strategy they used all game was bounce passes in the defence. With a taller than usual Vixens defensive trio to contend with, the bounce passes were more effective then lobs or chest passes.

In terms of star performances, Shimona Nelson was again accurate in front of goal, while Molly Jovic and Ash Brazill were once again workhorses in the midcourt.

For the Vixens, both shooters had low shooting percentages, but Kate Moloney was a workhorse in the midcourt. Her performance was particularly impressive when taken into consideration the fact that she had come out of Covid isolation only two days prior. Sharni Lambden was also impressive on debut in wing defence.

Next week sees the Vixens at home again, hosting the Firebirds, while the Magpies have got a trip to the opposite coast to face the Fever.

THE Sunshine Coast Lightning have dealt a serious blow to the finals hopes of the Queensland Firebirds, defeating their Queensland rivals by 19 goals, 82–61 in the Suncorp Super Netball (SSN) Round 11 contest yesterday. A particularly fruitful final term saw the Lightning dish out some payback after the Firebirds comprehensively beat them in Round […]