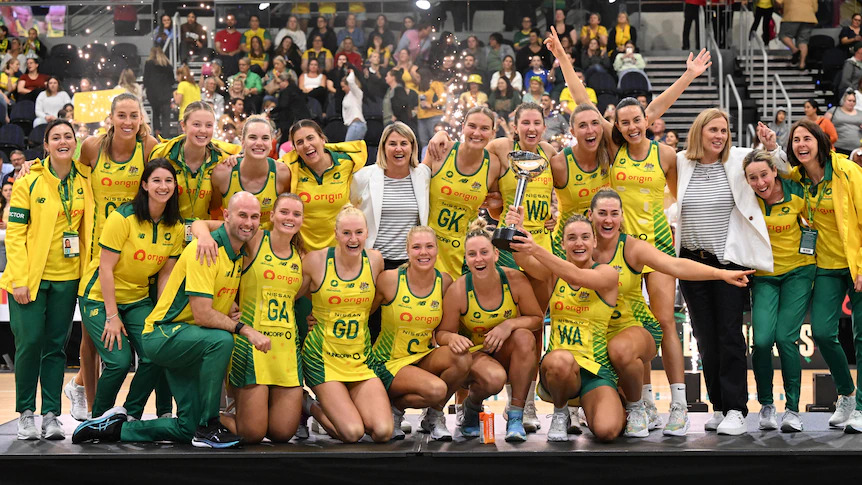 THE Aussie Diamonds have completed their Constellation Cup comeback on home soil, defeating New Zealand in the final test by four goals to tie the series but ultimately win the Cup on goal difference.

Despite New Zealand winning three of the four quarters, the third quarter that the Diamonds won was ultimately the deciding factor.

New Zealand came out firing in the opening quarter, and really brought the pressure early.

Both sides brought the intensity early, but the umpires made it clear that the physicality both teams had brought in game three was not going to be tolerated this time around.

Turnovers really cost the Aussies in the first quarter, as the Kiwis capitalised and built a handy buffer.

Their lead got out to as much as seven goals during the quarter, but the Aussies rallied late so the margin was half that at the first change.

In many ways the second quarter was much like the first.

It was high intensity, fast and free flowing quarter, with New Zealand not letting their foot off the pedal all quarter.

Although the Aussies tried to match it with the Kiwis, they just could not bridge the deficit and even let the lead slip out even further.

At the main break the margin has extended out to five goals.

The third quarter was when the Aussies started to really make their mark on the match.

Australia came out after half time a team on a mission.

It lifted its intensity, and combined with a number of crucial intercepts were able to outscore its opponents by double.

New Zealand regrouped in the last quarter and lifted its intensity.

As such it pulled off quite the late come back, and as the last few minutes drew closer, the margin kept shrinking and shrinking.

Despite the Silver Ferns ultimately winning the final quarter, it was not by enough as the Aussies held on for the four goal win and to take the series.

For the Aussies, Sophie Garbin (36 goals from 39 attempts) and Steph Wood (21 from 27) created a dynamic partnership in the circle, while Jamie-Lee Price (29 feeds, 10 assists) and skipper Liz Watson 31 feeds, 20 assists) also had great games.

Meanwhile for the Silver Ferns, Grace Nweke (39 goals from 43) had another great game under the ring, but much like in Test 3, unfortunately for the Silver Ferns she was on her own in terms of volume as Ameliaranne Ekenasio spent more time getting the ball down there than shooting.

Whitney Souness was another who had a great game for the visitors, finishing with 17 feeds and 12 assists.