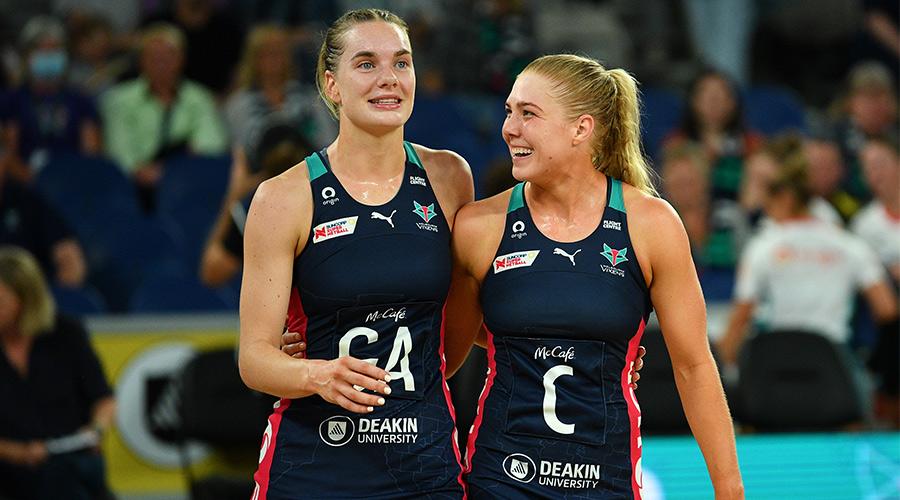 THE Melbourne Vixens are the last remaining undefeated side in the 2022 Suncorp Super Netball season, after they defeated the West Coast Fever 75-66.

A rare error in their front half left the Melbourne Vixens on the back foot early in the first quarter, and the Fever raced out to a 3-0 lead before Kiera Austin nailed the Vixens’ first goal of the match.

The Fever were able to maintain their lead for half of the quarter before an error in their forward half saw the Vixens capitalise and eventually eliminate the lead.

Then on the eve of the first quarter’s power five the Vixens capitalised on a forward third error from the Fever and took the lead.

Sasha Glasgow sunk a super shot to eliminate the lead with about two minutes to go, before the Vixens nailed two to retake the lead.

The Vixens found their super shot range late in the term, and by the time quarter time came around, the margin was six goals in their favour.

It was goal for goal early in the second term, but the Vixens kept growing their lead, which at one stage was as much as nine goals.

The Fever were able to peg it back significantly, getting it back down to as low as four goals halfway through the term.

As the power five period hit it the lead was down to two, and before anyone knew it the scores were all level again, and then it was the Fever leading again.

The Vixens then found their range from the super shot zone again, much like they had in the first term, and they had regained a handy lead for themselves.

Unlike the Vixens, the Fever shooters were not even attempting the super shots, preferring the safety of nailing the closer shots.

At half time the margin was five goals in favour of the Vixens.

The Vixens had another strong start in the third term, and were able to maintain their half time buffer.

On the eve of the third quarter super shot period, the margin had even increased to eight goals.

Fever coach Dan Ryan then made some changes down in his team’s attacking end in the hope of reinvigorating his side and bridging the gap.

It didn’t work as the Vixens remained on song under the ring and extended their lead even further.

At the final change the margin was eight goals in favour of the Vixens.

The Vixens extended their lead even further in the last term, and it was as high as eleven goals.

As the final super shot period of the game hit the margin was up to 14 goals, and just kept growing from there.

The Fever came back at the Vixens, but in the end the Vixens won by nine goals.

It was an all-round team performance from the Vixens, while for the Fever Jhaniele Fowler was left to do too much of the heavy lifting in the shooting department.

Both these teams don’t have long to wait until they take the court again. The Vixens are in Queensland on Saturday to face the Lightning, while the Fever return home to face the Swifts on Sunday.