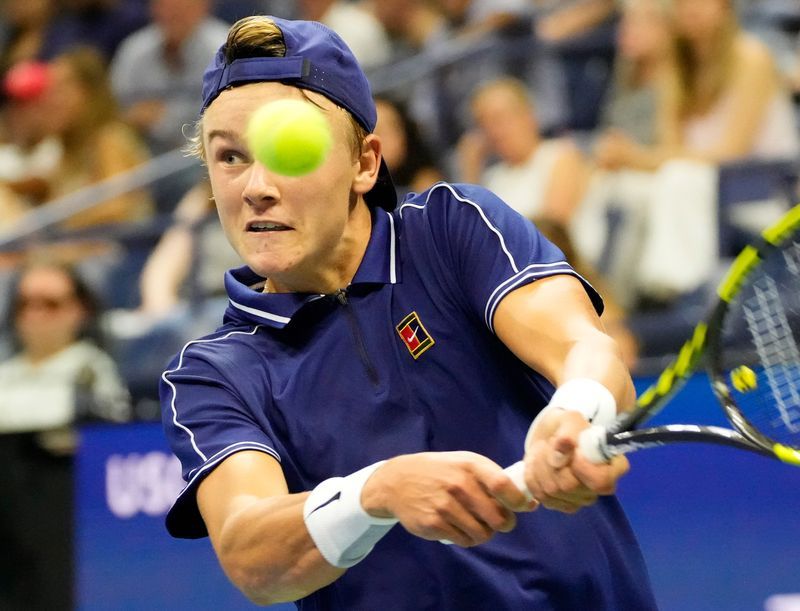 WHILE he may not quite yet have the same accolades as many of the talented young faces around him, there is no doubt Danish youngster Holger Vitus Nodskov Rune is on the way up in his career and has had a steady trajectory during his maiden year on the senior tour. A former junior world number one – as recent as March 2021 – the 18-year-old has transitioned fairly well to the senior tour this year and currently sits at a career-high 123rd in the world – not too shabby for a player who began the 2021 season at 474th in the world.

Where Rune enjoyed very little time on the ATP Tour during the interrupted 2020 season, he made up for it in droves during 2021 taking every opportunity to participate across a range of ATP Tour and Challenger events, willing to go through the hard yards of qualifying to reach his goal. He backed up his debut 2020 win against top 30 talent Benoit Paire with another confident oust of the Frenchman in Santiago, Chile in March, earning his first of two Tour-level quarter final berths at the ATP 250 event in the process, with his second try in Metz, France in September showcasing his growth as her overcame 24th ranked Lorenzo Sonego before falling in the quarters to 16th ranked Spaniard Pablo Carreno Busta.

Despite not making it further than the quarters on the ATP Tour, the teenager continues to prove that he is ahead of the pack when it comes to the Challenger Tour and somewhat sitting at a level between the two. Still a relatively raw prospect with a heap of potential, Rune has had an impressive year bowling through the Challenger events to boost his ranking with three titles to his name – two in Italy and one in San Marino – and as recent as August, proving he still has plenty left in the tank with a couple of opportunities still to come and potential of breaking into the Next Gen ATP Finals Race to Milan, sitting ninth on the current leaderboard.

While Rune achieved much of his junior success on the clay, he has proved throughout 2021 that he is more than a one trick pony, and although all three of his Challenger successes came on the clay, it was his 2021 US Open berth that proved that with a little time, he could really start to match it with the best. Coming through qualifying, Rune had one of the biggest names worldwide looming in his path as he headed into the Round of 128; Novak Djokovic. In perhaps the biggest match of his life, the Danish 18-year-old flew out of the gates in an impressive effort, firing on all cylinders to take the first set 6-1 and tested the world number one in a huge second set, reaching a tiebreaker. But that was where the dream ended for the teen, eventually falling to the experienced Djokovic in four sets, 1-6 7-6(5) 2-6 1-6, unfortunately succumbing to severe cramps during the third and fourth sets, unaccustomed to the tough Grand Slam circumstances and fitness level. Regardless of falling during the first round though, Rune showcased his intent with his immense opening set and second set effort and more than proved that he can fight well on the hard courts, too.

While there is no doubt Rune stay has a way to go, his potential speaks for itself after a solid first year on the ATP Tour. Including his Challenger, qualifying and ITF results, Rune has had a comprehensive season across a combination of hard and clay courts, with a 60-24 win rate overall. While Rune sits on a shaky 6-11 win-loss record on the ATP Tour, that record leaps up to a whopping 30-8 on the Challenger Tour, and factoring in that almost all of his tour-level losses came against top 100 talent, there is plenty for the 18-year-old Danish talent to build on for the future.