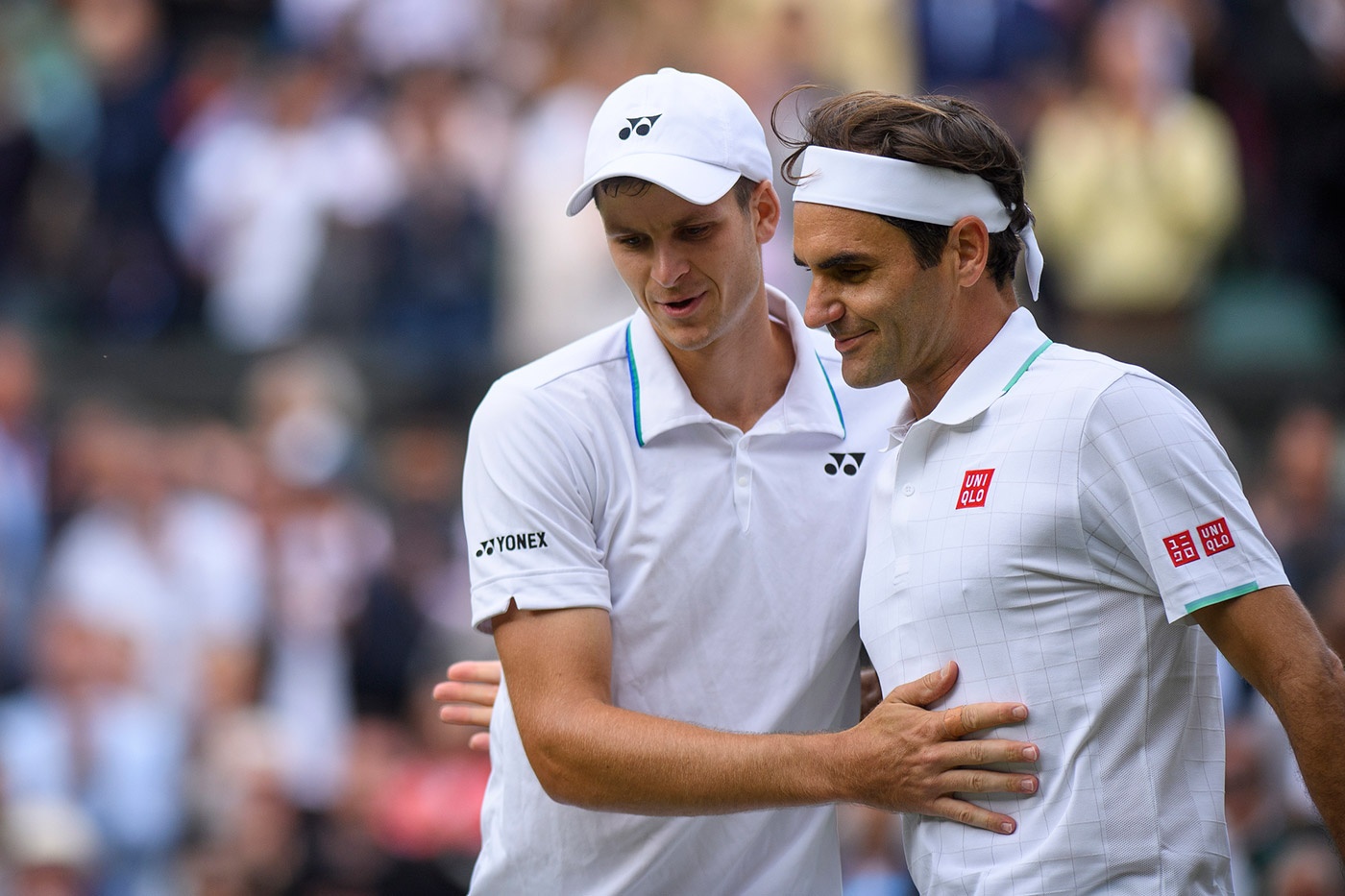 HUBERT Hurkacz has continued his stunning Wimbledon run with another huge scalp this week, defeating his second straight top 10 seed in two days with a straight sets upset over Roger Federer. Meanwhile, it was all systems go for the remaining favourites, as all three claimed the upper hand.

It was Hurkacz’s composure and consistency under pressure which handed him a daring 6-3 7-6(4) 6-0 win over the Swiss Maestro, winning 79 per cent of his first serve points credit to his 10 aces and 36 winners. While Federer hit almost as many winners registering 34 for the game, it was the unforced error count between the two (31-12) that really raised eyebrows, as Hurkacz’s cleanliness paved the way, despite the huge obstacle he was facing.

“Obviously I was a little bit nervous,” Hurkacz said post-match. “I mean, playing against Roger in a Grand Slam quarterfinal, it’s a very big thing for me. But I was trying to stay as calm as I could.

“I was trying always to believe myself during the match and just trust my game and stay as aggressive as I could.”

“Walking off the court realising that I won against Roger, I mean, [it] just kind of dream come true, especially here on grass in Wimbledon,” he said. “It felt so special with the crowd around as well.”

But while the win was a milestone for Hurkacz, it was a disappointing reality for Federer, who was “bagelled” at Wimbledon for the very first time during the 6-0 third set, and was aiming to reach the Wimbledon semi finals for a record-extending 14th time off the back of two knee surgeries last year.

“The last 18 months have been long and hard,” Federer said during his post-match press conference. “I felt very disappointed in the moment [of defeat] itself. I still am. I feel horribly exhausted. I could go for a nap right now. You put everything on the line, and when it’s all over you could just go sleep because you’re so exhausted from mentally pushing yourself forward, and trying everything.”

The champion is also all too aware that time could be running out for him to take out another grand slam title, although made it clear that an immediate retirement is not in the cards.

“No, it’s just about having perspective. You need a goal when you’re going through rehab. You can’t think of the entire mountain to climb at once. You got to go in steps. Wimbledon was the initial first super-step.

“As you can see, it was a struggle for me and putting in extra effort all the time, especially when things got difficult against Hubert. I knew it was going to be really hard. Now I just got to talk to the team, take my time, take the right decision.

“Clearly there’s still a lot of things missing in my game that maybe 10, 15, 20 years ago were very simple and very normal for me to do. Nowadays they don’t happen naturally anymore. I got to always put in the extra effort mentally to remember to do this or do that. I have a lot of ideas on the court, but sometimes I can’t do what I want to do.”

Matteo Berrettini will take on the rising Pole next, following a 6-3 5-7 7-5 6-3 sweep of Canadian Felix Auget-Aliassime. It was the Italian’s 10th consecutive grass court win and another one to add to his current winning tally – now at 23 wins from the past 26 matches – and makes Berrettini the first Italian to reach the Wimbledon semi finals in the Open Era.

“Everything is crazy right now. Thanks to Felix, I think we made a great match and I hope you guys enjoyed it,” Berrettini said in his on-court interview. “He’s probably one of my best friends on tour, so it’s never easy to play against him. But that’s sport and I’m really happy.”

“I think we know each other pretty well. We played just once in a tournament on grass two years ago, but for sure he improved, I improved,” Berrettini said. “Today was really tricky. It’s always special to play on such a nice court, so it was really difficult. Good luck to him, but now I’m happy for myself.”

The second semi final will contest between world number one Novak Djokovic and 10th seed Canadian Denis Shapovalov, with the former recording his 100th grass court win over Hungarian Marton Fucsovics in two hours and 17 minutes, 6-3 6-4 6-4, while the latter outlasted Russian Karen Khachanov in a huge three hour and 26-minute clash, going all the way to a 6-4 3-6 5-7 6-1 6-4 five set result.

Competing in his maiden grass court quarter final – and only his second grand slam quarter overall – Shapovalov broke new ground to reach his maiden semi final berth, explaining that he drew on his US Open quarter finals experience to claim the win this time around.

“I think going into the fifth set today was exactly what I took. I was in a similar position against Carreno Busta (Pablo Carreno Busta) at the US Open. I won the fourth set really easily,” Shapovalov said. “It kind of allowed myself to just, like, relax a little bit and think that everything’s under control, that I have momentum. Then things kind of turned quickly.

“So, I knew going into the fifth set I’ve got to leave everything I have on the court for every single point that I play. I really felt like I was really in every single return, every single shot. That’s the difference I made.

“After the fourth set, I told myself, just using that experience from the US Open, this is what I want to change and really start the set off well. I think my game just elevated. It’s something to be super, super proud of myself for.”

“Definitely a super difficult match ahead of me. I believe in my game. I think I’ve been playing really, really good tennis. To beat these players with the way I’ve been playing, it’s not easy to do,” Shapovalov said. “So, I have full belief in myself and in my game that I’m able to win on Friday.

“I think when you’re at the semi-finals of a tournament, there’s not really underdogs. Honestly, it’s been great. Even today when I played the fifth set, I felt super, super fresh. I feel fresh now. Hopefully, that continues.”

Djokovic’s confident form has continued, and why would it not with 32 wins from 35 matches for the year so far, not dropping a set as he reached his 10th Wimbledon semi final. He also leads Shapovalov 6-0 in their head-to-head, proving his confidence is not for naught.

“It was kind of up and down. I thought I played extremely well the first five, six games,” Djokovic said. “Had a couple set points, 5-0, 5-1 also couple set points. And then some long games.

“Overall, I feel like I’ve been playing, hitting the ball well throughout the entire tournament, putting myself exactly where I want to be: semi-finals. Not spending too much energy. Now I really have to be consistent from the first to last point in next match, and hopefully another one on Sunday.”

As for Shapovalov, Djokovic said he expects the lefty to be a huge task to overcome on the grass.

“He has really an all-around game,” Djokovic said. “Huge serve, lefty, which is always tricky to play someone who is left-handed on the quick surfaces. He’s comfortable coming in to net. I think his movement has improved. Due to better movement, he’s probably making less errors, which was probably the part of his game that was always troubling him.

“I’m sure that that’s going to be the biggest test I will have so far in the tournament, which is also expected. It’s semi-finals. I’m looking forward to it. It’s going to be a battle and I need to be at my best.”