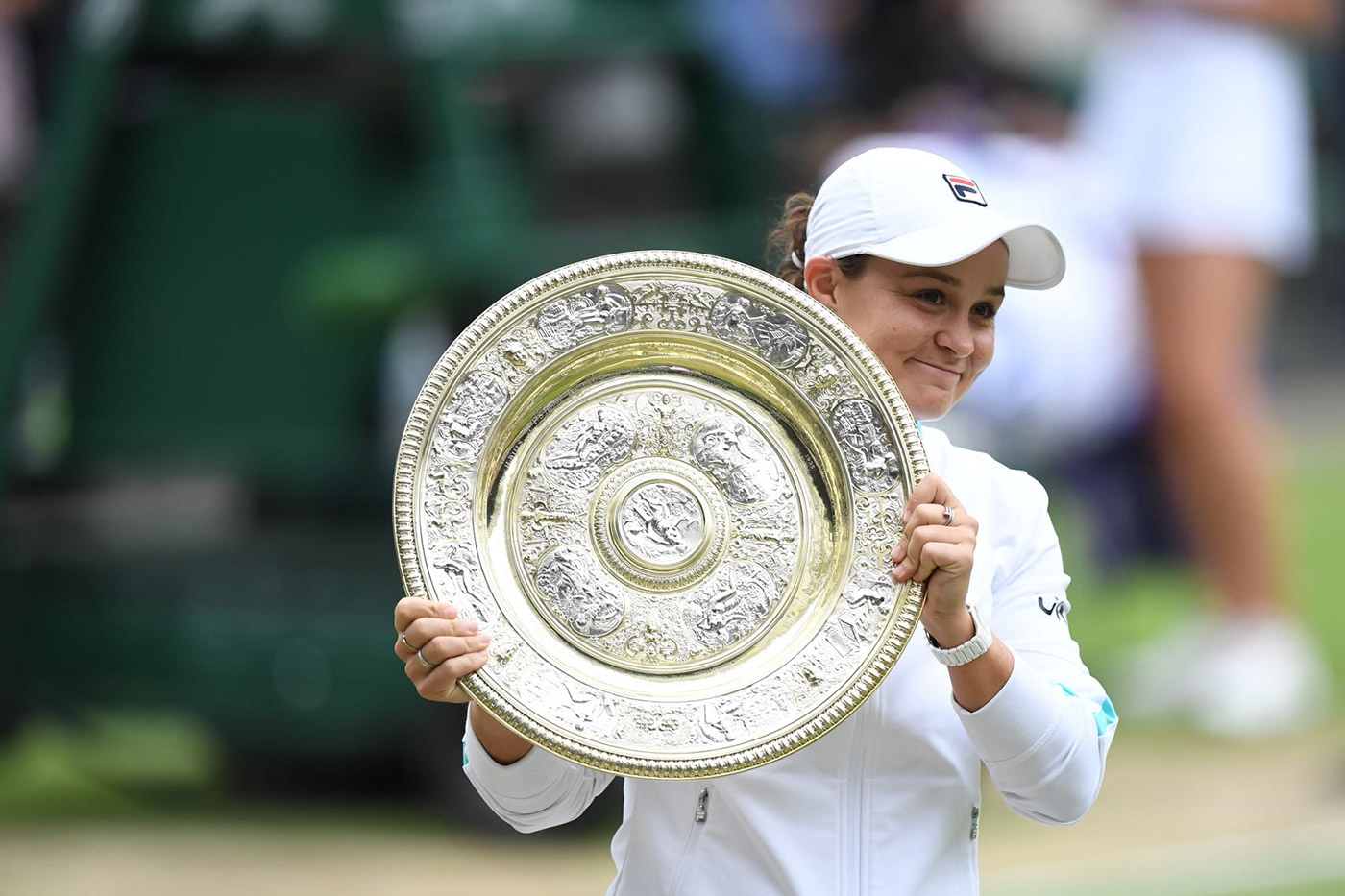 AUSTRALIAN icon Ash Barty has cemented herself as one of the best athletes in the world, claiming her second Grand Slam title with a three-set win over a slow-starting but determined Karolina Pliskova at Wimbledon last night. The Australian world number one dominated the early proceedings and did enough to take the first set, before Pliskova fought back to claim the second, and forced Barty to win in three, 6-3 6-7 6-3 in one hour and 56 minutes.

The final statistics of Barty’s three more winners (30-27) and three less unforced errors (29-32), and only 10 more points overall (88-78) showed a tight contest, though the early stages suggested anything but a two-horse race. The Australian won the first 14 points – and 16 of the first 17 – to race to a 4-0 lead and be serving for a fifth straight game.

Remarkably, Pliskova completely turned it around to break to love for her first game, only for Barty to break straight back. The Czech broke a second time and held to love to move to 3-5 and force the Australian to serve for the first set for a second time. This time Barty made no mistake.

The second set started similarly with Barty grabbing an early break after holding her serve in the second game to get out to a 3-1 lead. At 30-30, it was at a critical junction for Pliskova, whom a second break would seemingly put a line through her Wimbledon chances. She dug deep with some exquisite shot play,, reeling off nine straight points to hold, break to love and go 40-0 up in the sixth game, eventually holding again to take the lead at 4-3 for the first time in the match.

Barty found her form on serve again and the match seemed destined for a tiebreaker as both played held to love. At 5-5, Pliskova was 40-0 up and in control of a rally, needing just a simple volley off a defensive effort from behind the baseline from Barty to move one game away from the set. Instead, her volley hit the net, and Barty went on to win five straight for the game and break to give herself a chance to serve for the match.

In true Pliskova style, it was never going to be that simple for Barty, as Pliskova pulled out the stops to break and force a tiebreaker. Serving the better of the two players in the tiebreaker, the Czech was able to capitalise off some of Barty’s second serves – with some help from the netcord – to move to 6-2 and have four set points. The Australian managed to claw back two points, but a double fault at 4-6 handed Pliskova the second set.

As if the luck was all with the eighth seed, Pliskova had another saving netcord in the opening game of the third set at 0-40 which forced the game back to deuce, but the Australian held her nerve, and then forced another Pliskova error to break her opponent and held for a 3-0 advantage. Once again Barty was in control and just three games away from a Wimbledon trophy. Both players held their next few games with some remarkable net play treating the crowd – which was heavily favouring the underdog – to bring it to 5-2.

Pliskova needed to find something magic, and after some great approaches, it was a powerful ace to hold at 3-5. She had a break point in the ninth game, as an uncharacteristic simple volley from Barty went into the net, only for the Czech to miss a down the line chance in return. Back at deuce, Barty put down an exclamation mark with an ace to bring up her first match point, then showed she did not need a second chance, forcing an error off the racquet of the Czech from the baseline into the net, enabling her to etch her name into Wimbledon history.

“It was the most incredible feeling I think I’ve ever experienced on a tennis court,” Barty said post-match. “There was certainly disbelief. I think I’ve worked so hard my whole career with my team and with people that mean the most to me to try and achieve my goals and my dreams. To be able to do that today was incredible.”

The first Australian female in 41 years to lift the Wimbledon crown since Barty’s idol Evonne Goolagong Cawley achieved the same feat. Such was her impact in paving the way for Barty, the modern day tennis play wore a scallop-hemmed dress in tribute to Goolagong Cawley, who claimed her first Wimbledon title 50 years ago in 1971.

“Australians have such a rich history in sport, and I think being able to be a very small part of that is something I always dreamt of,” Barty said. “Try and create a legacy, try and create a path for young girls and boys to believe in their dreams. “Being able to kind of live through that and learn my lessons along the way has been some of the best parts of my journey.

“To be able to be successful here at Wimbledon, to achieve my biggest dream, has been absolutely incredible. The stars aligned for me over the past fortnight. “Incredible that it happened to fall on the 50th anniversary of Evonne’s first title here, too.”

On the match, Barty said there were some highs and lows for her and Pliskova, but felt she had been able to keep it on track throughout the almost-two-hour contest.

The Wimbledon title is the 12th of Barty’s WTA Tour career, and the second Grand Slam behind her 2019 Roland Garros crown. The Australian will now prepare for the hard court tour with the US Open the final Grand Slam to be played out this year.