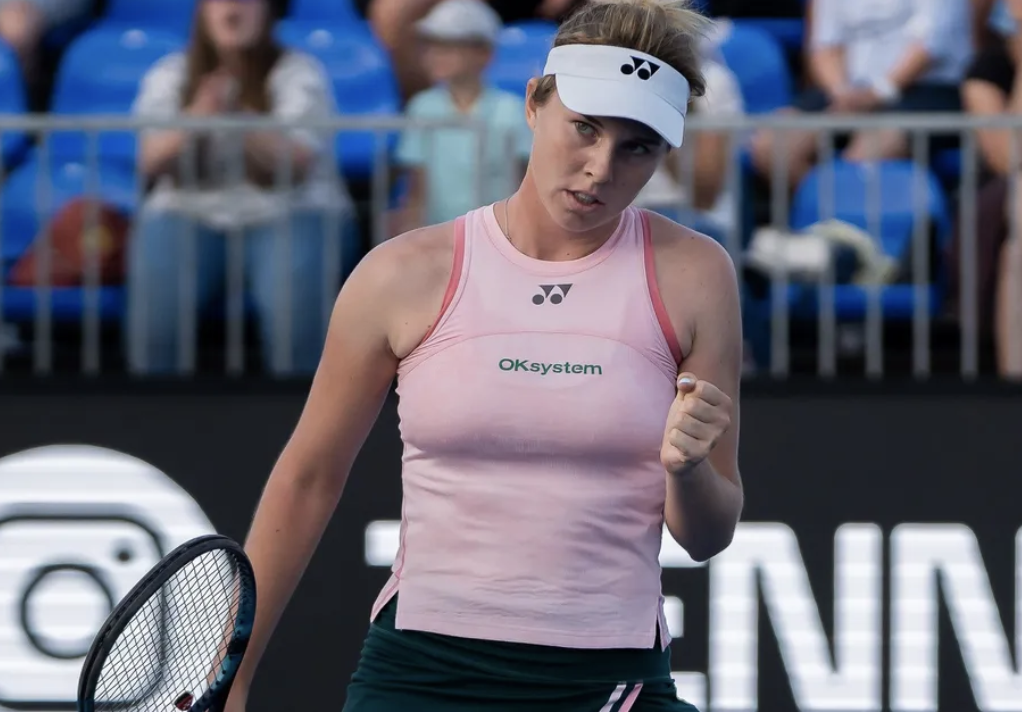 TEENAGE future star Linda Noskova has claimed the biggest win of her career, defeating Alize Cornet to make it back-to-back victories on the WTA Tour. The Czech young gun had not won a WTA main draw match prior to entering the Prague Ladies Open WTA 250 event, but now the wildcard has strung together two victories to reach the quarter finals of the event.

Noskov won through to the Round of 16 via a retirement to Natalia Vikhlyantseva, with her first official completed win at the level coming against the 38th ranked Cornet overnight. The 17-year-old 112th ranked Czech won 7-5 1-6 7-6, getting up 9-7 in a ridiculous finish to the thrilling three-set match. It lasted two hours and 23 minutes, with Noskova bouncing back from a disappointing second set, to hold her nerve in crunch moments and take out the win.

Noskova only served the three aces for seven double faults – compared to Cornet’s eight and six respectively – and even had lower serving success rate percentages of 69 and 46 per cent. Her French opponent notched up 75 and 48 per cent, and won a higher total amount of points, but a lot of that came through the second set where Cornet was near-flawless. The nail-biting victory which went right until late in the third set tiebreaker with both players having chances, set up a quarter finals clash with Japanese lucky loser Nao Hibino, who upset second seed and home nation talent Barbora Krejcikova.

Looking at the other WTA Tour event in Warsaw, top seed Iga Swiatek continued her crushing way through Warsaw with a 6-3 6-2 victory over Romanian lucky loser Gabriela Lee. The top seed was joined in the quarter finals by fellow seeds Caroline Garcia and Petra Martic. Italian Jasmine Paolini – seeded 10th after some late withdrawals – won through to the quarter finals with an unusual scoreline of 6-1 6-7 6-0 against Frenchwoman Clara Burel, while Ukrainian lucky loser Kateryna Baindl (nee Kozlova) defeated Italian qualifier Sara Errani.

Three of the four Kitbuhel quarter finals were completed on the ATP Tour, as Spanish duo Roberto Bautista Agut and Albert Ramos-Vinolas both advanced to the final eight. German Yannick Hanfmann took down Austrian Dominic Thiem in three sets 6-4 3-6 6-4, and will face the winner of tomorrow’s last quarter final – between Filip Misolic and Dusan Lajovic – later in the day.

Back to the Round of 16 results, Umag’s top seed Carlos Alcaraz continued his run to the title as overwhelming favourite, defeating lucky loser Norbert Gombos in straight sets to reach the quarter finals stage. The player who beat him in Hamburg – Lorenzo Musetti – was ousted by another Italian in Marco Cecchinato, with the qualifier joined in the last eight by compatriot Franco Agamenone. Argentinian Facundo Bagnis also made the last eight.

Finally across to the United States and the quarter finals have been decided in Atlanta, with third seed Australian Alex de Minaur taking care of compatriot James Duckworth in straight sets, 6-4 6-4. It was a similar story for both second seed John Isner and sixth seed Jenson Brooksby, who defeated fellow Americans Ben Shelton and Mackenzie McDonald in their Round of 16 matches. In the other clash, French lucky loser Adrian Mannarino knocked off wildcard Andres Martin – who took down Thanasi Kokkinakis in the first round – to reach the quarter finals.