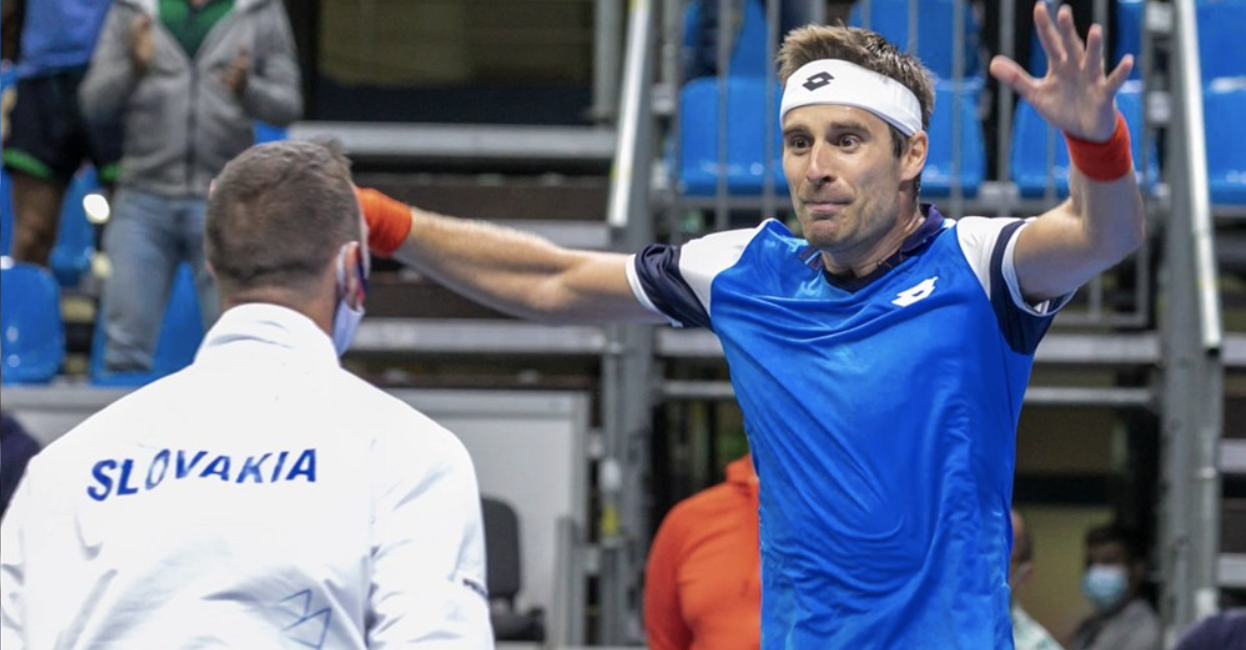 A SENSATIONAL smashing in front of a home crowd by Norbert Gombos has lead to Slovakia picking up the Davis Cup World Group I win over Chile and booking their spot in the 2022 World Group Qualifiers. They joined Norway, Republic of Korea and Finland as the other impressive winners, whilst Peru got up in a five-game tie over Bosnia and Herzegovina in an upset.

A stunning thrashing of Top 30 Chilean talent Cristian Garin has seen Gombos be the unlikely hero of the Davis Cup round, winning both singles to send Slovakia into the World Group Qualifiers next year. Gombos fought hard to defeated Nicolas Jarry in the first clash, winning 6-3 6-7 6-3, but with the game on the line, Gombos played one of the most dominant games of his career with a 6-0 6-1 shellacking of Garin to hand his nation the win. Garin was the only one from his nation to grab a victory, defeating up-and-comer Alex Molcan in straight sets to open the tie, but the Gombos wins, paired with Filip Polansek and Igor Zelenay‘s doubles win, and Slovakia got the job done in front of home fans.

Casper Ruud unsurprisingly led Norway to victory over Uzbekistan at home, wrapping up the tie in four matches. Whilst Ruud and compatriot Viktor Durasovic lost to Denis Istomin and Sanjar Fayziev in straight sets in the doubles, the singles ties went all the way of the home nation. Ruud took care of Khumoyan Sultanov and Fayziev, with Durasovic knocking off Istomin in an impressive performance, not dropping a set in any of the singles ties to walk away with an eye-catching win.

The only Top 100 player in the tie, Soonwoo Kwon has helped lead South Korea to victory over New Zealand in the United States. Kwon won both his singles ties in straight sets, defeating Kiwi duo, Finn Reynolds and Rubin Statham. Jisung Nam also defeated Statham comfortably with a 6-2 6-2 thrashing, whilst the experienced doubles combination of Marcus Daniell and Michael Venus won the tie for the “home” team as expected.

Peru (3) defeated by Bosnia and Herzegovina (2)

Peru has come from a 2-1 deficit down to hold off Bosnia and Herzegovina and win in five ties as predicted in the preview. Much of the work for Bosnia and Herzegovina was expected to be left to Damir Dzumhur, and he got the tie off to a perfect start against Nicolas Alvarez in a closer-than-expected three sets. Juan Pablo Varillas then levelled the tie with a straight sets win in the singles, before the doubles pairing of Mirza Basic – after a loss to Varillas – and Tomislav Brkic put the visitors one win away from victory. Varillas stepped up to the plate with a massive win over Dzumhur to give Peru the huge upper hand, and Nicolas Alvarez took it with a straight sets win over the 316th ranked Nerman Fatic to send his side into the World Group Qualifiers.

Four different Finnish players enjoyed success in the Scandinavian nation’s victory over India in their home tie. Otto Virtanen and Emil Ruusuvuori both won in straight sets over their much older opponents in Prajnesh Gunneswaran and Ramkumar Ramanathan, but it was the doubles combination of Harri Heliovaara and Henri Kontinen taking out the ultra-experienced doubles pairing of Rohan Bopanna and Ramanathan that sealed the deal. Gunneswaran then won a dead rubber over the 491st ranked Patrik Niklas-Salminen to get India on the board before the final singles match was called off.