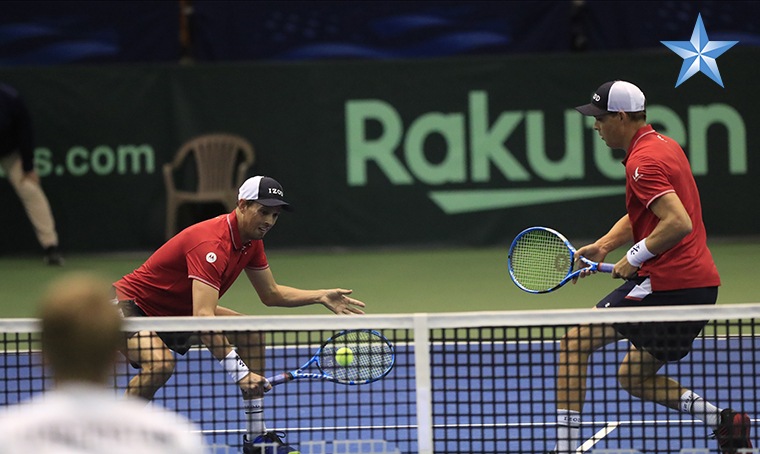 OF the 12 teams to qualify for the Davis Cup Finals in November, 10 of those moving through qualifying were the home nation in their respective ties over the weekend. So strong was the home court advantage or home nation support, was that the number two and three seeds were bundled out, with only the eleventh seed Japan getting ousted at home. Aside from Ecuador’s upset win over Japan, ninth seed Czech Republic was the only other team to win in a foreign nation, defeating Slovakia to book a spot in the final 16.

The number one seeds advanced through without too much trouble, as Marin Cilic won both his singles matches in very different circumstances. He downed Ramkumar Ramanathan 7-6 7-6 – both 10-8 in the tiebreakers on Day 1, before smashing Sumit Nagal on Day 3 with a 6-0 6-1 rout. Borna Gojo also won his singles, having to come from a set down against Prajnesh Gunneswaran 3-6 6-4 6-2. India had a reason to celebrate in the doubles however, with Rohan Bopanna and Leander Paes – both well into their 40s – winding back the clock to defeat Mate Pavic and Franko Skugor 6-3 6-7 7-5 to ensure India had a win on the board in the tie.

Hungary fought back from a 2-1 deficit to defeat second seeds Belgium in front of a home crowd and book its spot in the Davis Cup Finals. Without David Goffin, Belgium got off to a solid start with Ruben Bemelmans defeating Attila Balazs 5-7 7-6 6-4, before Marton Fucsovics levelled the scores for Hungary with a 6-2 5-7 6-4 victory over Kimmer Coppejans. The visitors again took the lead after a doubles win courtesy of Sander Gille and Jordan Vliegen, who downed Balazs and Fucsovics 3-6 6-1 6-4. The pair managed to pick up the slack again on the third day and carry the nation to victory with Balazs defeating Coopejans in straight sets, then Fucsovics coming from a set down to win against Bemelmans, 6-7 6-4 6-2 and send his nation to the Finals.

Daniel Elahi Galan is the toast of Colombia after guiding his nation to the Davis Cup Finals with two singles victories against Argentina. Playing against the higher ranked Leonardo Mayer and Juan Ignacio Londero, Galan was able to control play and win both comfortably in straight sets. With the number one doubles combination in the world in Juan-Sebastian Cabal and Robert Farah ensuring that they took out the doubles tie, it handed the South Americans a spot in the next round. Londero was the sole success story for the visitors, coming from a set down to knock over Santiago Giraldo 6-7 6-3 6-2 in the second rubber of the tie.

It was expected and it lived up to fruition – a United States whitewash over Uzbekistan to quickly move through to the next round. Not taking any chances, the home side put up Reilly Opelka and Taylor Fritz on the opening day who waltzed past Denis Istomin and Sanjar Fayziev in straight sets respectively, before the Bryan brothers did the same thing to the Uzbekistan pair in the doubles. With the tie wrapped up, the United States handed Tommy Paul a Davis Cup debut and he trounced Istomin 6-3 6-0 for a 4-0 win.

Missing both of their top preferences for the singles in Alex de Minaur and Nick Kyrgios, Australia still moved through to the Davis Cup Finals, but not without a sterling challenge from a much lower ranked Brazilian outfit. Jordan Thompson won in straight sets over Thiago Monteiro in what was expected to be a danger game for the Australians, but instead it was the remainder of the matches that pushed the green and gold to the limit. John Millman led the team in the absence of de Minaur and Kyrgios, triumphing in both singles matches from a set down, defeating up-and-coming talent Thiago Seyboth Wild 4-6 7-6 6-2 and then Monteiro 6-7 7-6 7-6 to ensure the home team moved through. Brazil did claim a win in the doubles however, with Marcelo Demoliner and Felipe Meligeni Rodrigues Alves winning 5-7 7-5 7-6 against John Peers and debutant, James Duckworth.

Another predicted whitewash occurred with Italy trouncing South Korea behind closed doors without dropping a set. With the exception of Gianluca Mager‘s 6-3 7-5 win over Ji Sung Nam, the South Koreans did not win more than four games in a match with Fabio Fognini smashing Duckhee Lee 6-0 6-3, Stefano Travaglia winning over Yunseong Chung 6-0 6-1, and the pair of Fognini and Simone Bolelli defeating Nam and Min-Kyu Song 6-3 6-1 in the doubles.

In one of the more feel-good Davis Cup ties of the weekend, the spectators got their money’s worth with the full five matches being played and Germany getting up 4-1. Jan-Lennard Struff got the home nation off to the perfect start with a 6-4 6-4 triumph over Ilya Ivashka, before Egor Gerasimov took advantage of an underdone Philipp Kohlschreiber 4-6 7-5 7-6 in a come-from-behind win to level the tie at 1-1. Germany’s doubles team of Kevin Krawietz and Andreas Mies won 6-4 7-6 over Ivashka and Andrei Vasilevski, before Struff continued his form with an impressive 6-3 6-2 victory over Gerasimov to win his nation the tie. Whilst many other ties packed it in after the result was decided, Germany and Belarus opted to blood debutants in Dominik Koepfer and Daniil Ostapenkov for the fifth and final rubber, with the former ending up playing a match to remember in a 6-0 6-2 smashing to make it a 4-1 result.

Despite dropping the first match of the tie, Kazakhstan came back to post a 3-1 victory over Netherlands and live up to its eighth seed billing. Robin Haase got the visitors excited early with a 6-4 6-7 6-3 win over Mikhail Kukushkin, but Alexander Bublik came to town with a 7-6 7-6 narrow win over Tallon Griekspoor. The Kazakhstan duo of Andrey Golubev and Aleksandr Nedovyesov won 6-3 6-3 over Haase and partner Jean-Julien Rojer, before Bublik again got the better of an overloaded Haas, 7-6 6-1 to help Kazakhstan move through to the 16-team Davis Cup Finals.

Jiri Vesely has steered Czech Republic to a solid 3-1 win over Slovakia to ensure it moved onto the Davis Cup Finals. The top ranked player in the tie defeated Jozef Kovalik 6-3 7-5, then took down Andrej Martin in three sets, 4-6 7-5 7-5. Lukas Rosol won his singles clash in the second rubber with a 6-4 6-4 triumph over Martin, while the home team scored a win with Filip Polasek and Igor Zelenay winning in straight sets over Czech pair, Jonas Forejtek and Zdenek Kolar 6-4 6-4.

Despite his best efforts, Pablo Cuevas was unable to carry his Uruguayan nation to victory over Austria, suffering a 3-1 loss. Cuevas won a tough singles tie against Jurji Rodionov 6-7 6-3 7-6 on the opening day, but went down with Ariel Behar in the doubles against Oliver Marach and Jurgen Melzer in three sets, then suffered defeat against a well rested Dennis Novak despite winning the first set, losing 2-6 6-3 6-4. Cuevas’ brother Martin also played on the opening day and lost his singles tie to Novak, 6-2 6-4. With only three players actually ranked on the ATP Tour, Uruguay has been amazing to get as far as it has to-date, but Cuevas can only do so much.

Unlike the Germany-Belarus clash, Japan and Ecuador both wanted to done-and-run it in front of an approximate crowd of zero people. With the threat of the coronavirus prevalent, Japanese officials were very wary and closed off the Davis Cup tie to the public. Despite heading in as favourites, top Japanese player Kei Nishikori did not take the court, and the Ecuadorians went on to down with a 3-0 domination of their opponents. Emilio Gomez defeated Go Soeda 7-5 7-6, Roberto Quiroz just got past Yasutaka Uchiyama 7-6 2-6 7-6 in a 10-8 deciding tiebreaker, before Diego Hidalgo and Gonzalo Escobar won against Uchiyama and Ben McLachlan 7-6 6-3 to wrap up the tie. Needless to say given the already high anxiousness around the tie, Japan pulled the pin with the result done and dusted.

In the final tie, Chile was without top player Cristian Garin and it showed with Mikael Ymer getting the better of lower ranked Chilean opponents at home to guide his nation to a 3-1 victory. Ymer downed Marcelo Tomas Barrios Vera 6-2 6-3 on the opening day, then backed it up with a 3-6 7-5 6-3 come-from-behind win over Alejandro Tabilo in the fourth rubber. Experienced doubles combination Markus Eriksson and Robert Lindstedt were too strong for Barrios Vera and Tabilo in the doubles, with Tabilo getting Chile’s only win of the tie the day before against Elias Ymer 6-4 6-3.