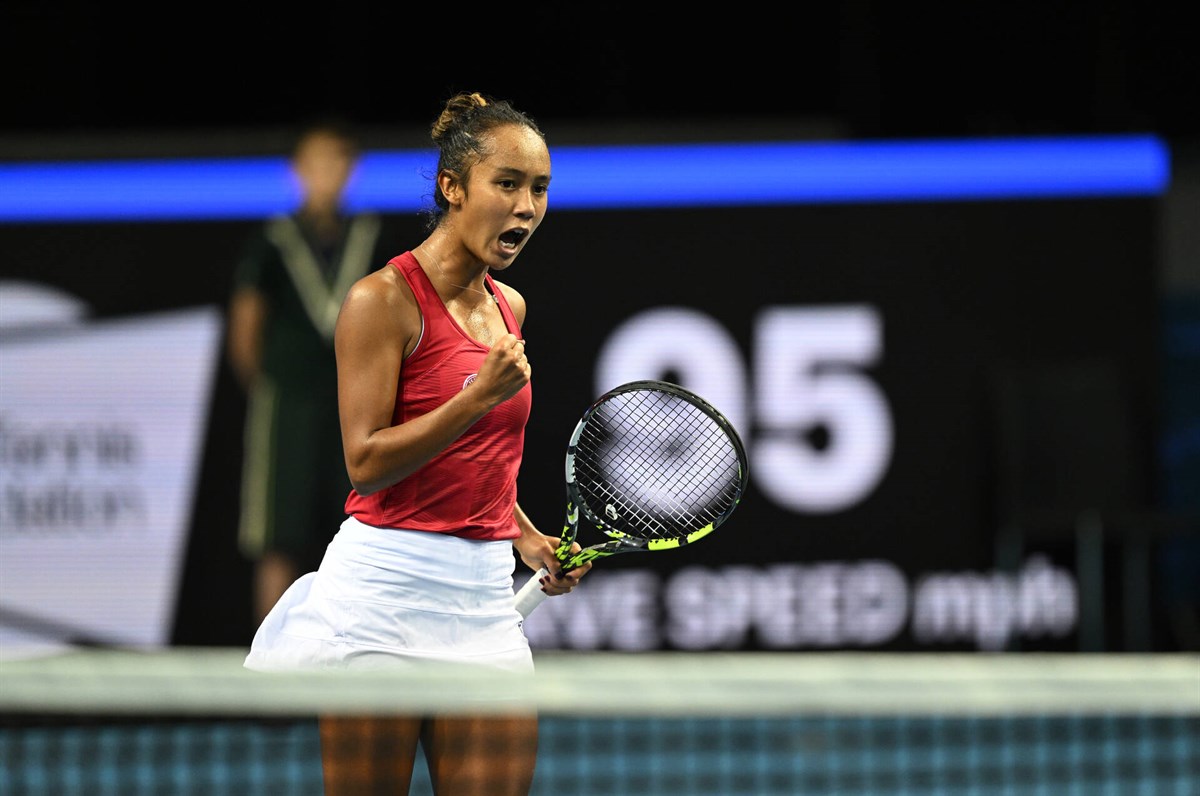 CANADA has set up a virtual elimination final with top seeds Switzerland after sweeping Italy 3-0 in convincing style. The North American nation handed the Italians their second successive 3-0 sweep after Italy copped a similar beating from the Swiss the day before. On this occasion, it included a double-bagel 44-minute obliteration from US Open finalist Leylah Fernandez who was at her brutal best, also dominating in the doubles to drop just two games in four sets.

Before Fernandez took the court, it was Grand Slam winner Bianca Andreescu representing the nation for the first time since 2019. On the hard courts of Glasgow, Andreescu had a fight on her hands against Italian Elisabetta Cocciaretto, but managed to get through with a 7-6 6-3 victory. The first set saw the Canadian hit 12 winners to eight, but also hit a loose 22 unforced errors to 20, and miss all four of her net points. Still, Andreescu did enough to force a tiebreaker – winning 65 per cent of her second serve points helped – and won it 7-3.

The second set was an improvement from the Canadian, who hit another 12 winners, but reduced down to 16 unforced errors. Cocciaretto also reduced her errors by eight, but only hit the five winners as Andreescu controlled the rallies. An 80 to 54 per cent first serve winning rate was the difference between the players, though ultimately Andreescu would have liked her 56 per cent efficiency to be higher. A second break in the set allowed her to win it in 48 minutes, 6-3 to complete the match in an hour and 51 minutes and put the Canadians one-up.

Fernandez’s match with Italian Martina Trevisan could not have been any more different. In just 44 minutes – less than one set for the earlier game – the world number 40 completely destroyed the world number 28, 6-0 6-0. The first set alone was clinical with Trevisan winning just four points for the entire set that lasted 18 minutes. Fernandez broke the three times from four chances and her opponent won just one point on serve – two winners – and produced 14 unforced errors. By comparison, Fernandez hit just two unforced errors – and unsurprisingly no forced errors – in one of the best sets of the year.

The second set went down a similar path aside from the fact that Fernandez’s serve let her down a touch. Though she won seven of eight points off her first serve, she only recorded a 47 per cent efficiency. Still, Fernandez hit nine winners for six unforced errors – and again no forced errors – while Trevisan only managed the two winners for 12 unforced errors and a total of 11 points won. Fernandez did not play at her best, but Trevisan was certainly at her worst, and it resulted in a double-bagel.

Coming straight off that annihilation, Fernandez stepped into doubles with world number seven Gabriela Dabrowski, up against Jasmine Paolini and Lucia Bronzetti, both of whom are not specialist doubles players. It went as well as one might expect, with Canada running out a 6-1 6-1 winner. Lasting just 46 minutes – only two more than Fernandez’s singles match – the pair hit 11 winners to five and only 19 unforced errors to 26, while breaking five times to nil in a complete rout. The victory meant the winner of Switzerland and Canada will advance to the semi-finals tomorrow.

Despite missing crucial singles and doubles talent Barbora Krejcikova, Czech Republic set up a virtual elimination final with the United States, overcoming Poland 2-1 to knock the Polish out of contention. Though Magda Linette has enjoyed a good tournament – defeating Karolina Pliskova to back up her win over Madison Keys – it would not be enough, with Karolina Muchova defeating Magdalena Frech 6-2 6-2, and then in the final match, the doubles pairing also won. Marketa Vondrousova replaced Krejcikova in the doubles with Katerina Siniakova, and easily took care of Linette and Katarzyna Kawa.

There was a boil over in Group C, with Great Britain stunning Spain in front of home fans to win 3-0 and book their spot in the semi-finals. Coming off a loss to Kazakhstan the day before, Great Britain needed a cleansweep of Spain to secure a spot in the final four, but incredibly they did just that. Heather Watson defeated Nuria Parrizas Diaz 6-0 6-2, then Harriet Dart took care of Paula Badosa in arguably the upset of the tournament. Dart won 6-3 6-4 to keep the semi-finals dream alive, before Alicia Barnett and Olivia Nicholls finished the tie off perfectly with a 7-6 6-2 victory in the doubles.

Great Britain will now play Australia for a spot in the semi-finals, after the Aussies won 3-0 against Belgium. In a remarkable tie, Storm Sanders stepped up for the second consecutive match, winning 6-2 6-2 over the more experienced and higher-ranked Alison Van Uytvanck. Top ranked Ajla Tomljanovic also squeezed out a win over Elise Mertens, with the Belgian having to retire midway through the deciding set and sending Australia into the semis. That result was 4-6 6-4 3-0, but the doubles was more convincing, as Sanders and Samantha Stosur capped off the tie with a 6-4 6-3 win over Ysaline Bonaventure and Kirsten Flipkens.