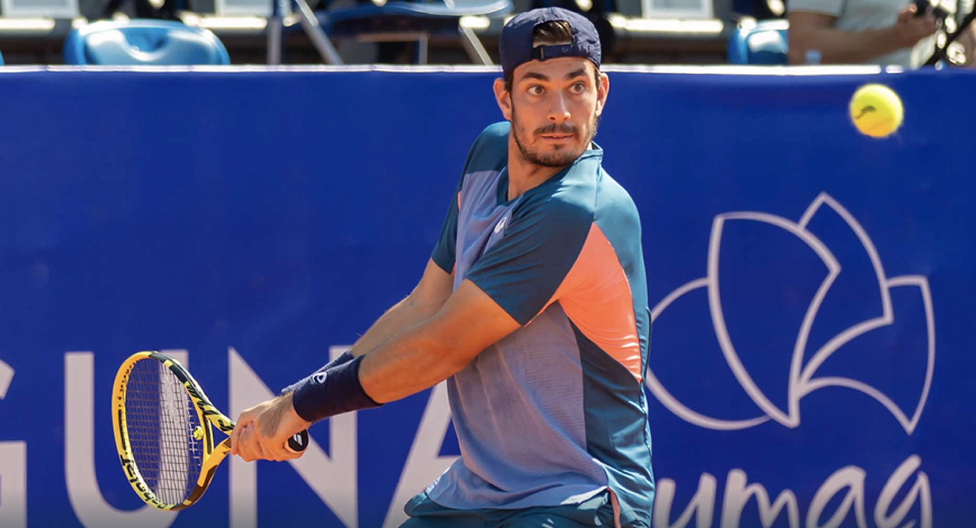 IT has been a long-time coming for 20-year-old Giulio Zeppieri, but the Italian qualifier finally posted his first ever main draw ATP Tour win. The world number 168 has an 0-4 career win-loss record to his name, and after surviving qualifying through the Croatian ATP 250 event in Umag, finally broke through for his maiden victory. Zeppieri won in a come-from-behind Round of 32 victory over Argentinian Pedro Cachin, 3-6 6-1 6-4.

Playing on Goran Ivanisevic Stadium, Zeppieri took an hour and 54 minutes to defeat Cachin, weathering the Argentinian’s serve to get the job done. It was far from smooth sailing for the Italian as Cachin serve 11 aces – and six double faults – to Zeppieri’s five and one respectively, on the clay. Zeppieri was far more consistent though, winning 84 and 50 per cent of his first and second serve points, off a 74 per cent clip. Cachin was difficult to beat off his first serve, but only went at a 55 per cent efficiency. It lead to the Italian breaking three times to one during the match, and setting up five match points before finally claiming his first ATP Tour victory.

“It’s a very emotional moment for me, my first win on the ATP Tour,” Zeppieri said post-match. “I’m very proud of myself because I beat a very good guy in Pedro, and I’m very happy.”

Zeppieri had a very good run at qualifying defeating Gilles Simon and Elias Ymer, and will now take on Colombian Daniel Elahi Galan in the second round after he dispatched seventh seed Italian Fabio Fognini in three sets, 6-3 5-7 6-3. Also winning through to the Round of 16 in Umag were fellow Italian Marco Cecchinato, and Spanish duo Roberto Carballes Baena and Jaume Munar.

Remaining on the ATP Tour clay court circuit, eighth seed Joao Sousa was the sole seed in action at Kitzbuhel, winning against Czech qualifier Vit Kopriva in straight sets. It was a good day for the home nation, with Austrian wildcards Filip Misolic and Jurij Rodionov both winning their matches in straight sets, while Peruvian Juan Pablo Varillas continued his great form with a victory over Spaniard Carlos Taberner. Argentinian knocked off Chilean Cristian Garin 6-4 7-5 in an upset, while Serbian Dusan Lajovic and Czech Jiri Lehecka also won through to the next round.

Returning to the hard courts of the United States ahead of a jam-packed August in the States, eighth seed Brandon Nakashima picked up a three-set win over Australian Jordan Thompson in a thriller. It was not as joyous for fellow Americans Sebastian Korda and Marcos Giron, who were on the receiving end of three-set losses to Japanese qualifier Taro Daniel and Korean Soonwoo Kwon. In the final match of the day, Australian duo John Millman and Alexei Popyrin did battle, with the former coming up trumps 7-6 4-6 6-3.

On the WTA Tour, a couple of seeds fell in Prague with third seed Elise Mertens and sixth seed Alison Van Uytvanck bowing out in very different circumstances. The Belgian duo went down when Van Uytvanck had to retire after seven games to Slovenian qualifier Dalila Jakupovic, while Mertens lost to Poland’s Magda Linette in three sets, 6-3 2-6 6-2. Czech eighth seed Marie Bouzkova advanced through to the second round in her home state, as well as Chinese duo, Qiang Wang and Lin Zhu. Chloe Paquet and Nao Hibino also earned spots in the Round of 16.

Finally in Warsaw, Polish wildcard Maja Chwalinska won through to the second round among the six matches on court. The home nation talent was joined by fifth seed Caroline Garcia, Swiss hope Viktorija Golubic, Brazilian lucky loser Laura Pigossi, Czech Katerina Siniakova and Argentinian Nadia Podoroska in the Round of 16.