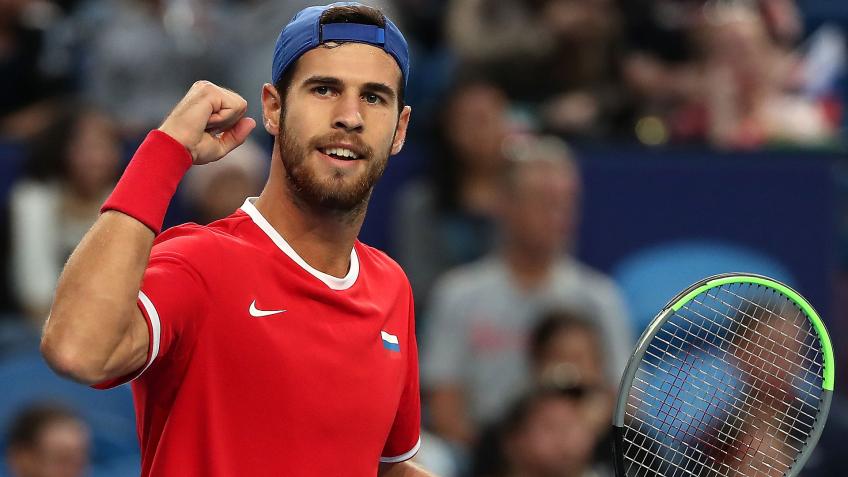 DESPITE a scare from home nation hero Jan-Lennard Struff, Russian seventh seed Karen Khachanov has won through to the second round of the ATP 500 event in Hamburg. As the next week of tournaments kicked off across four tournaments, Khachanov was the sole seeded winner in the men’s singles draw in Hamburg, winning against Struff, 3-6 6-3 7-6.

Khachanov dropped the first set against the former Top 30 player who received a wildcard into the event, as the German did not drop a first serve point and won 18 of his 23 service points, Remarkably, he was still broken with four of those five points coming in the one game. Luckily for Stuff, he broke Khachanov twice, and withstood five aces from the Russian. Despite losing the first set, Khachanov was still looking strong, and it showed in the second set when he won 6-3 thanks to only dropping four points on serve and producing three aces.

At a set apiece, the players went toe-for-toe in the deciding set, with almost identical stats of 67 and 50 per cent first and second serve points won respectively. Both players could only scrape one break off the opposition, but Khachanov stood up in the third set tiebreak, winning 7-2 for the overall 3-6 6-3 7-6 in two hours and 17 minutes to book his spot in the Round of 16. Khachanov will take on the winner of Aljaz Bedene and Fabio Fognini in the next round.

In other result at Hamburg, Spaniard Alejandro Davidovich Fokina knocked off fifth seed Dutchman Botic Van de Zandschulp in straight sets, 6-4 6-4. Slovakian qualifier Jozef Kovalik had to battle past German wildcard Max Hans Rehberg in three sets, while fellow Slovakian Alex Molcan and Italian Lorenzo Musetti both booked their spots in the Round of 16.

In the women’s singles draw at Hamburg, nine matches took place to make inroads into the first round draw. Top seeds Barbora Krejcikova, Aliaksandra Sasnovich and Andrea Petkovic all moved through to the Round of 16 with straight sets wins. All the results largely went to plan, though Argentinian qualifier Maria Carle upset German wildcard Eva Lys who impressed last start.

It was a similar case at Palermo, with the three seeds all advancing through to the Round of 16. Third seed Shuai Zhang, fourth seed Sara Sorribes Tormo and sixth seed Irina-Camelia Begu were able to move through to the next stage, albeit with the latter two needing three sets to get it done. French qualifier Leolia Jeajean had another good victory and joined compatriot Oceane Dodin in the Round of 16, while home nation hope Jasmine Paolini won through to the second round as well.