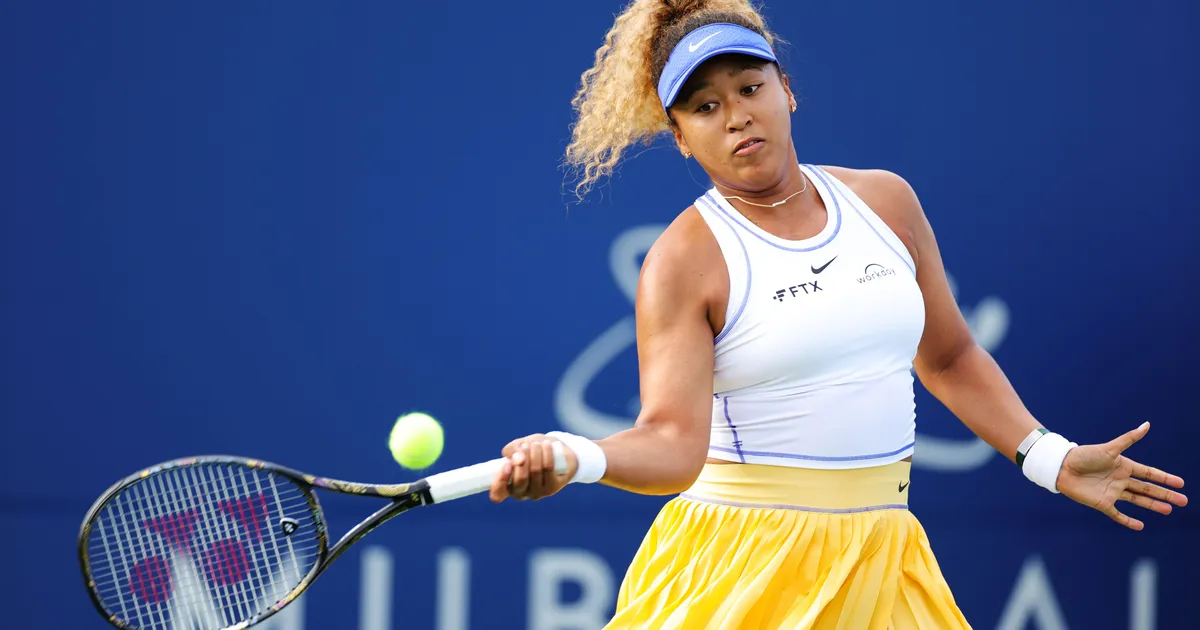 FOUR-time Grand Slam winner Naomi Osaka has returned to the WTA Tour, producing a hard-fought three set win over promising Chinese teenager Qinwen Zheng. The former world number one has not played since her first round loss at Roland Garros, and has not won a match since the Madrid Open on April 30. In a well-earned victory over the dangerous Zheng, Osaka was in full flight – albeit with some serving inconsistencies – to win 6-4 3-6 6-1 in two hours and three minutes.

The Japanese talent served 11 aces for two double faults, and though she only recorded a shaky 48 per cent serving efficiency, was dominant off her first serve points (81 per cent) and able to scrap well off her second serve points (50 per cent). Zheng, known for her serving power was more inconsistent, serving at a 46 per cent clip and totalling seven double faults for just three aces, with Osaka’s consistent power troubling the 19-year-old. The two inconsistent service games lead to plenty of break point opportunities, with Zheng actually bringing up more (8-6), but only converting one, compared to her more experience opponent’s three, including two in the deciding set.

Finishing with 26 winners to Zheng’s 23, as well as only 23 unforced errors to Zheng’s 30, Osaka set up a blockbuster second round match with another teenage star, sixth seed American Coco Gauff. The Roland Garros finalist reached the Round of 16 with a victory over Anhelina Kalinina 6-1 6-0 in a dominant performance. Also joining the pair in the second round were Americans Shelby Rogers and Caroline Dolehide, while ninth seed Russian Veronika Kudermetova reached the Round of 16 with an almost three-hour battle against Italian Camila Giorgi.

In Washington, fourth seed Victoria Azarenka breezed past Ukrainian Dayana Yastremska 6-4 6-0 to reach the Round of 16, as young gun Camila Osorio stamped her second round ticket with a big win over Grand Slam winner Sofia Kenin. Tereza Martincova came back from a bagel first set to defeat China’s Xinyu Wang 0-6 6-4 6-4, while it was better news for Xiyu Wang who flew the flag for China as a lucky loser against Tatjana Maria. Second seed Emma Raducanu and Australian Ajla Tomljanovic were among the other winners on the day, with Russian Anna Kalinskaya and German Andrea Petkovic both reaching the next stage of the tournament.

At the ATP 500 event in Washington, the first of the seeded players took to the court after a first round bye, with Russian duo Andrey Rublev and Karen Khachanov reaching the Round of 16, as did Dutchman Botic Van de Zandschulp and Brit Daniel Evans. In the first round matches, it was a mixed bag for the home side with six Americans featuring in six individual matches, and coming away with the 3-3 win-loss record. Christopher Eubanks, Sebastian Korda and Jack Sock all won through to the Round of 32, while it was not as fortunate for Marcos Giron, Jenson Brooksby and Mackenzie McDonald, who lost to Nick Kyrgios, Yoshito Nishioka and Emil Ruusuvuori respectively.

At the lower graded ATP 250 event in Los Cabos, Australian Jason Kubler continued his fantastic 2022 form with a three-set win over Argentinian eighth seed Tomas Etcheverry. Mexican wildcard Alex Hernandez reached the second round with a hard-fought three-set victory, while Steve Johnson, Radu Albot and Facundo Bagnis were the other winners on day two of the tournament.