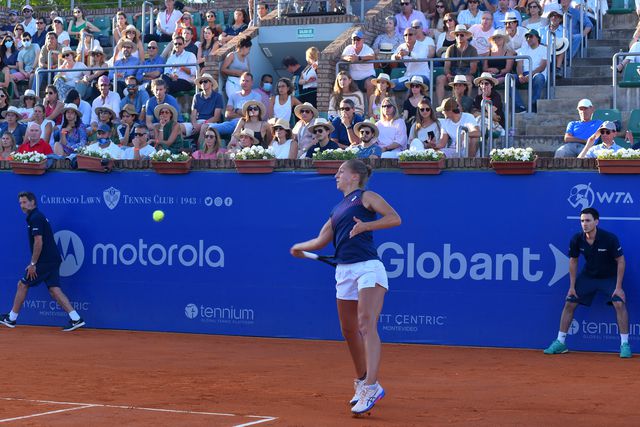 FRENCHWOMAN Diane Parry has claimed the WTA 125 Montevideo Open title in Uruguay overnight, defeating the higher ranked Panna Udvardy in an intriguing final clash of the maiden event. 19-year-old Parry has reached a career-high world number 115 with the title victory, while her Hungarian opponent is also on the verge of entering Top 100 calculations – rising eight ranks to sit 107th in the world. Most remarkably, Parry’s victory is the first title won by a French competitor on the WTA Tour in 2021.

A clay court specialist, Parry was in her element against her third seeded opposition throughout the 6-3 6-2 contest. Requiring just 76 minutes to claim the comprehensive victory, Parry impressed on serve winning 72.4 per cent of points off a 55.8 per cent clip. She also hit four aces to Udvardy’s three, and while she also made more double faults (5-3) she was quick to recover with an improved return rate winning 50 per cent of return points. Parry was also more clean off her second serve, utilising it well to win 56.5 per cent of points (13 of 23) compared to Udvardy’s 34.6 per cent (just nine from 26) and also saved three of four break points. She also broke Udvardy five times with the latter saving just twice.

Parry’s run to the title was fairly straightforward, fortunate to only face two seeds with both coming in the semi (sixth seed Ekaterine Gorgodze) and final (third seed Udvardy). She did not face a third set in any of her clashes, and even more remarkably, did not lose more than five games total in any of her five matches. Overall, it was a comprehensive week from the talented French teen, who will look to continue her form as the season comes to a close in France over the next few weeks.

This title victory follows a string of strong performances from Parry, who has been edging closer to WTA Tour standings in recent months and has spent a significant amount of time this year on the ITF Tour with three clay titles to her name. It backs up an Argentina Open final berth just two weeks ago, where she also defeated Udvardy in a much closer semi-final, with plenty to grow on as she looks to trend up on the WTA Tour and participate in stronger events.