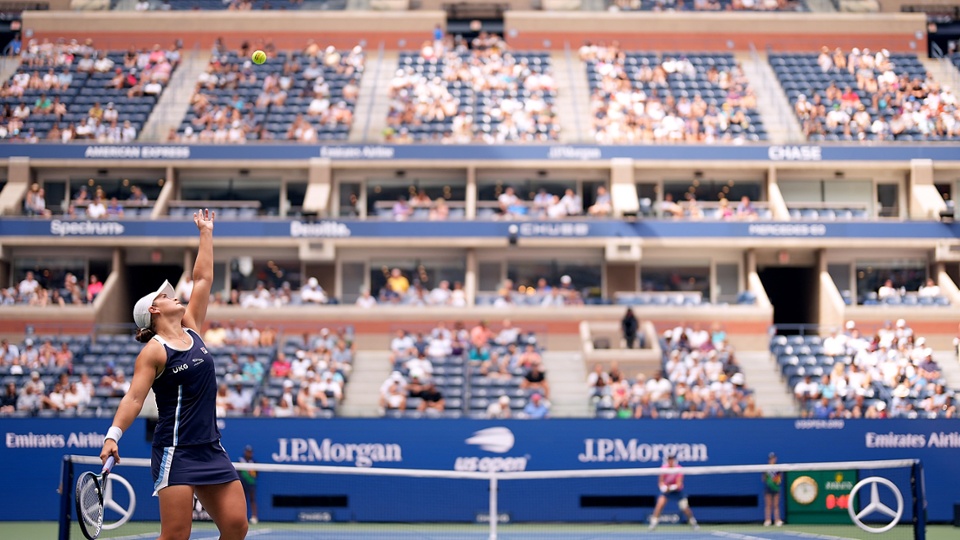 THE US Open women’s draw has already seen plenty of intriguing results shake up the competition, but once more it was the seeds that stepped up to the pressure with just two more joining Yulia Putintseva on the sidelines following the first round.

The likes of Ash Barty, Karolina Pliskova, Iga Swiatek and Petra Kvitova had little issue getting over their first round opposition, with all four seeds proceeding in straight sets. Despite her number one seeding handing her a relatively low risk start to the event, Barty did not have it easy against former Russian finalist, Vera Zvonareva. The Australian sped through the first set but had to adjust in the second, eventually claiming the 6-1 7-6(7) result in just under 90 minutes.

“Obviously a tough one against Vera straight up,” Barty said. “She’s an experienced campaigner. She knows how to get herself into matches. I think all in all, adapting to conditions was a little bit slower than I probably would have liked [but] we’re through. We have another chance to improve on that in the next round.”

“I think when my back was against the wall late in that buster, I came up with some really good stuff,” Barty added. “That’s all we can ask is when your back is against the wall, you trust yourself, you go out there and pick your spots and hit them.”

Kvitova was just about unstoppable, flying through her 6-1 6-2 encounter with Polona Hercog in 61 minutes off the back of an 81 per cent win rate off her first serve. Compatriot Pliskova and Polish talent Swiatek both overcame American competitors in respective 6-3 6-4 results. Sixth seed Bianca Andreescu had a tougher time against Switzerland’s Viktorija Golubic, who did not relent throughout the entire 7-5 4-6 7-5 contest. A 73 per cent win rate off a 66 per cent clip did the trick though, as the Canadian fired off 40 winners and 36 unforced errors with plenty to improve on now she has that first match out of the way.

“I definitely haven’t had a lot of matches in but I feel very comfortable playing on this court,” Andreescu said post-match. “I’m able to go back to the feelings that I had in 2019 and that confidence a little bit more than other tournaments, maybe it’s the court, the tournament, all of that.

“I channeled a lot in the match and honestly, it was super, super close. It really came down to a couple of points. I just fought the hardest, honestly. It could have gone both ways.”

“She was playing incredible tennis,” Andreescu said. “She was getting to many balls, she was really putting the ball in the court, it was incredible. For me I just really wanted to step up my game and try to be better than that, kind of play her at her own game – not so much with rhythm, but with power – and I think that really helped.”

While Andreescu had to fight hard for her three set victory, she was the only seed to claim a win in three sets on the day with the remaining seeded competitors all proceeding in two. Seeds 11, 14 and 17 in Belinda Bencic, Anastasia Pavlyuchenkova and Maria Sakkari found themselves relatively unscathed, while moving into the 20’s it was Jessica Pegula (23rd seed), Paula Badosa (24th) and Anett Kontaveit (28th) who found their winning form. 30th seed Petra Martic was the remaining seeded winner on the day, disposing of Hungarian Dalma Galfi 6-3 6-2.

It was a different story for 22nd seed Karolina Muchova and 29th seed Veronika Kudermetova though, with Kudermetova falling in three to Romanian Sorana Cirstea, marginally losing the first set tiebreaker before latching onto that momentum to steal the second set away from Cirstea. But the Romanian stepped up from there on out, firing on all cylinders in the last to claim the 7-6(5) 3-6 6-0 victory. Meanwhile, Muchova was the only Czech to not make it through the day with a 6-2 7-6(3) loss to Sara Sorribes Tormo. The Spaniard may not have retained control throughout the entire clash, but was much more comfortable with just 14 unforced errors to Muchova’s 48. Kristyna Pliskova joined twin sister Karolina in the second round alongside Kvitova and Katerina Siniakova.

Straight set victories were the theme of the day, with just four more three-set victors in Greet Minnen, Varvara Gracheva, Anna Schmiedlova and Lauren Davis joining Andreescu and Cirstea on the three set winners list. Amanda Anisimova and Shelby Rogers joined Pegula and Davis on the day’s American winners list, with Rogers disposing of compatriot Madison Brengle, and the likes of Hailey Baptiste, Coco Vandeweghe, Ann Li and Katie Volynets all missing out on a place in the Round of 64.

It was a battle between shared names and former junior number one ranking as 20-year-old Dane Clara Tauson overcame 18-year-old French talent Clara Burel, while 18-year-old Brit Emma Raducanu only required 78 minutes to dispose of Stefanie Voegele, 6-2 6-3. Raducanu is looking to press her case at her second grand slam, making her way through qualifiers to earn this Round of 64 position. Voegele’s compatriot Jil Teichmann continued her solid form to earn a second round berth while it was the opposite for Brit Katie Boulter who fell to Russian Liudmila Samsonova. The last two matches both featured Japanese talents, with Misaki Doi joining Naomi Osaka in the second round following a solid victory over Australian Storm Sanders, while Frenchwoman Fiona Ferro overcame Nao Hibino 6-1 6-4.