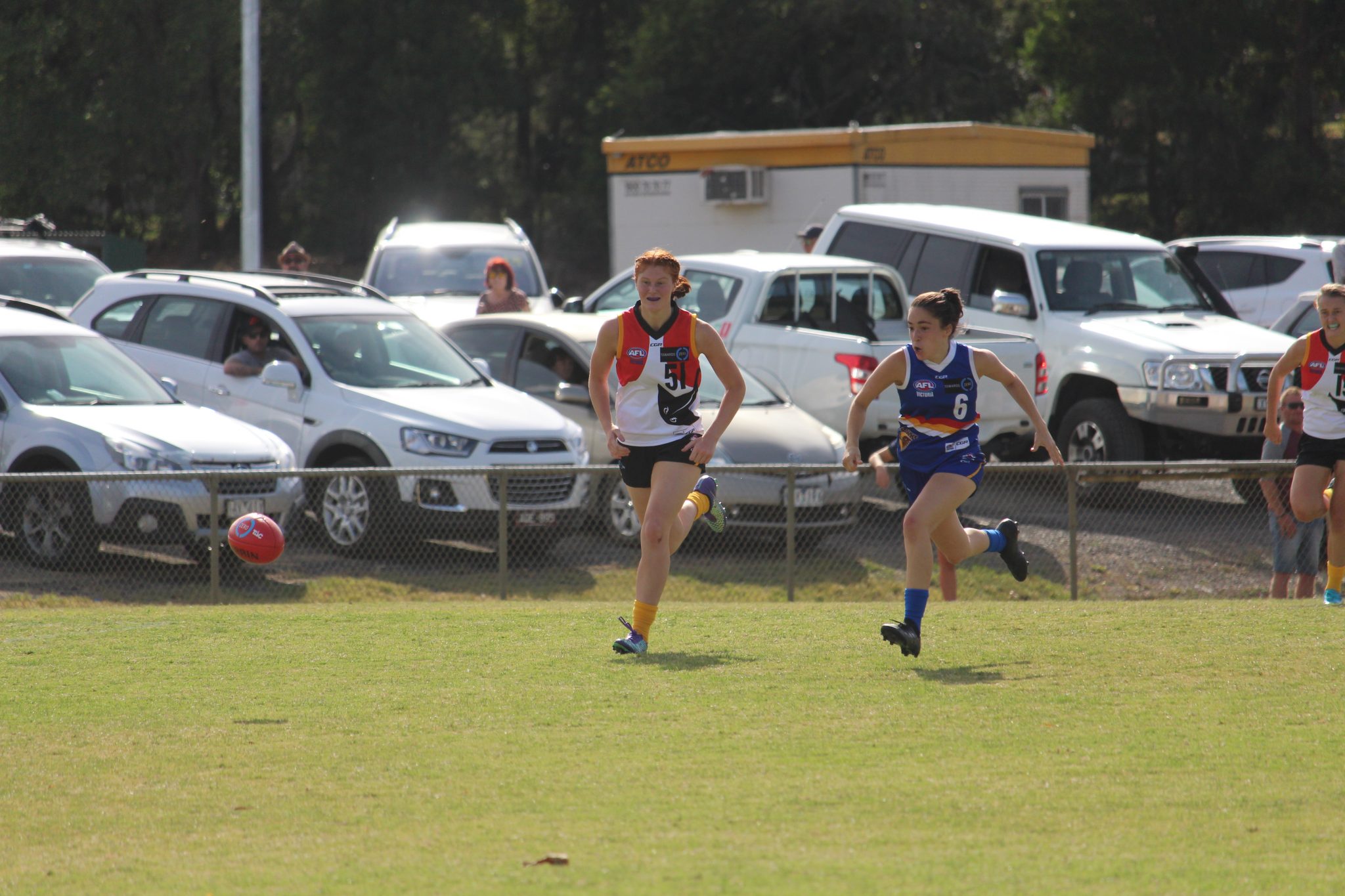 ROUND 3 of the NAB League Under 18 Girls competition has arrived, and with it comes another weekend of intense footy across the board. In such a short season every win matters, so every game is on the line once again as teams settle into their lists and leaders emerge.

Sandringham is in for another tough week as they take on the Calder Cannons, who are sitting in second on the ladder after two convincing wins in as many weeks. Calder will look to star bottom-ager, Georgie Prespakis again this week, after she picked up 22 disposals and kicked seven goals last week against Greater Western Victoria (GWV) Rebels. Sandringham’s Alice Burke had a solid game through the midfield in Round 2, racking up 20 disposals and 11 tackles in the Dragons’ loss to Dandenong, making her the perfect candidate to lead the charge against the Cannons’ dominant midfield. Burke was matched by fellow mid, Eliza McNamara in her disposal tally, winning plenty of contested ball and creating clearances, while Marguerite Purcell along the wing proved her effectiveness in the first half last round, before a quieter second half lowered her influence on the match. The trio will have to watch out for Cannons midfielder, Georgia Patrikios (21 disposals, seven inside 50s), who who performed well as she returned to the side last week, while Gloria Elarmaly (nine tackles, 14 disposals) and Alana Barba (six tackles, two rebounds) both showed some good signs through the midfield and will certainly make it difficult for the Dragons to penetrate the forward 50.

Round 3 will see a battle for control of the middle of the ladder as both GWV Rebels and Dandenong come into this match sitting on a win and a loss apiece. Only percentage separates the sides, so it will be a big match to determine ladder positions in such a short season. Sophie Molan worked tirelessly through the middle, racking up 24 touches for her efforts extracting the ball to create clearances, while Ella Wood was impressive throughout against the Cannons. Dandenong showed the depth of their forward line last round, with five individual goalkickers making their mark on the match, while defender, Zoe Hill will be key down back to reduce the impact of the Rebels up forward. Isabella Shannon was a tackling machine through the midfield, racking up 12 tackles to go with her team high 18 disposals. Reducing the wealth of the Stingrays’ goalkicking options will be key for the Rebels’ success, while the midfield battle is sure to be one to watch.

Last year’s grand finalists, Northern will come into Round 3 off the back of a draw to Oakleigh, so are sure to be raring to go against their Western counterparts, likely to pull out all the stops against the Jets, who are sitting winless in tenth. The Knights will hope for big games again from Ellie McKenzie and Alyssa Bannan, who had mirrored efforts in Round 2 with five inside 50s and kicked two goals apiece, while a shared tackling effort around the ground saw Jess Fitzgerald rack up nine, with six other Knights picking up five or more tackles each. With strengths across the field, Northern will be hard to stop once they get going, and have the ability to run over their opposition. Despite difficulty taking advantage of opportunities in the forward 50 last round against Murray, the Jets had some standout players in Elisabeth Georgostathis (28 disposals, seven rebound 50s) and Isabella Grant (19 disposals, six marks), both players who have the ability to run amok if given the opportunity.

Sunday’s opening match will be a lower ladder brawl, seeing ninth placed Murray Bushrangers host bottom of the ladder, Gippsland Power. Murray had three players hit 20 disposals in Round 2, with Abby Favell the main culprit with 21 disposals and five marks. Zali Spencer and Millie Brown were also pivotal through the midfield, while Sophie Locke and Mikaela Trethowan dominated the tackles with eight apiece. Gippsland will need to outplay the Bushrangers’ midfield to ensure a second win on the trot, a role that will see players the likes of Nikia Webber and Chandra Abrahams put to the task. Webber racked up eight tackles and 15 disposals last round while Abrahams had a quieter match compared to her impressive Round 1 performance, but the pair are likely to put forward a strong performance against a relatively even midfield counterpart in the Bushrangers.

The Eastern Ranges will host Oakleigh Chargers at midday in a match that will see ball magnets combine for an intense and relentless pressure filled contest. Eastern endured a loss in a low scoring affair against the Bendigo Pioneers last round while Oakleigh suffered a draw against Northern, so both sides will be raring for a hard and tough contest to get the four points. Tess Flintoff flexed her muscles last round, dominating the midfield with 23 touches, 11 marks and nine inside 50s, however didn’t have many opportunities or options forward to capitalise on her efforts. Tarni Brown paired well, laying a game-high eight tackles to go with her 17 disposals and four inside 50s. Flintoff and Brown will want to back up their strong performance against the Chargers, but the strength of Oakleigh’s composure with the footy is likely to get them over the line this week. Mimi Hill’s ability to clear the ball out from stoppages on her way to 17 disposals was key in last week’s match against Northern, while Amelia Van Oosterwijck’s ability to layer intensity and pressure on ball movers allowed her to notch up 10 tackles, topping her nine touches. Meanwhile, Emily Harley will want to keep her successful start to the season going, with seven goals over the first two rounds proving her strength in front of goal, meaning Eastern will have to ensure their defence is top notch.

Geelong is back in top spot this week after a convincing Round 2 win over Eastern, settling back comfortably into where they sat for majority of season 2018. Lucy McEvoy’s fine 2018 form has continued into this season, racking up 26 disposals, six marks, six tackles and a goal, while Darcy Moloney and Paige Sheppard combined for 41 disposals and 14 inside 50s. The Falcons’ ball movers are backed up by two players who kicked a bag of goals apiece, the likes of Mia Skinner (three goals and eight tackles) and Renee Tierney (four goals, 15 disposals), while four other individual goalkickers last round just goes to show the extent of Geelong’s strength forward. A team effort across the board got the Pioneers the four points last week, with a smattering of players contributing through the midfield to create opportunities forward. Brooke Hards (17 disposals, five tackers) and key defender, Tara Slender (16 disposals, seven rebounds) combined well, with Slender currently top of the leaderboard for rebounds and likely to line-up on Geelong’s Skinner to try and reduce her impact forward. Fellow defender, Kate Douglass is likely to line up against Tierney. Bendigo will need to be at its best, but have shown some terrific competitiveness and will look to match the benchmark in the competition.