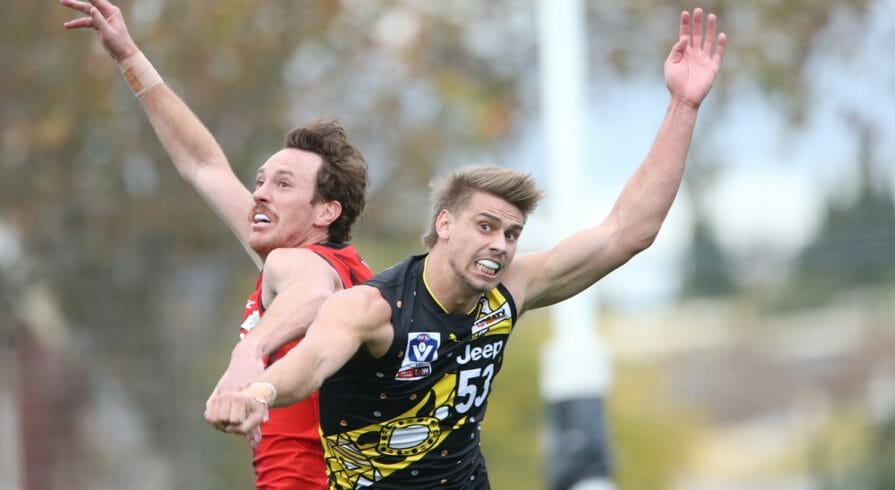 RICHMOND cemented their place at the top of the Victorian Football League (VFL) ladder following a three-point victory over the Bombers in Round 8, while Collingwood returned to the winners list for the first time since Round 1.

The Magpies overturned a one-point deficit at three-quarter-time to storm home to their second win of the season. In a tight match, Box Hill held the largest margin of three goals midway through the third term. With Collingwood’s senior list decimated due to injury, it was largely the VFL stars who turned the tide and lead the black and white to the win. Former Blue Andrew Gallucci, Sam Glover and Callan Wellings all kicked two goals each when the match was there to be won, while Lachie Howe stood out in the ruck with 38 hitouts, a goal, and 20 disposals. Josh Daicos had 34 disposals for the Pies, pushing his case for a senior recall. Box Hill’s Jackson Ross sits equal top of the Frosty Miller Medal standings after another four-goal display.

Geelong smashed Coburg at home to the tune of 77 points. The Cats lead all day but it was the second quarter where the majority of the damage was done, with Geelong booting seven goals to one. Coburg’s task wasn’t made any easier with an injury to small forward Sam Lowson, who still managed to kick two goals. It was a day to remember for Nathan Krueger as he slammed home six majors while Blake Schlensog, Jake Tarca, and Jackson McLachlan all contributed three each. The latter also had 25 disposals in an impressive display, with Cats VFL coach Shane O’Bree comparing him to Tom Atkins.

The match of the round took place as a curtain raiser to Dreamtime at the ‘G just 200m across Yarra Park at Punt Rd. Richmond led all day but almost fell over at the final hurdle as the Bombers mounted a last-quarter comeback, booting four goals to one. The Tigers managed to hold on however to remain the only undefeated side in the competition. Mabior Chol dominated with 22 touches, a goal and 22 hitouts, as Jack Graham and Jake Aarts each kicked two goals. Essendon’s Dylan Clarke had the most disposals on the ground with 26 while Irving Mosquito and Mark Baguley also had two goals each to their name.

The Bulldogs got the job done under the lights at the Whitten Oval on Saturday night. North started fast, high on confidence from their win prior to the bye, before the Dogs reeled them back in and did not let the lead go, eventually running out victors by 19 points. Aaron Hall racked up 28 disposals for the Kangaroos while former VFL Premiership Bulldog Tom Campbell had 22 touches and 52 hitouts against his old side. Lukas Webb had 24 disposals and Tory Dickson kicked three goals for the Dogs. The win moves Footscray to outright second on the VFL ladder.

It was a tale of two halves at Marvel Stadium and the Zebras picked up their game in the second act to win by 11 points. The Blues led by 16 points at the main break before Sandy kicked 6 goals and left their opponents goalless in the third term to turn the game on its head. Brede Seccull had 30 disposals while David Armitage and Hunter Clark had 29 for Sandringham. Sam Fisher was best afield for the Blues with 26. Patrick Kerr and Sam Fox each kicked three goals for their respective sides.

Casey held the Seagulls scoreless in the first quarter but still couldn’t come home with the four points, as Williamstown ran over the top of the Demons at home. Willy kicked eight goals in the second half to Casey’s three, all of which were kicked in the last three minutes of the game, to record a 16-point victory. Mitchell Hibberd continued his fine form with 31 disposals while Jay Kennedy-Harris had 26 disposals and kicked a goal. Sam Weideman impressed for the Demons with three goals but Jordan Lewis doesn’t look like gaining a senior recall anytime soon, collecting only 23 touches. Christian Buykx-Smith and Jaylon Thorpe kicked three goals each for the Seagulls.

There is a feeling that the Dolphins are getting closer to a win despite going down by 29 points at home to Werribee on Sunday. Frankston held the Tigers goalless in the first term and led for most of the match, including at three-quarter time, before Werribee rolled over the top to pick up their fourth win of 2019. The Tigers slammed home four goals and eight behinds in the final term, holding the Dolphins scoreless to win by 29 points. Jake Riccardi kicked three goals for the away side, while Beau Bailey kicked 2 for Frankston. Tom Gribble collected 32 disposals and kicked two goals as teammate Matt Hanson collected 31. James Rendell impressed for Frankston with 30 hitouts.