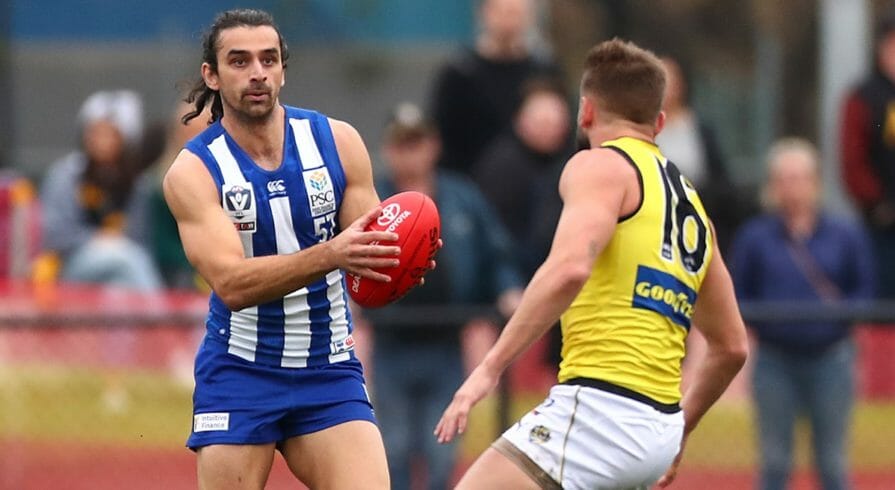 NORTH MELBOURNE caused the biggest boilover of the Victorian Football League (VFL) season, handing top-of-the-table Richmond their first defeat in Round 9, while the Whitten Oval played host to an unbelievably low-scoring affair between Footscray and Geelong.

The Hawks recorded a victory at home against Williamstown after leading much of the game. Box Hill only sacrificed the lead towards half time, where they trailed by three points, but quickly took charge once again when the third term commenced to eventually run away 20-point winners. Luke Meadows had 27 disposals while Jake Greiser had the most for the away side with 23 and 1 goal. Jaylon Thorpe kicked three goals from five kicks.

Werribee were comfortable victors over Casey at Avalon Airport Oval on Saturday. The Tigers controlled the contest from the first bounce with their lead never really under threat. Michael Barlow’s good form continued with 33 disposals and a goal as teammate Josh Clayton also managed 30 disposals and a major. Corey Wagner had the most for Casey with 25 disposals and 10 tackles. Max Augerinos kicked 3 goals for the Tigers.

In the upset of the season so far, North Melbourne returned to Arden Street Oval in style with a win over the current table-toppers Richmond. North had the lead at every break and finished strongly, kicking six goals to three in the final term. Taylor Garner, new recruit Lachlan Hosie, and Curtis Taylor all kicked three goals each for the home side while Patrick Naish continued his push for a senior call-up with 25 disposals and three goals. Paul Ahern recorded 27 disposals for the victors.

A five goal to none last term paved the way for a big Bombers win over the Northern Blues at Windy Hill. Essendon only held a 10-point lead at the final break, but the second-placed side turned on the jets to eventually win by 41 points. Dale Thomas made partial amends for his demotion with 32 disposals while Sam Fisher also impressed, notching up 26 touches. David Myers kicked two goals and also had 26 disposals. Brayden Ham converted three majors for the Bombers.

The Zebras won away from home against Coburg to remain in the top eight. Sandringham led for most of the match, bar a period in the third term, but never by a comfortable margin, and the Tigers continued to push them all the way until the final siren. St Kilda fans will be excited by Max King, who kicked three goals while Mitch Podhajski kicked 2 and could’ve had a few more, as he slotted 5 behinds. Marcus Lentini had 29 disposals as Adam Swierzbiolek recorded 52 hitouts.

A truly bizzare game at the Whitten Oval resulted in a one-point win to Geelong. The biggest lead of the game was 18 points the way of the Bulldogs in the second quarter, and they lead by a goal at the main break. Ultimately, it was Footscray’s inaccuracy in front of goal that cost them the victory. Wylie Buzza was the only multiple goalscorer with 2 goals while Rhylee West had 22 disposals. Zach Guthrie notched up 21 for the Cats.

A disappointing Collingwood outfit collapsed in the final term, going scoreless as Port Melbourne romped to victory. The Magpies started strongly and despite resting the returning Matt Scharenberg from half time, led by 12 points at the final break. From then on it was all the Borough as they slammed on 8 goals to record a 42-point win. Brayden Sier starred with 34 disposals and a goal while Eli Templeton racked up 30 touches for Port. Jordan Lisle kicked 4 goals while at the opposite end, Andrew Gallucci kicked 3.