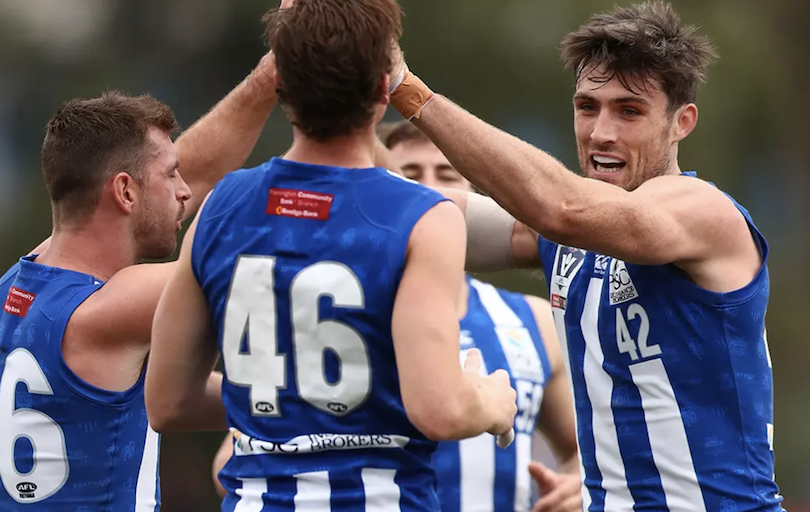 COLLINGWOOD suffered another heavy loss in Round 10 of the Victorian Football League (VFL) falling to Casey, while Williamstown took advantage of the bye for Essendon and moved to second place on the ladder.

The Tigers returned to the winners list with a 23-point victory over the Cats at Punt Rd. Eager to prove last week was merely an anomaly, Richmond took the lead nearing quarter time and didn’t let go of it. Geelong only trailed by five points at the final break but couldn’t make up the difference in the last quarter, with Richmond finishing strong. Luke Nelson kicked four goals for the Tigers while Nathan Kreuger slotted three for Geelong. Charlie Constable and Fraser Turner each kicked a goal and had 26 disposals while Shai Bolton finished with 25 touches. Richmond face Coburg this weekend while Geelong have the bye.

North Melbourne couldn’t continue the form from their win over the Tigers as they were trounced by the Seagulls away from home. It was Williamstown’s eight goal to four second term that set the tone, and they eventually went on to win by 53 points. Nick Rodda booted four goals while Joel Ottavi snagged three and new Roo Lachie Hosie kicked two for his side. Mitch Hibberd was best afield with 29 disposals and two goals. Williamstown take on Port Melbourne in the classic rivalry this Sunday while North Melbourne travel to Frankston.

A spirited fightback from the Lions was not enough to take home the four points against the Norther Blues. Wearing the traditional Preston red and white, the Blues had a lead as big as 52 points in the final term before Coburg put some good footy together to narrow it to just 17 by the final siren. The two sides were separated by just four points at the main break before the Blues switched on and kicked four goals to one in the third term. Marcus Lentini had a mammoth 42 disposals for the Lions, with Carlton’s Matthew Kennedy the next best on 30. Hedley Smith kicked five goals on debut while Andrew Phillips slotted three. The Blues return to Ikon Park to play Footscray on Saturday while Coburg take on Richmond in Beaconsfield.

It was another long Sunday for Frankston supporters as their side fell to Port Melbourne by 73 points. Again, it was a tale of two halves for the Dolphins, as they enjoyed an impressive second term, even taking the lead at one stage. From then on they seemed to fall off a cliff as the Borough romped home, restricting Frankston to just one second half goal. Tom O’Sullivan and Ethan Phillips each kicked three goals. Josh Newman, Nathan Freeman and Will Fordham kept Frankston afloat with 32, 31, and 29 disposals respectively while Eli Templeton had 31 touches for Port. Frankston take on North Melbourne at home while Port host Williamstown this weekend.

Matthew Scharenberg getting through the match uninjured was one of the few highlights for Collingwood as they never looked in the contest at Casey Fields. The Demons lead comfortably at every break, eventually winning by 63 points. Alex Woodward collected his usual 32 disposals while Jordan Lewis had 30 touches as he attempts to force his way back into the Melbourne lineup. Kyle Dunkley and Mitch White each kicked three goals for the home side. Both sides have the bye this weekend.