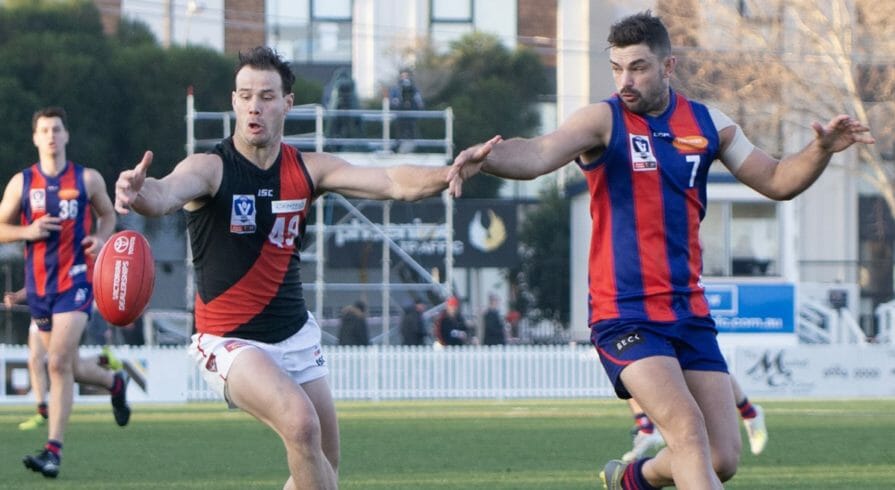 ESSENDON defeated Port Melbourne by 69 points to move into second place on the Victorian Football League (VFL) ladder, closing the gap on Richmond, while reigning premiers Box Hill returned to the winners list with a big win over Sandringham.

The Cats brought Frankston back down to earth after their first win of the season last week with a thumping 89-point win. Geelong set the tone early, kicking eight goals to two in the opening term and never allowing the Dolphins free use of the footy. Wylie Buzza, Jamaine Jones and Aaron Black kicked 3 goals each for the home side while Alex Harnett slotted 2 for Frankston. Charlie Constable and Nathan Freeman split most disposals with 33 each as Scott Selwood collected 32. Geelong take on the Northern Blues at Ikon Park this week while Frankston host Coburg.

Box Hill are back in the top eight following a 37-point win over Sandringham. The Zebras held the lead early in the first term before the former Mustangs kicked in the second quarter and eased to victory. James Cousins had 30 disposals for the Hawks and Darragh Joyce with 21 for Sandy, while Oliver Hanrahan kicked four goals. Box Hill travel to Casey Fields to take on the Demons as Sandringham host top-of-the-table Richmond this Saturday.

Collingwood recorded just their third win of the season with a come-from-behind 23-point victory at the Whitten Oval. The momentum swings in the match were obvious, with the Bulldogs holding a one-point lead at the final break. The Magpies then kicked away with a five goals to one final term ensuring they picked up the four points. Andrew Gallucci slotted three goals for the away side as Alex Woodward collected 38 disposals. Former number 6 draft pick Matthew Scharenberg pushed his case for an AFL call-up with 33 touches. Collingwood host North Melbourne at Victoria Park on Saturday while Footscray face Port Melbourne away.

A week of upheaval at Casey has ended positively, with a 15-point win over Coburg. New coach Sam Radford engineered a victory, although the Demons might feel they should’ve won by a lot more. Coburg had a two-point lead at quarter-time before Casey took charge, holding the home side scoreless while kicking 4 goals of their own. From then on the two sides traded goals, with the margin remaining between 20-30 points right up until the trend was broken and Coburg kicked the final goal of the match. Jordan Lewis dominated with 39 disposals while Marcus Lentini continued his good form with 37. Steven Stroobants and Peter McEvoy kicked three goals each while Casey had all individual goalkickers. The Demons host Box Hill on Saturday while Coburg travel to Frankston on Sunday.

The Tigers almost came from behind to steal victory from the Seagulls at Avalon Airport Oval. Williamstown dominated the game from the first bounce with a lead as large as 37 points midway through the third term, but allowed Werribee to creep back into the contest in the final term, only for the Tigers to fall short by eight points after coming within two points. Matthew Munro booted five goals for the Tigers while Michael Barlow had another 37 disposals and one-goal game. Mitchell Hibberd was best for the away side with 29 touches. Werribee take on Essendon at home on Sunday while Williamstown have the bye.

A huge third-quarter cemented the Bombers as one of the teams to beat in the VFL this season as they easily overcame a highly-fancied Port Melbourne at North Port Oval. Essendon booted eight goals to three in that third term and eventually ran away 69-point victors. Will Snelling was best afield for the Dons with three goals and 28 disposals while Port’s Shannen Lange kicked two and had 34 touches. Aaron Francis booted four goals for the Bombers. Essendon face Werribee this Sunday while Port take on Footscray on Saturday.