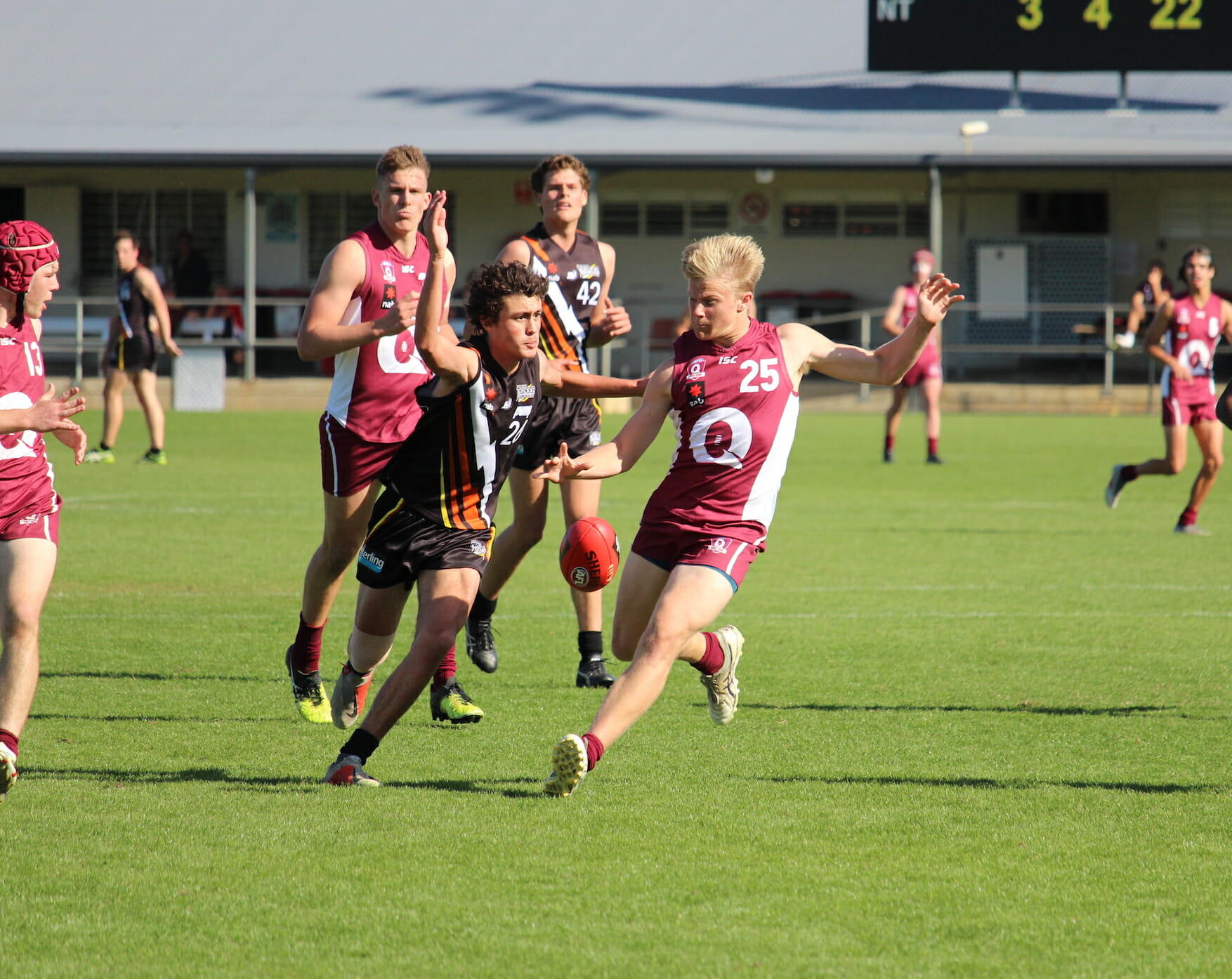 NEW South Wales/Australian Capital Territory (NSW/ACT) replicated Vic Metro’s Division 1 run, going through undefeated over three rounds to claim the Division 2 title. Queensland picked up two wins on home turf to slot into second place, with one of those coming over third-place Tasmania, while Northern Territory was the only side to go through without a win despite showing promise. We recap how each side fared and shed light on some of the better performers throughout the competition.

Despite not picking up a win over their three games, there were plenty of highlights and standouts for NT in this year’s carnival. A 53-point loss against Tasmania kicked off the Thunder’s campaign, with leading goal kicker Mark White enjoying his best game for the carnival to boot an equal game-high four goals. He was the Thunder’s only multiple goal kicker on the day, with Antonio James amongst the best in an under-siege defence and eventual MVP Brodie Lake enjoying a solid start. The NT responded in fine fashion against title-holders NSW/ACT in Round 2, pushing the Rams all the way but going down by 17 points. Two goalless terms told the tale of the see-sawing contest, and it was Lake again who impressed with his 26 disposals, seven marks, eight clearances and two goals. Tyrell Lui was also influential from midfield with 18 disposals, nine clearances and a goal, while undersized ruck Ned Stevens battled hard to have 12 disposals, 25 hitouts and a goal. It was a much improved performance from the Thunder, with a tough game against the hosts to come. It proved just that as they went down by 52 points in Aspley, struggling to match up on the Maroon’s array of tall forward options. At ground level, James again accumulated from defence and Ariki Lowe was busy in midfield with 15 disposals, six clearances and seven inside 50s. On the outside, Preyben Tipiloura showed some flash with his two goals, while Jason Baird stood up in a shift to defence with 12 disposals and five rebounds. It was a tough initiation onto the national stage for these NT youngsters, but there is certainly some talent to burn amongst the group.

Division 2 title winners NSW/ACT responded beautifully to every question raised by their three opponents, holding firm in their first two games and enjoying a more comfortable win in the last. Round 1 saw them matched up against traditional rivals Queensland, overcoming deficits at quarter and three-quarter time to run over the top of the Maroons with a wind advantage. Austin Ball and Euriah Hollard each kicked two goals with Ball named best for the Rams, while the tall duo of Will Edwards and Patrick Voss also impressed. NT provided a good test for the Rams in Round 2, NSW/ACT’s ability to keep the Thunder goalless in two of the four quarters proved the difference. Voss booted four goals, while zippy ball winner Will Sexton was instrumental with 19 disposals, six marks, five tackles and a goal. His disposal effort was matched by rebounding defender Felix Rogers (eight rebounds) and tall forward Sam Stening (five marks, seven inside 50s, 1.5) as the Rams sailed home strongly. After being tested for three quarters against NT, the Rams stormed out of the blocks against Tasmania in Round 3 with an eight-goal to nil first half. The scoring slowed after the main break and Tasmania managed to put together 14 scoring shots, but the Rams were simply too efficient from forward 50 stoppages and resolute in defence. Joshua Fahey led the disposal count with 24 and 10 rebounds with Matthew McKenzie the only other to break the 20-mark (23 disposals, six marks, nine inside 50s). MVP Kai Watts started well up forward with 13 touches and 1.3, while Stening straightened up for 3.0 from 14 disposals and Toby Alker was again solid in midfield. The strength, versatility, and penetration of NSW/ACT’s midfield movers saw them home in each game, with a team balance also making them the clear-best in Division 2.

Round 2 and 3 hosts Queensland went unbeaten at home to finish the carnival with a positive record and in second place. Their only loss came in Round 1 to champions NSW/ACT, going down by 11 points despite holding leads at two of the four intervals. Competition leading goal kicker Noah McFadyen was the only Maroon to find multiple majors with four, while ball-winners Bodhi Uwland, MVP Austin Harris and Finn Brown were also all influential. The Maroons bounced back in Round 2 in a game they hardly looked like losing against Tasmania at Metricon Stadium, getting up by 20 points in the end. Harris was again terrific with 19 disposals, seven marks and three clearances, while diminutive and tough midfielder Daniel Lanthois worked hard for 18 touches, 11 tackles and seven clearances. The tall trio of Will Bella (three goals) Jye Lockett (two), and McFadyen (two) all found multiples and caused headaches in the air, with that factor inevitably becoming a theme. The three went on to have a big say in Queensland’s closing win over the NT, with McFadyen’s strength close to goal overwhelming the NT defence as he helped himself to 8.2 from 14 disposals and seven marks. Lockett also parked inside attacking 50 to boot another two goals, while Lochlan Harrop also claimed two majors from 20 disposals. In a familiar tale, Harris and Lanthois again led the disposal count with 23 and 20 respectively to round out outstanding individual carnivals. A good combination of speed and ball winning ability further afield made the straightforward game-plan of feeding the talls up forward very effective, and it made them hard to stop in front of their vocal home fans.

A big opening round win over Northern Territory ended up being Tasmania’s only victory for the carnival, unable to get that same scoring flow going in scores of 37 and 34 across the next two games. Their start unearthed plenty of promise though, with nine individual goal kickers contributing to the 53-point win. Jonty McIvor led the way with four, followed by Darcy Gardner‘s three and two each from Sam Banks and Zac Morris rounding out the multiple goal kickers. Zippy ball-winner and state MVP Baynen Lowe also made a good start, and was just as good in Tasmania’s Round 2 outing against Queensland. The Devils went down by 20 points in a slog, with Lowe’s 20 disposals, nine marks, eight clearances and one goal second only to Banks’ 21 touches and eight inside 50s. George McLeod also had a good game with 18 disposals and 1.2, with Dominic White (14 disposals, four marks) solid in the back half and Gardner (14 disposals, nine tackles, five clearances) also busy. A big first half from NSW/ACT saw Tasmania go goalless to the main break in Round 3, but it was not for a want of trying as the Devils were punished each time they failed to capitalise of gaining territory. They improved to finish with 4.10, as Lowe (27 disposals, seven tackles, seven clearances), McLeod (23 disposals, 11 marks, 2.1), and Jake Dixon (20 disposals, six marks) again worked tirelessly. But it was Alan McLean medallist Banks who was most influential, thriving in a move to half back to have 25 disposals, 10 marks and a combined nine breaches of each arc. With some undeniable class at the top and hard workers throughout, Tassie just fell short of putting together the pieces across the three matches. Banks is certainly one to watch, and has already broken into the Tasmanian NAB League squad like 2018 draftee, Tarryn Thomas.