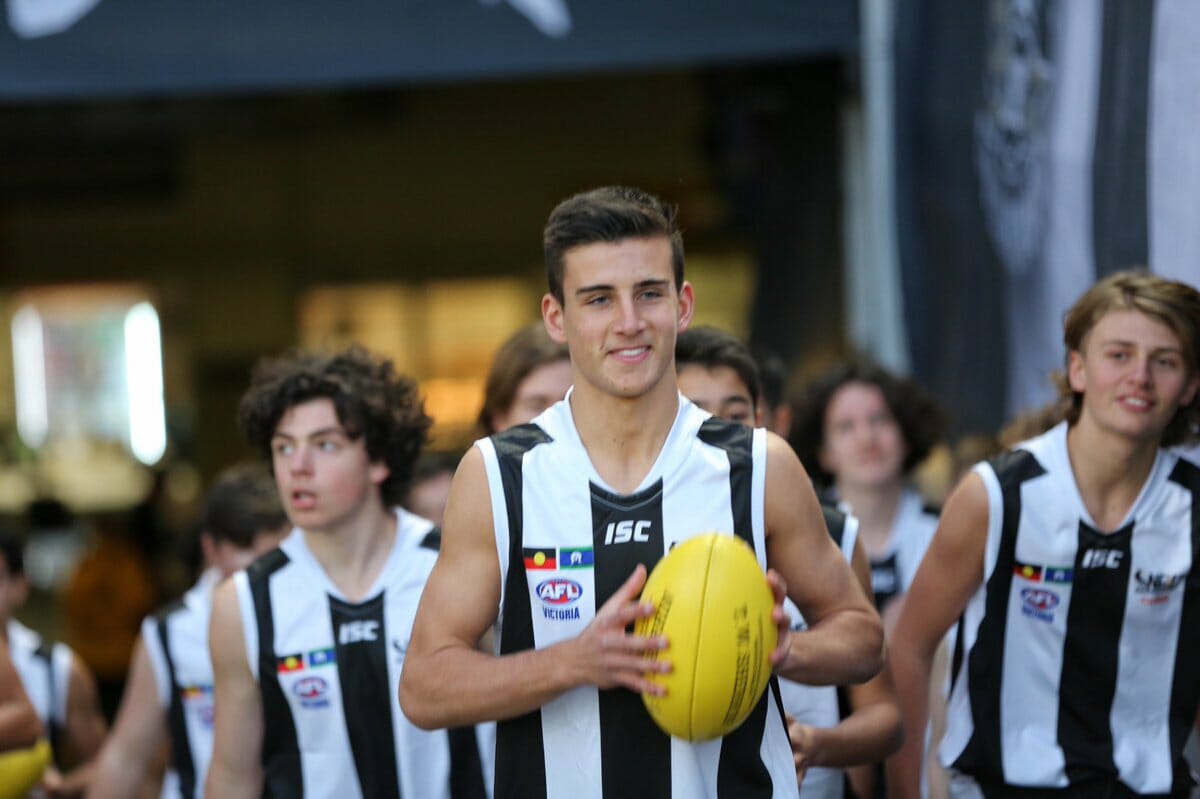 AS the postponement of all seasons commenced over the last few weeks, we head back to the pre-season where we sat down with a number of athletes across the country. In a special Question and Answer (Q&A) feature, Draft Central‘s Peter Williams chatted with Oakleigh Chargers’ Nick Daicos at the NAB League Fitness Testing Day hosted by Rookie Me.

A midfielder/forward with silky skills, Daicos comes from legendary pedigree with his father, Peter‘s 250 games for Collingwood ensuring the youngster is eligible to be drafted under the father-son rule in 2021. Akin to his brother, Josh‘s journey, Nick has only just entered the Oakleigh program in his 17th year, and would have been a consensus choice to play for Vic Metro at last year’s Under 16 national carnival.

The Carey Grammar student also captured attention with his form in the APS competition, running out alongside the likes of former Chargers Matt Rowell and Noah Anderson in what was a successful 2019 campaign. Daicos is poised to get a run through the stacked Oakleigh side in between school football and possible representative commitments should competitions commence, with a pre-season hip niggle now behind him.

Hear what the impressive bottom-ager had to say about his journey, added expectations, and the year ahead in our latest Q&A.

PW: How’s the day been so far?

ND: “Pretty good so far. I’ve been injured over the past few weeks with a hip injury so I’ve just been here supporting the boys. It’s been good.”

What kind of things do you do during testing day when you’re not out there yourself?

“I’m just more getting around the boys and chatting today. Obviously if I was competing I’d be warming up, trying to get the best results I can but as I can’t impact physically I’m just trying to encourage the boys so they can optimise their performance.”

Playing school footy last year and now coming into Oakleigh, how has that been for your development?

“I think it’s been really good. I enjoyed Carey (Grammar) footy last year, we had a good year as a team and the training was quite advanced so it’s been a bit of a smooth transition. Obviously a bit of a change but I’m slowly gauging the standard and adjusting to it.”

Is there anything particularly different between training with school and Oakleigh?

“Clarkey (Oakleigh coach, Leigh Clarke) emphasises on just being really sharp and utilising every minute. It is a bit more professional in that aspect, you can’t really waste a minute.

“You get to training, you’ve got 30 minutes before training to just do some craft work and optimise your performance there. So that’s probably where it’s a bit different, you can’t waste any time at all.”

How do you manage the extra expectations and media attention to just play your own game?

“Well that’s exactly it, I just try and play my own game. I think sometimes it’s nice when you get a bit of praise, and then also when you get in trouble.

“But you’ve also got to realise that you’ve just got to have your small group of people that you listen to and take their opinion – the good, the bad, and the indifferent.”

How much do you learn off or lean on them for advice?

“I lean on them a lot, I’ve got a good little small group. Coaches in particular, Dad, my brother, (are) some people I like going to.

“Leigh (Clarke) has been really good with me just to start with here at Oakleigh and I’ve learned a lot already so hopefully that can just grow and grow.”

What do you see as your strengths on the field?

“Probably just my ability to run with the ball and use it by foot, to bring others into the game.”

Where have you enjoyed playing most?

“I predominantly see myself as a midfielder. I can rotate forward though so it’s a good option to have.”

Going forward, what improvements are you looking to make?

“I really want to improve on my marking this year and then a bit of the physical aspect I think I can improve on. So hopefully playing midfield that can help me.”

Being a bottom-ager, what are your goals for this year?

“Just to grow as a player. Lots of experience this year can hopefully be gained and hopefully can set me up to have a good top-age year and learn the level.”

And with the injury today, is it anything that will delay your season?

“I think I should be alright early on. I’m playing in a practice match (back in March) which we’re still discussing with the physio if I’m going to be on monitored minutes so we’ll see how we go. But I think I should be ready to go as soon as the season starts.”

So you’ll be at Oakleigh for the first few games, then return for the rest after school football?

“Yeah that’s the aim. Hopefully I get a game in early which would be really nice, and then school footy. Then it all starts.”

Who are you looking forward to playing with here at Oakleigh?

“Jamarra (Ugle-Hagan) down forward, I’m really looking forward to him. We haven’t been able to train much in rehab so I’ve just been kicking to him which has been good.

“Then a couple of the on-ballers; Will Phillips, Lochie Jenkins. They’re just all great kids so I’m looking forward to it.”

Is Nick Daicos in the draft this year or next? 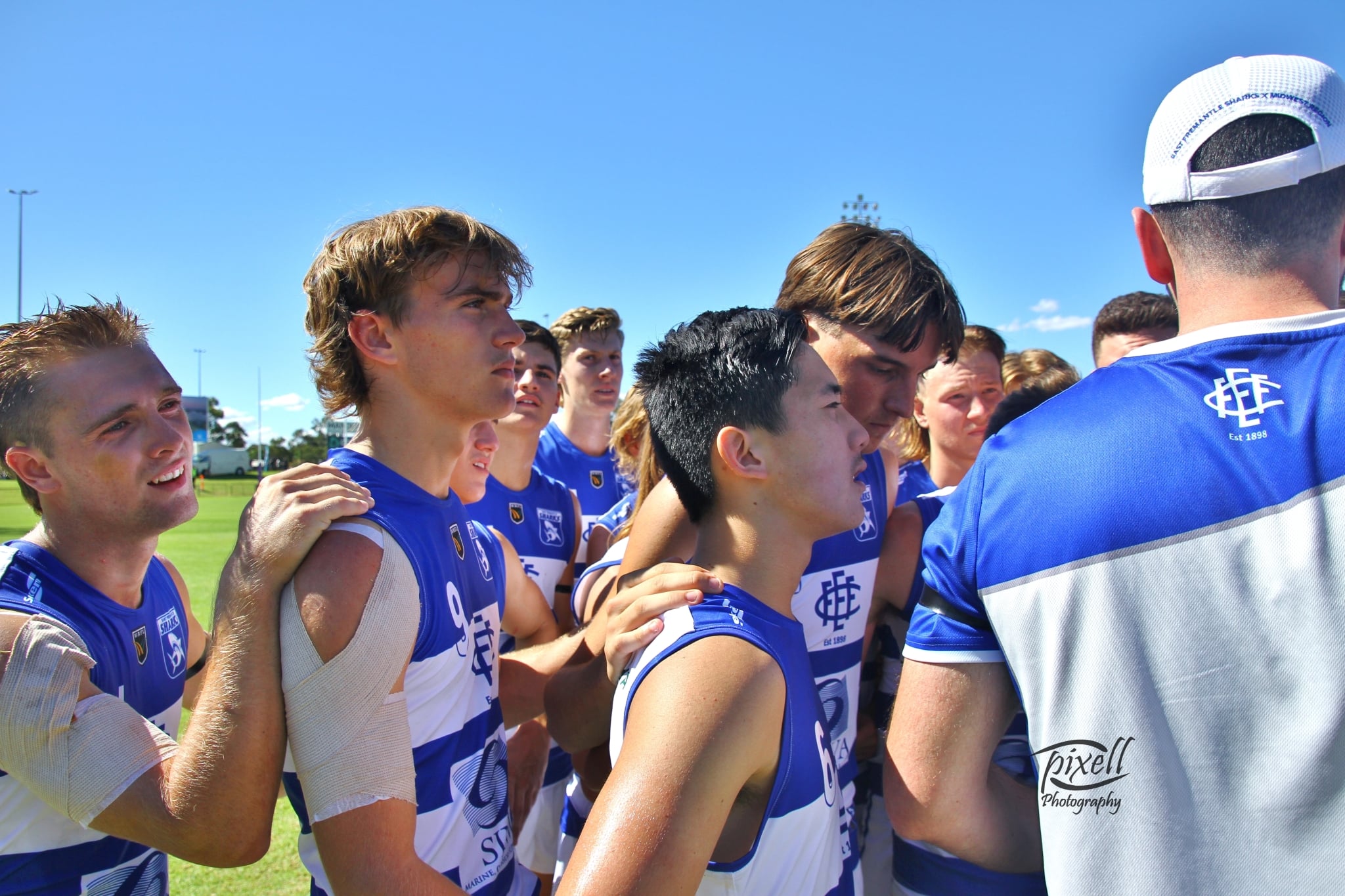