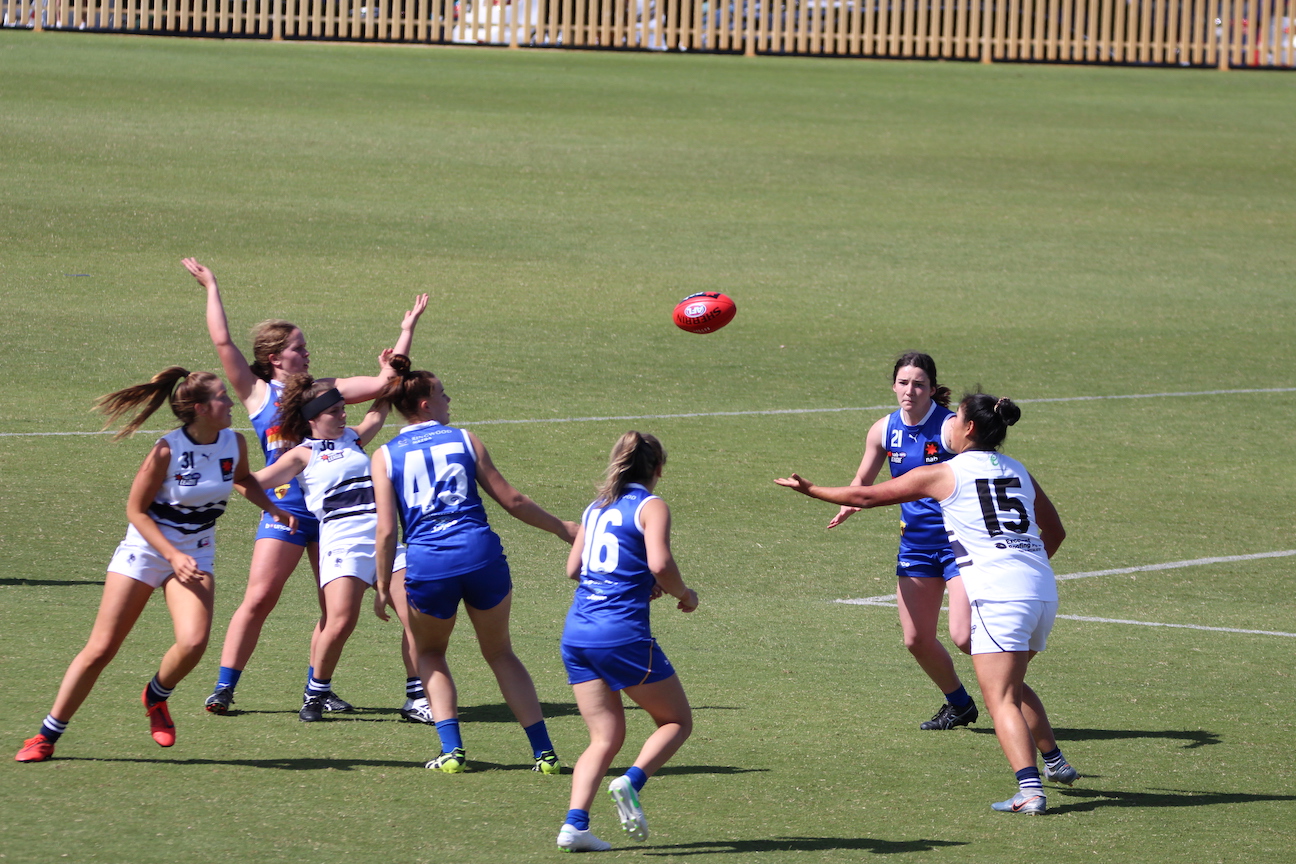 THE NAB League Girls competition continues to go from strength to strength, with seven entertaining games on the weekend throwing up another mixed bag of results and seeing the introduction of the Sydney Swans and Greater Western Sydney (GWS) academies. In continuing our new weekly series, we take a look at the top moments from each match – whether they be game-defining feats, big marks, glorious goals, or otherwise. There was plenty of eye-catching action in Round 6 as some of the nation’s best players churned out another batch of impressive feats.

Oakleigh remains undefeated after knocking off Sandringham under the RSEA Park lights, but the Dragons sure did make it tough. A late charge saw one particularly stirring play, sparked by Tayla Jones at half-back. She swept up a Chargers’ miskick before proceeding to go on a run from the back 50 line to the wing and kicking long to Bridie Hipwell, who managed to get it in front of Ebony Angelopoulos who went on to kick a goal that put Sandy only six points adrift.

With three players with the surname Hamilton in the game, there was always a good chance one of them was going to stand out, but instead all three did; with Jayde and Cynthia (GIANTS) and Zara (Murray) all impressing at Lavington. Cynthia was a busy bee around the ground, winning touches through the midfield, slotting two goals up forward then going back into defence to rack up plenty of mileage. Jayde won more touches than anyone on the ground (24) and was crucial at the stoppages, while Zara provided great run on the outside and an option in transition for the Bushrangers.

It might be a weird memorable moment to have, but for the Sydney Swans Academy, the final siren marked the end of a remarkable four-quarter effort which saw them come and take the points from the Geelong Falcons in a massive upset. With so many even performers, and led by captain Jessica Doyle who booted two goals from 19 disposals, the Swans were finally able to celebrate when the siren sounded at the end of a wet and windy day at Deakin University, Waurn Ponds.

Saward finds her dial at home

Burnie’s Emilie Saward was one of just 10 local North-West Tasmanian players who lined up for the Devils on Saturday, but the occasion is always more special when you’re making your debut. She pulled on ‘the map’ for the first time along with fellow coastal player Joherty Revell, with the duo getting to play in front of their family and friends at Dial Park in Penguin. Tasmania was already in pole position with its four-goal lead at three-quarter time, but Saward put it beyond doubt with her goal at the start of the last, which brought the home crowd to their feet. It was not only a great moment for Saward on debut, but a tribute to the growth of the Devils’ program to have such strong local representation in their first game in the North-West of Tasmania.

Dojiok and Scott provide the spark

Greater Western Victoria (GWV) continued its winning ways with a hard-earned win over Western, doing all the work early before holding the Jets off late. One of the brightest passages came during term one, as AFLW Academy member Nyakoat Dojiok won a holding the ball free kick on the wing, before launching a 40-metre bomb inside 50. From there, Paige Scott swept up and composed herself under pressure to slot the Rebels’ second major. The pair are in irresistible form.

Calder powered to a comfortable win over Gippsland in enemy territory, with a few moments of magic sparking the 41-point victory. Neve Crowley was swung forward to good effect and booted a hat-trick of goals, with the first thanks largely to Alisa Magri. Having snared the game’s first goal, Magri marked on the lead at 50-metres out before wheeling around, taking on a Gippsland defender and popping the ball up to Crowley for their side’s second goal.

Northern pulled off an almighty comeback against Eastern on Sunday, turning what was once a 25-point deficit at one point into an eight-point win. While 15-year-old Ava Jordan was the best player afield and a key spark in the Knights’ midfield, Tarrah Delgado‘s shift from defence to the centre bounces proved a vital one. The 173cm top-ager provided great presence in the engine room to get the ball moving forward, and booted a clutch goal in the final term to give her side a sniff. Stirring stuff.