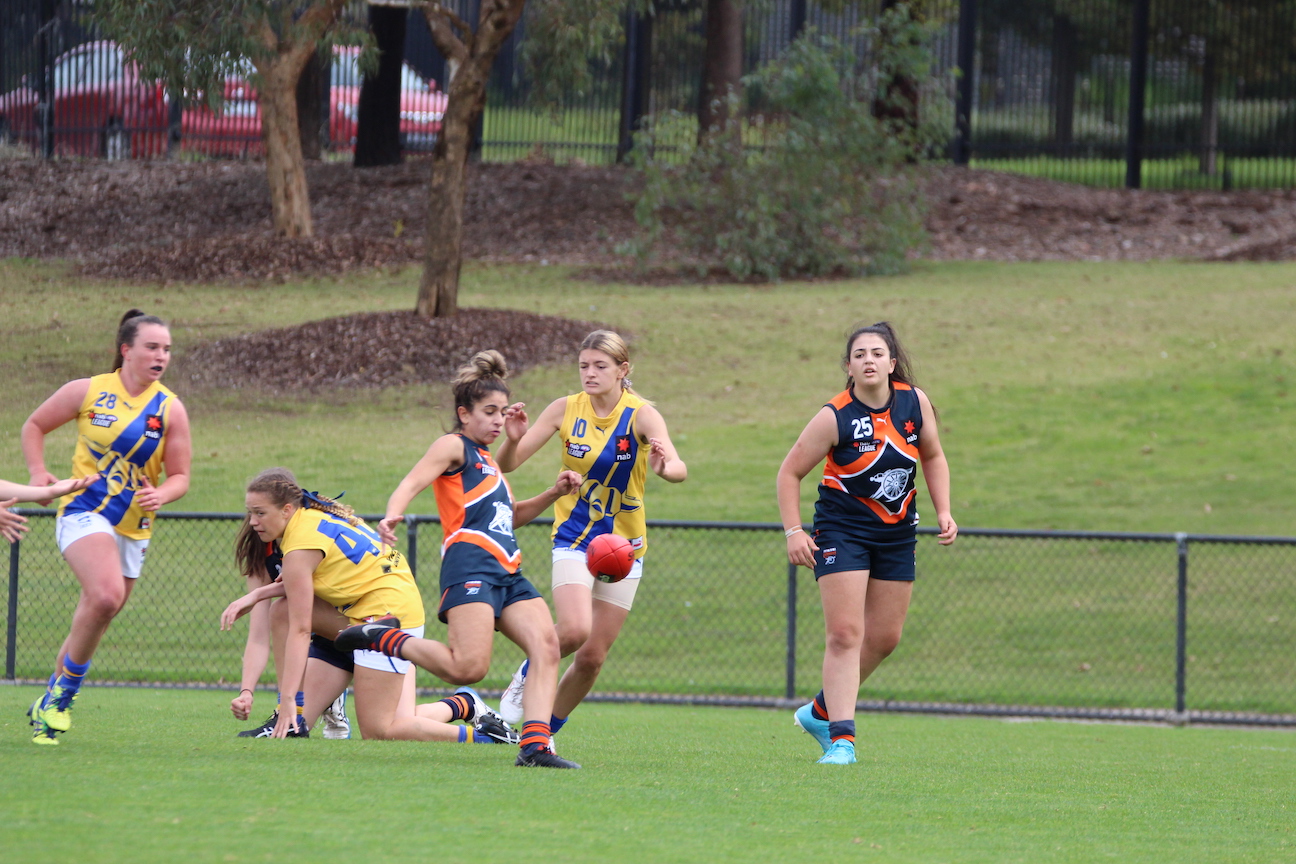 THE NAB League Girls competition has completed its penultimate round, with seven games across the weekend and Northern Territory Academy coming into the fold. In continuing our new weekly series, we take a look at the top moments from each match – whether they be game-defining feats, big marks, glorious goals, or otherwise. There was plenty of eye-catching action in Round 8 as some of the nation’s best youngsters churned out another batch of impressive feats.

Halfway through the second term Eastern’s Georgia Wilson and Sandringham’s Emma Stuber found themselves running towards the same spilled ball in the Eastern forward 50. When they reached the ball, the two bulls threw themselves at each other for a bone crunching bump, with Wilson ending up closer to the ball and getting it to Alyssia Pisano who snapped the goal from the pocket for Eastern’s second.

In what was a tight contest throughout the match, Calder Cannons was holding on to a narrow six-point lead over the Western Jets at the final break. A 50-metre penalty to Alisa Magri in the first minute gave the Cannons some breathing space, but it was a remarkable goal from Jessica Zakkour that sealed the deal. As the live commentary said “Zakkour snaps truly and wins her team the match”, with the goal coming at the perfect time to just drive the final nail into the Jets’ coffin.

Trailing by 11 points at three-quarter time, Tasmania needed someone to step up in the last. Enter Amy Bissett, who kicked two of the Devils’ three goals in the final term to get her side over the line. Having already kicked one in the second quarter, her second brought the Devils within a kick and her third effectively sealed it by extending the narrow lead that Tasmania had established. Bissett has been an important presence at centre half-forward this season, but she saved her best and most impactful performance for when it mattered most.

Oakleigh’s Mia Clift ran onto a ball that spilt over the top of a contest, got it forward to Kalani Kearns who spotted Charlie Rowbottom on her own inside 50, who took on two falcons players to handball to Sarah Morley for Chargers’ second goal of the day and a much needed major.

Shepherd by name and nature

Captain for the day in her return from injury, gun Dandenong Stingrays bottom-ager Emily Shepherd proved just the leader her side needed. One to lead by example more than voice, as coined by usual co-captain Abbey Jordan during the game’s broadcast, Shepherd came to life in the second term and helped guide the ‘Rays to a handy half time lead. She was everywhere, showing her smarts to win the ball in dangerous areas and get involved in scoring chains, seeming to have more time on the ball than others.

Northern Territory Thunder took a while to kick into gear, but eventually they did, booting four second half goals against Greater Western Victoria (GWV) Rebels. Trailing by six points at half-time, the Thunder came out with a flurry, having nine scoring shots to one and changing the momentum of the game, with Ashanti Bush slotting two, and Freda Puruntatameri and Bella Clarke also kicking a major each.

Gippsland managed to hold on for its first win of the 2021 NAB League season, staving off the desperate Bendigo Pioneers across a tense final few minutes. The ball was locked in Bendigo’s forward half for nearly all of that time, with Gippsland’s game-long lead whittled down to three points, and eventually one as a series of Pio’ shots went wide or fell short. You could feel the urgency embedded in each player afield and the officials watching on in agony – none more so than Bendigo captain Tara Slender whose passion spilled over on the live telecast. In the end, Gippsland survived for one of the more memorable triumphs in NAB League Girls history.