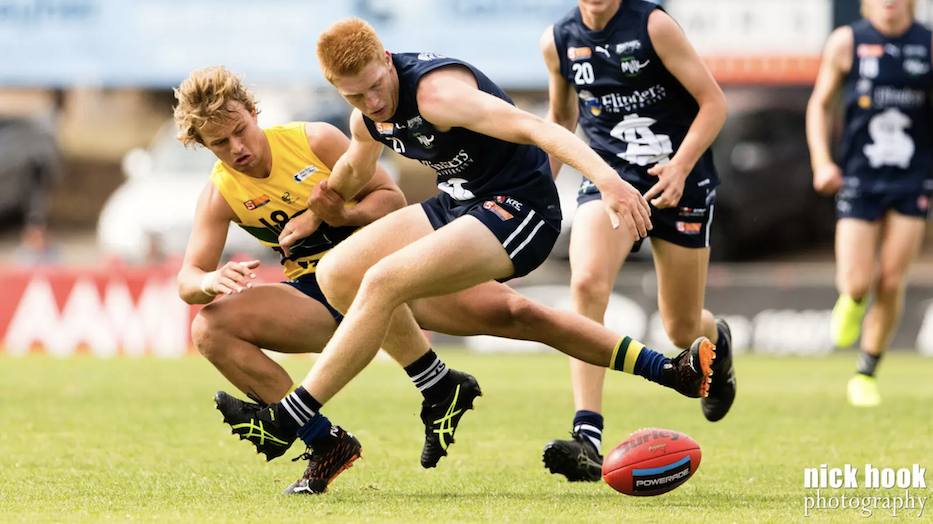 SOUTH Adelaide midfielder Matthew Roberts broke through for his maiden SANFL League outing on Saturday, joining fellow top 10 AFL Draft candidate Jason Horne in the Panthers’ seven-point win over Woodville-West Torrens (WWT). The hard-working youngster earned his call-up though sheer domination in the Under 18s, where he averaged 32 disposals, 6.3 clearances, and almost two goals a game across his three outings this season. Roberts also turned out for the AFL Academy last month, playing exclusively up forward in the side’s heavy loss to Geelong VFL. The 18-year-old has long been one of South Australia’s most promising prospects, having represented his state twice at Under 16s level and dominated the SANFL Under 18s competition as a bottom-ager. He also captains the St Peter’s College First XVIII and looms as a key figure in SA’s Under 19 carnival side this year. Roberts’ running capacity, decision making, and ability to hit the scoreboard while resting forward are just some of the desirable traits which have him pegged towards the pointy end of this year’s draft crop. He is the prospect under our SANFL Player Focus microscope this week; we run you through his game quarter-by-quarter, and bring you the key stats out of his Round 6 showing.

Roberts started and stayed at half-forward in the greasy conditions, but set the tone for himself early as the wet ball did not affect his cleanliness. An early gather around a pack with a slick handball under pressure was a sign of things to come as all his work was done below his knees for the day. Although he was a little passive at some stoppages around forward 50, he was still trying to work into his first League game and understand where to position best. Despite this, he did manage to get first hands off a ruck tap but was unable to find a teammate before the ball was knocked from him. Roberts pushed in at centre bounces when starting high and managed to wrangle in a hacked kick to space and find a teammate with a beautifully weighted kick inside 50. Pushing up the ground when the ball was stuck in his defensive 50, he did a good job of positioning himself to be able to hit the contest from a clearing kick at pace, and when presented the chance to crumb, he did so very well on one occasion, opting to find a teammate with a sweeping handball which opened up the attacking fore.

The second quarter was one of Roberts’ quieter ones although it did highlight his good acceleration to apply defensive pressure, which he did all day. Two tackles are not earth-shattering but in his first League game, he adjusted to the pace well and would have registered plenty more pressure acts without a tackle. Once he settles in, you can expect that tackle count to rise. A hack kick off the ground also assisted with the surge forward as he applied a defensive effort to follow up after an Eagles defender swept up at ground level.

His output picked up again this quarter as he continued his good timing to rove around packs and do it with one grab, brilliantly composed. He showed good strength to bump off a tackler on one occasion, showing he is physically up to the League level, accentuated by his stability over the ball in congestion having rarely hit the deck. Pushing down from his high positioning after a deep forward entry from the centre bounce saw him gather cleanly after the ball spilled out, before snapping around on his trusty left boot to put through his first League goal – a tidy and clean finish in-tight. Although a pair of fumbles came later in the quarter off some hot, tumbling balls, he showed he was getting to good positions to win his own ball. Roberts then made up for them with a perfect pass to Jake Tarca inside 50 for a goal. He had a couple of missed handballs on the far wing, but also showed solid positioning after contests and packs to either fill gaps, get dangerous, or prevent exits for the opposition.

Q4: Although it was not a busy quarter like the previous for Roberts, he did some important things as the tight contest intensified. More clean pickups and quick hands from below the knees allowed the Panthers to maintain possession on several occasions. He also started to find his feet with his positioning in forward half stoppages, often leaving the contest to ready his run into forward 50 should his side clear it forward.

Coming off a dominant Under 18 performance, Roberts repaid the faith from head coach Jarrad Wright for bypassing a typical Reserves induction game. A serviceable outing playing a role should warrant another selection as he seemed comfortable in the contest to gather cleanly so often. 14 disposals with no marks indicates his ground ball nous and barring a few missed handballs, his disposal was reliable all game. The half-forward role is a difficult one to make a massive impact on the game, but Roberts did well to maintain his space and get to the front of contests to keep driving the ball forward. He was able to do this by not always flying for contests and positioning himself well, while working hard to get dangerous when the opportunity presented itself. Overall, a solid first League game with a goal for Roberts.