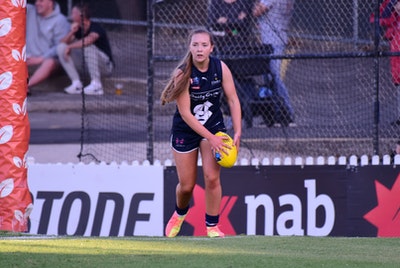 IN summarising the 2021 South Australian National Football League (SANFL) Women’s season, Draft Central will run through a team-by-team review of how each of the sides fared, and who some of the standout performers throughout the clubs were. The next team in the firing line is South Adelaide.

Season in a Sentence: “South Adelaide’s success in recent years caught up with the Panthers early in the season as the amount of exits to AFLW level saw them blood new talents, and whilst they stormed home to play finals, fell short in their semi-final against West Adelaide.”

The ever-reliable midfielder had another sensational season to earn SANFL Women’s Team of the Year honours in 2021. The ball-winning star averaged 15.9 disposals, 3.5 marks, 4.6 tackles, 2.9 clearances and 3.4 inside 50s across all 12 games to lead from the front in an ever-consistent effort. Able to cover the ground with ease and be used in transition going forward, Campbell rarely put in a bad effort, with seven games featuring 15 or more disposals to be a dominant player through the middle of the ground.

The AFL Women’s Academy member played a variety of roles in 2021 after being a forward last year. Starting forward and then playing midfield, especially on the wing, Schirmer eventually transitioned into a defender, making her an all-round standout performer. Her athleticism – particularly her acceleration off the mark – and game sense was impressive, and the State Academy member earned a place in the SANFL Women’s Team of the Year on the wing, but it was her versatility that really shone this season.

Notching up her 50th SANFL Women’s game in season 2021, Smith was another consistent player, managing all 12 games and showed maturity beyond her years. Smith averaged the 12.2 disposals, running at an elite 83 per cent, as well as 3.3 marks, 3.9 tackles and 2.4 rebound 50s. She was named in the back pocket of the Draft Central SANFL Women’s Team of the Year, and was one of the standout, consistent defenders all season.

The Adelaide Crows ruck earned a place on the bench in the Draft Central SANFL Women’s Team of the Year, after managing 10 games for the Panthers. Whilst clearly having the talent to play at the top level, the strength of the Crows enabled the Panthers to benefit from her at state league level, and the ruck went about her business week-in, week-out. McKinnon averaged the 13.4 disposals, 3.6 marks, 2.7 tackles, 2.1 clearances, 3.3 inside 50s and 1.6 rebound 50s, and had 15 or more hitouts in all bar one game for the season.

South Adelaide had a real even group of contributors, with State Academy member Tahlita Buethke having a breakout season at the level through the midfield, whilst Lisa Whiteley, Brianna Wedding and Sophia Flanagan-Sjoberg were consistent all year. Jordann Hickey, Teah Charlton, Tahlia Meyer and Hannah Munyard returned from AFLW level late in the season to make an impact, as Jorja Hooper showed great signs for the future up forward, working well in tandem with Jess Kirk.