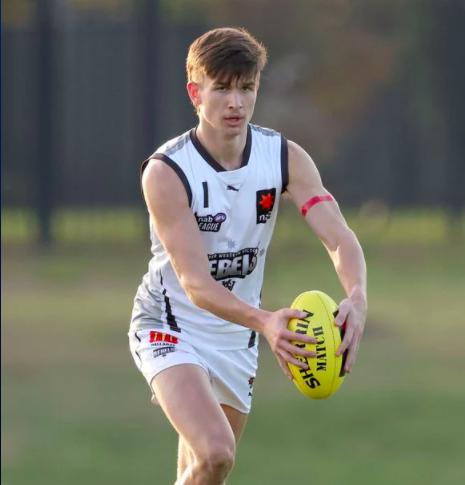 Image Credit: Jonathan Di Maggio/AFL Photos
GREATER Western Victoria (GWV) Rebels prospect Sam Butler is one of the most promising players out of the country region in 2021, and has a name familiar to most as the brother of St Kilda forward, Dan. The 18-year-old has a similar burst of speed and goal sense, but has recently gained greater exposure in the midfield where his ground level game has shone. Most recently, Butler starred in the Rebels’ comprehensive 79-point victory over Gippsland Power at Mars Stadium, spending a half up forward before being thrust into the centre bounce mix. He ended up with 27 disposals, six marks, seven tackles, and two goals to come under our NAB League Player Focus microscope for Round 8.

2021 NAB League, Round 8 | GWV Rebels 16.20 (116) def. Gippsland Power 6.1 (37) Player Focus: #1 Sam Butler (GWV Rebels) Stats: 27 disposals (11 kicks, 16 handballs), 6 marks, 7 tackles, 6 inside 50s, 1 rebound 50, 2 goals Quarter-by-quarter: Q1: After his recent midfield initiation, Butler started the game back in his equally familiar forward post as the GWV coaches shuffled their magnets. He served a reminder of his potent forward craft, able to snare two goals with sound finishing inside 50. The first saw him nip in front of the leading Josh Rentsch to mark overhead, before converting a 35m set shot with aplomb. The second was in open play, as Butler picked up the bobbling ground ball on the outside of a forward 50 stoppage and quickly snapped it home as he was spun in a tackle. Outside of his scoreboard impact, Butler worked hard off the line to impact the opening centre bounce and get his hands on the ball early, looking clean at ground level with his ability to swoop on loose balls at speed and flick out effective handballs. He also laid a couple of strong tackles, chasing and locking up opponents, to cap off a productive term which yielded six disposals (two kicks, four handballs), two tackles and two goals. Q2: Continuing in his forward role, Butler began to find even more space as he pushed up the ground before helping to link GWV inside attacking 50. His first act was a well-judged overhead mark from a long Gippsland kick-in, locking the play in his side’s front half. He showed strong hands and judgement once again with a mark on the wing, before working forward to mark uncontested inside 50. As Butler looked to stamp his mark on the game, he fell short on a couple of occasions. His mark just inside the 50m arc saw him go back and take a set shot, which fell short, while a running foray saw him caught holding the ball as he streamed towards goal, looking to take on the defender with a second bounce. Ultimately, Butler ended up with a similar output in terms of numbers, managing six disposals (three kicks, three handballs) and four marks as he found space further afield, suiting the high half-forward role. Q3: Butler’s return to the midfield came in term three as he was rotated on-ball after around five minutes. While it took him a little time to warm to his engine room operations, Butler got involved with some sharp touches on both sides of the contest. He darted a beautiful inboard kick to Marcus Herbert at centre half-forward, and looked typically assured at ground level with his clean use by hand. He was a touch less productive with his disposals as Gippsland did well to pressure the ball carrier, with a lot of his handballs to the first option and sometimes transferring said pressure. Still, Butler added another six disposals (two kicks, four handballs) and a mark as he adjusted to the midfield move. Q4: The fourth quarter was Butler’s best in terms of numbers and right up there with the opening term for impact – just in a different department. He started with great intent, earning a holding the ball free kick at the first centre bounce by hunting the ball carrier and catching him unawares. From there, a lot of Butler’s work was done around the stoppages with continually sharp gathers at ground level. He showed an innate ability to keep his arms up and disposal of the ball in tackles, while also using his burst of speed to bustle to the outside. He added a bit of run on the outer via a one-two play with Fraser Marris, and capped off a really solid outing with nine disposals (three kicks, six handballs) from midfield. Closing thoughts… Butler again showed just why he is one of GWV’s most promising prospects in 2021, hitting the scoreboard when stationed up forward before proving sharp at the contest through midfield. Having boosted his running capacity, the 18-year-old has been able to more consistently showcase his key strengths, in that burst of speed and wickedly clean hands. He can impact at ground level and in the air, while also providing solid tackling pressure and the added bonus of goal threat. Going forward, Butler could perhaps back his pace more when coming away from the contest, taking more time to get free himself and taking more meterage before disposing of the ball. His first-option policy is working pretty well at the moment, though.
Image Credit: Jonathan Di Maggio/AFL Photos
Login
Please login to comment
0 Comments
Inline Feedbacks
View all comments
Recent articles