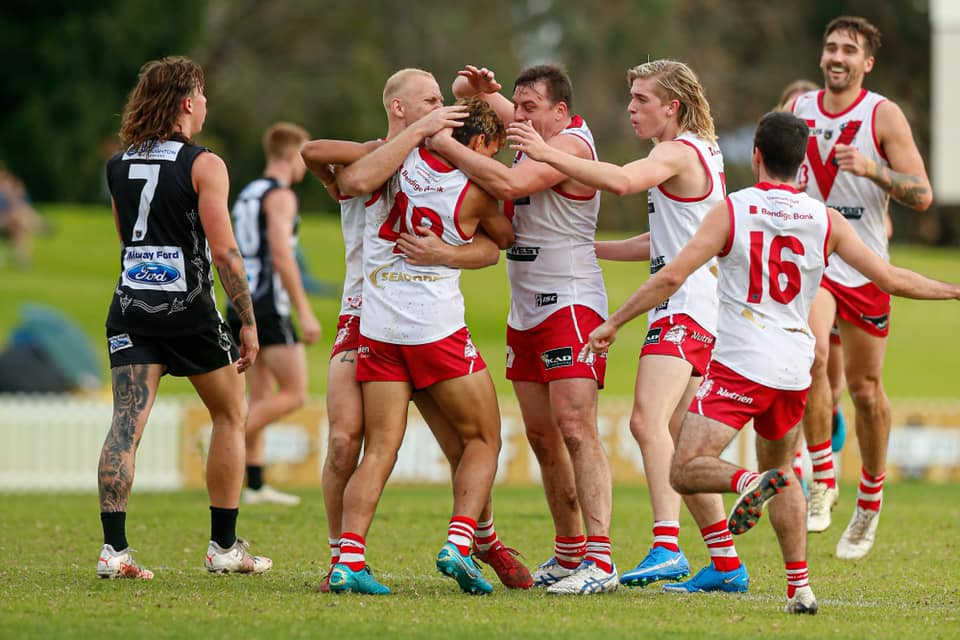 Jesse Motlop celebrates a goal on his League debut | Image Credit: South Fremantle/WAFL
SOUTH FREMANTLE young small forward Jesse Motlop, the son of former Port Adelaide and North Melbourne player Daniel, has had an impressive 2021 season across the WAFL Colts and PSA competitions. His form and undeniable potential earned him a WAFL League debut with South Fremantle, against fellow finals contenders Swan Districts. The Fremantle Next Generation Academy prospect ended up being an important part of the side’s six-goal victory, chiming in with two goals of his own in the third quarter whilst setting up a few more throughout the entirety of the game.

2021 WAFL League, Round 15 | Swan Districts 9.5 (59) def. by South Fremantle 15.5 (95) #49 Jesse Motlop (South Fremantle) Stats: 13 disposals (10 kicks, 3 handballs), 6 marks, 4 tackles, 1 inside 50, 2 goals Q1 It was a low-key opening term for Motlop in his debut senior outing. Starting the game on the bench, he wasn’t sighted until about eight minutes in as he took his position in the goal square as the deepest forward for his first centre bounce. His first involvement in general play came deep inside 50 where he hit the front and centre of a marking contest, cleanly picking the ball up off the ground and in a position to run into an open goal, but was brought down as soon as he picked it up for a stoppage. He held the ball to an opponent not long after to get a stoppage in front of goal, though it didn’t result in anything. The only disposal Motlop would record for the first term came as he pushed up the ground to be a switch option from the corridor to the boundary, taking the ball on his chest uncontested before running it up a few steps and then lacing it out to a teammate on the wing, who was able to move the ball quickly and get it inside 50 for a goal. Despite not racking up numbers on the stats sheet, Motlop was involved in the South Fremantle forward half, pressuring opponents to cause a few turnovers and stoppages, giving his side opportunities to score and making his one kick count. Q2 Once again taking the role as a deep forward, Motlop wasn’t given many opportunities to use the footy, with the talls of South Fremantle being the targets and Swan Districts doing well to intercept balls as they flew in. He did continue to show the pressure work he did the previous quarter, laying two tackles around the forward 50 where his second efforts saw him get back at the opposition with the ball. He showed a lot of courage at times as well, getting involved in a marking contest where neither player held the ball, but he got straight back up to follow up. Motlop moved up the ground to get involved when it was a bit of an arm wrestle, where he won the ball off the hands of a marking contest and followed his momentum by running back towards his defensive 50 through traffic, able to maintain possession whilst running through a pack of five Swan Districts players. He side-stepped to avoid being grabbed and hit a handball to a runner from the backline. He made it obvious the front and centres were a speciality area a few times, demonstrating why he was being paired under a tall forward down deep with his clean pick-ups below his knees. Motlop worked into the game well in the second quarter, making the most of his opportunities to show his potential for eye-catching plays, but really impressing with his pressure work, second efforts and reading of the ball off hands more than anything, playing his small forward role particularly well despite not hitting the scoreboard.

Q3 The third quarter saw Motlop taking a bit more freedom and pushing up the ground, getting free around the back end of the centre square to be used a couple of times by his teammates. In those instances, he was able to lose opponents with his acceleration or repeated lead efforts. He followed up with generally good ball use, spotting out leading teammates up the field to put them in a good spot to move the ball forward. One kick into the middle of the ground initially looked poor, but bounced well for his teammates to win the contest and get it long forward for an easy South Fremantle goal. Motlop’s high work rate was again on display, as he made gut runs to impact opponents, even if they moved the ball on before he got there he’d follow up and try and impact the next contest. He got himself on the scoreboard with two goals in the third quarter, with both being a good example of his forward craft and ability to get free in dangerous spots. The first was more through his high work rate and repeat leading efforts, as he lost his opponent inside forward 50 and was spotted up by a teammate, taking a mark over his head about 40 out right in front of goal, where he went back and slotted it straight through from afar. The second goal came through his footy smarts, peeling off from where a pack was going to form, standing free right in front of goal about 25 out, then being used by his teammate coming out of the pack taking it on the chest and slotting his second. Motlop continued to do the things he had been doing well in the third, whilst adding two goals for some additional impact and reward for all his hard work over the game. When given the freedom to push further up the ground, he finds the ball and can get into good spots to be a marking option, with generally strong ball use forward and a great ability to kick start scoring opportunities with his disposal choice. Q4 As both teams reverted to a safer way of moving and carrying the ball the opportunities for a front and centre specialist dried up very quickly, meaning Motlop wasn’t as lively around the goals but still won a bait of ball around the boundary line inside 50. There were a couple of times he found himself stuck with a close option, but opted to kick to the square or go for goal, but the Swan Districts defenders would intercept and move the ball on. Moved up the ground and got a mark in the defensive 50 as South brought it in from a behind and kicked well to a teammate. He essentially handed a goal to one of his taller teammates in the final quarter, as he collected a ground ball off one bounce about three meters out from the goal square, standing his ground in a tackle as he spun to face the goals, handballing it off to ensure it was a goal. Closing thoughts: It was an impressive debut at League level for Motlop after impressing at Colts and PSA levels through the year. He looked comfortable amongst bigger bodies and didn’t noticeably struggle with the physicality, looking courageous as he ran head first into packs and impacted contests in the forward half of the ground. He had quite a few flashy moments with his agility and ability to find the right options with his disposal, setting up scoring plays, but his fundamentals of the game and work rate are what ultimately sets him up to be the smart and damaging player he is, forcing turnovers or backwards disposals from the opposition by pressuring them with his closing speed. This game showed a good base for Motlop and suggests plenty of potential to impact at the next level.
Image Credit: South Fremantle/WAFL
Login
Please login to comment
0 Comments
Inline Feedbacks
View all comments
Recent articles