Draper more than the third wheel in promising Panthers trio 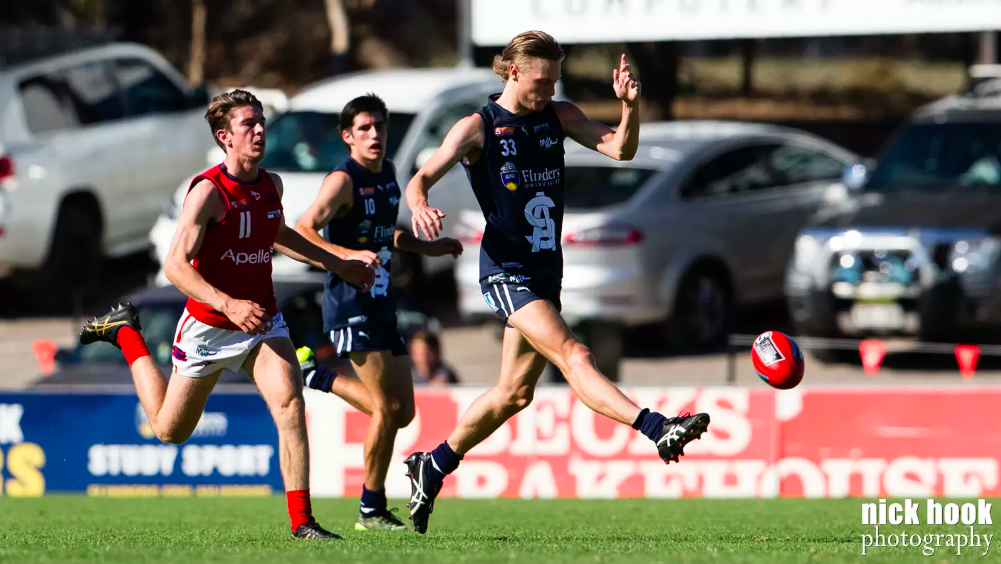 THE South Adelaide Panthers boast the most promising junior footballing trio in South Australia in 2021.

Pick one candidate Jason Horne has spent the past couple of seasons matching it with the SANFL’s best at League level and ball-magnet Matthew Roberts appears a strong chance to join him in the first round of the National Draft.

But Arlo Draper has been on the radar of AFL recruiters for as long as Horne and Roberts, with the teenaged Panthers standing out at club and state level since bursting onto the scene as Under 16s.

Hailing from the Willunga Football Club in South Australia’s acclaimed McLaren Vale region, Draper has compiled an impressive resume of his own.

Recruiters and scouts from across the country have high hopes for Draper, whose class, one-on-one strength and considerable upside has seen him also pegged in as a likely first round selection.

“I’m a fairly unique type of player,” Draper said. “I move well and tend to make good decisions and I also have the ability to play anywhere on the ground.

“I think I have some similarities with Connor Rozee in regards to his speed, agility and forward prowess.”

Away from the footy field, Draper describes himself as a “relaxed kind of guy” who loves watching a good movie.

“I like to consider myself somewhat humorous, but that’s debatable I’m sure,” said the on-baller.

Although he has spent the past month sidelined with a high ankle sprain sustained whilst training in June, Draper earned a promotion to the Reserves earlier in the year after proving a class above the Under 18 competition.

“I’ve really enjoyed the season so far, I’ve been playing pretty consistent footy with the Under 18s which has been great,” Draper said.

A consistent ball-winner throughout the year, Draper’s standout game of the season to-date came in South Adelaide’s narrow three-point triumph over Central Districts at Flinders University Stadium, in Round 4 of the SANFL Under 18 competition.

Draper started the game in the centre square, winning his fair share of contested ball and proving a handful at stoppages, before coach Mark Clayton shuffled the magnets and sent him to the goal-square.

He flourished up forward, easily outmuscling his direct opponent and reading the flight of the ball well to take a couple of strong marks in attack, finishing the game with 24 disposals, three goals, four marks (two contested), six clearances and five inside 50s in a match-winning display. It saw him elevated to the Reserves just a couple of weeks later.

“I’ve loved getting a bit of exposure to the senior program,” Draper said. “I’ve found that I transitioned pretty comfortably. I know a fair few of the boys in the ressies so having those connections has helped.

“Some of the seniors guys have been really good with getting me adjusted to the structures and what not. I think I adjusted to the speed and bigger bodies fairly quickly and felt really comfortable in the midfield role I was playing.”

Draper credits much of the recent success of the South Adelaide junior program to former Panthers Centre of Excellence and current SA pathways coach, Tony Bamford.

“I think the change of culture especially in the junior levels started with Tony Bamford,” Draper said. “Although I never got to play under ‘Bangers’ at South, he’s regarded as the one that got our programs going and then that’s been followed on by Mark Clayton who runs it all now.”

“Mark does more work than anyone and is extremely passionate about the junior footy at South,” added Draper.

Given South Adelaide’s willingness to blood their talented juniors in the club’s league side, Draper has his sights set on a potential senior debut in the later stages of the season.

“I believe I have what it takes to play in the league side,” he said. “The head coach ‘Boofa’ (Jarrad Wright) is really good with communicating with me about where I’m at and what I need to work on and I feel I’m building really well.

“Obviously our league team is pretty strong this year, if I get the call up at some point I’d be really excited and ready to go,” added the teenager.

Although the AFL faces an uphill battle to stage the Under 19 National Championships, Draper looks set to play a pivotal role for South Australia, should the carnival take place.

“If I’m lucky enough to get into the playing team I think I’d see myself running through that midfield/forward type of role, but I can also move down back if there’s a specific role I can play down there on the day,” he said.

Draper is one of the standout prospects in a South Australian team which looks capable of matching it with the highly-fancied Victoria Metro and West Australian sides – at full strength.

“Obviously Jason Horne and Matty Roberts have been doing alright for themselves so far, but I really like how (Sturt’s) Morgan Ferres has been playing this year,” Draper said.

Despite missing out on selection into the AFL Academy, Draper has pieced-together a consistent season for South Adelaide and has demonstrated his ability to dominate games through the middle and up forward. His talent may well spark a bidding war between the top flight’s two South Australian sides, within the first 15 picks.