Roberts rises up the ranks with skills, smarts, and composure 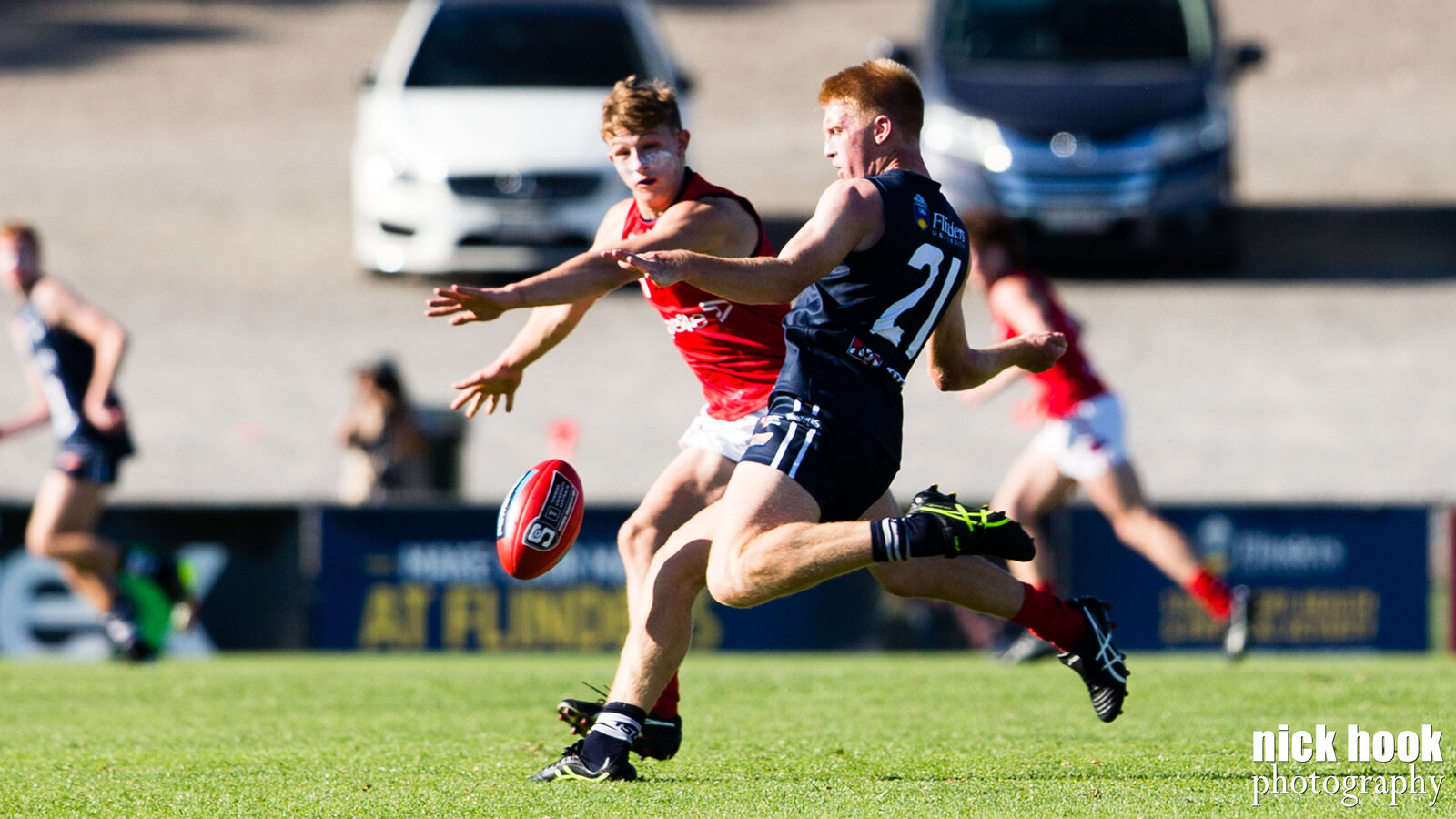 Matthew Roberts gets a kick away | Credit: Nick Hook Photography

SOUTH Adelaide teenager Matty Roberts likens his best traits to that of Western Bulldogs superstar Marcus Bontempelli, and appears set to be among the first handful of midfielders selected in November’s National AFL Draft.

A consistently prolific ball-winner with clean skills and a high work rate, Roberts’ ability to hit the scoreboard has set him apart from those around him in recent years.

“I would say I’m skilful, smart, composed and have the ability to go forward and impact the scoreboard,” Roberts said. “I look at Marcus Bontempelli to model my game off, I’m not as tall as him but I feel we have similar attributes, such as being a left footer, a good ball user and decision maker and being able to impact up forward.”

Roberts, who has boarded at Adelaide’s St. Peter’s College since Year 10 but lives on a farm between Langhorne Creek and Strathalbyn, reinforced his first round credentials by averaging 32 disposals, 7.7 tackles and 1.7 goals in three Under 18 matches earlier in the year.

“I’ve really enjoyed my season so far,” he said. “It was really good to spend the full pre-season with the senior squad at South and then start the season really strongly in the Under 18s and school football at St. Peters.”

He didn’t stay at the Under 18 level for long and bypassed the Reserves entirely en route to making his SANFL league debut in Round 6, where he gathered 14 disposals and kicked a goal alongside fellow gun teenager Jason Horne.

“I loved being able to play up in the seniors,” he said. “It was really good to play alongside the senior boys that I’ve looked up to at South from when I was coming through the ranks, so that was really good experience. I found the speed definitely quicker, but as long as you were clean and made your decisions quickly I found it fine.

“I learnt a lot from Bryce Gibbs and Joel Cross regarding where to run and set up and how to use you body to give yourself the best chance to get the ball and use it well,” said Roberts, who turns 18 on July 31.

While the ascent was steep, it hasn’t been all smooth sailing for the consistent midfielder, who has spent the past two months nursing a syndesmosis injury sustained whilst playing college football.

“I hurt my right ankle in a school game against Rostrevor,” he said. “It got stuck underneath in a tackle and rolled over inwards. But I’ve been back running now for around four weeks and have been doing change of direction (drills) for about three weeks.

“I’ve been trying to build my fitness back up over that time. I was hoping to be back playing this weekend but due to (South Australia’s) lockdown I’m hoping to be back next week, as I need to do a full week of full training before I get back to playing. So that will make it 10 weeks since (sustaining) the injury.”

Roberts is a natural sportsman, who is just as comfortable on the cricket field as he is on the golf course.

“I like to play pretty much all sports but my main get away from footy would be to go out and play golf,” he said. “I’ve had some pretty competitive matches with my dad, brother and mates. But I also enjoy spending time with my girlfriend and mates, going away with family up the river with the boat or heading down to the beach,” he said.

2021 is an important year for Roberts who, like many draft hopefuls, has had to juggle footballing commitments with Year 12 studies.

“Sometimes it gets a bit tricky, especially at the start of the year as I had cricket finishing up and footy getting underway, but I did a Year 12 subject last year so this year I’ve only got four subjects, so I have more free lessons,” he said. “I try to do most of my homework in those free lessons so after school I’m free to focus on footy or the gym. I feel like I’ve managed things pretty well so far this year.”

Along with his obligations to South Adelaide and St. Peters, Roberts also spent a week rubbing shoulders with the AFL Academy squad in April. While the elite Under 19 group was beaten handily in their showcase outing, Roberts says he learned plenty from the overall experience.

“It was really good to spend time with the best players in the country and see what kinds of things the other players do to get themselves ready for games, how they recover and all that kind of stuff,” he said. “The game (against Geelong’s VFL side) was not too bad, but we lost by 130 points which was the biggest loss I’ve been a part of. I learned you just have to be clean, make good decisions, always talk as a team to help each other out and just hit the easy kicks,” said Roberts.

Heading into the second half of the season, with the National Championships approaching, Roberts highlighted South Adelaide teammates Jason Horne and Arlo Draper, Port Adelaide father-son Jase Burgoyne, smooth-moving utility Nasiah Wanganeen and North Adelaide ball magnet Hugh Jackson as the South Australians to watch. He also made mention of potential bolter Isaac Birt, who Roberts said has “worked really hard and has been really consistent” in his role on the wing.

Featured Image: Matthew Roberts gets a kick away during the 2021 SANFL Under 18s season | Credit: Nick Hook Photography