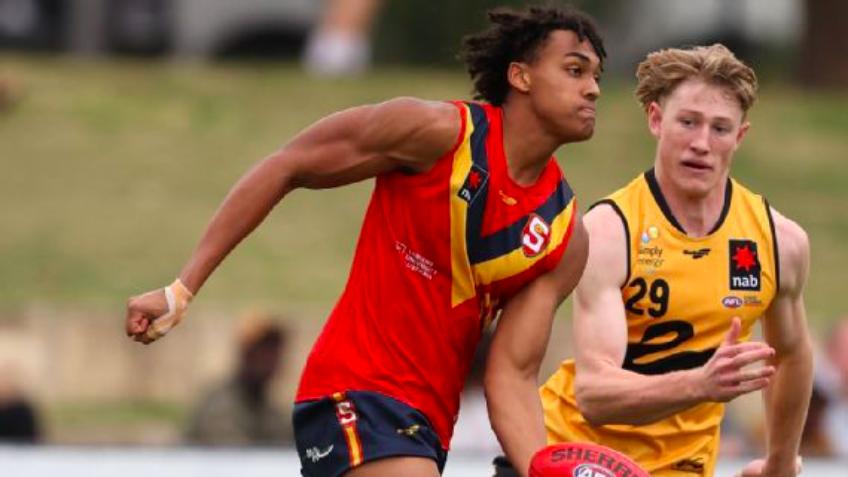 Image Credit: Paul Kane/Getty Images
WOODVILLE-WEST Torrens Under 18 skipper Jordan Lukac was recently added to the extended AFL Draft Combine list, proving reward for the promising rate of improvement he has shown in 2021. The 196cm prospect turns 19 in September and represented his state at the level this season, with his athleticism and physical intent serving well. On Saturday, he helped lead the Eagles to a fourth Under 18s decider in five years with a handful of goals as one of the dominant bigmen afield. We put Lukac’s preliminary final performance under the Player Focus microscope this week, breaking down his game quarter-by-quarter. >> Scouting Notes: SANFL U18s Preliminary Final

2021 SANFL U18s Preliminary Final | Woodville-West Torrens 13.15 (93) def. West Adelaide 9.8 (62) #26 Jordan Lukac (Woodville-West Torrens) Quarter-by-quarter: Q1 Starting up forward with fellow tall Zac Phillips taking up the primary ruck duties, Lukac was presented with very limited opportunities to showcase his craft in the opening term. West Adelaide was well on top, restricting the Eagles to just one forward 50 entry across the first 15 minutes. Lukac was eventually rotated into the ruck after 19 minutes but could not quite get his hands on the ball as Westies continued to surge ahead, ending up with a statless quarter – but not for a lack of effort from the skipper. Q2 After the Bloods’ period of superiority, it was time for Woodville-West Torrens to hit back in term two. Lukac played a solid part in the scoring swing, notching a goal and two behinds from his sole three kicks for the quarter. The bigman’s size and physicality drew extra attention from direct opponent, David Midwinter, who had the tough job of marking him one-out inside defensive 50. Lukac and the Eagles took toll. He drew a holding free kick while leading to the top of the arc, which lead to Jase Burgoyne’s first goal as the Port Adelaide father-son prospect took the advantage into an open goal. Protecting the drop zone well on long kicks in transition, Lukac snared his own score (a behind) from a 30m set shot, and later kicked his opening major after 17 minutes of play. He had the opportunity to add another from a similar spot but put the 45m set shot wide. Q3 Contributing an identical scoring output of 1.2 in term three, Lukac continued to help the Eagles soar to a defining lead on the back of a greater wealth of opportunities. While he missed two gettable free kick conversions, Lukac produced one of the day’s highlights with his second goal. Stationed behind the play outside attacking 50, Lukac marked and sensing a big moment, moved straight on with the ball. He carried it just past the arc and let fly with a booming shot on goal which carried through, with only about 90 seconds left in the term. The captain’s goal cliché is, well, exactly that, but Lukac’s goal helped lift his side heading into the final term. Three of his four touches resulted in scores, with the remainder an errant bomb kick which ended up out of bounds on the wing. Q4 Lukac’s finish to the game was indicative of his side’s efforts, as he added another three goals with surer conversion. The first came from a terrific juggled mark in deep a one-on-two contest, before Lukac turned and slammed the ball home with ease. He found a bit more space for his next mark and goal, before again being infringed in a marking contest en route to snaring his fifth and final major score. Lukac also showcased some deft ruck craft in the second half, hitting nicely to his accelerating rovers for a few clean clearances breaks which caught the eye. Closing thoughts… While he started slowly with limited opportunities, Lukac ended up having a big say on the result with nine of his 10 kicks resulting in scores. He eventually straightened up but could have claimed an even bigger haul if not for inaccuracy, as he constantly drew free kicks with defenders struggling to combat his size and strength. The Eagles played to his strengths by stationing him one-out inside 50, where he only needs a few looks to do some damage. He got better and more effective with his ruck craft as the game wore on too, making for a well-rounded and impactful overall effort from the rising tall.
Image Credit: Paul Kane/Getty Images
Login
Please login to comment
0 Comments
Inline Feedbacks
View all comments
Recent articles