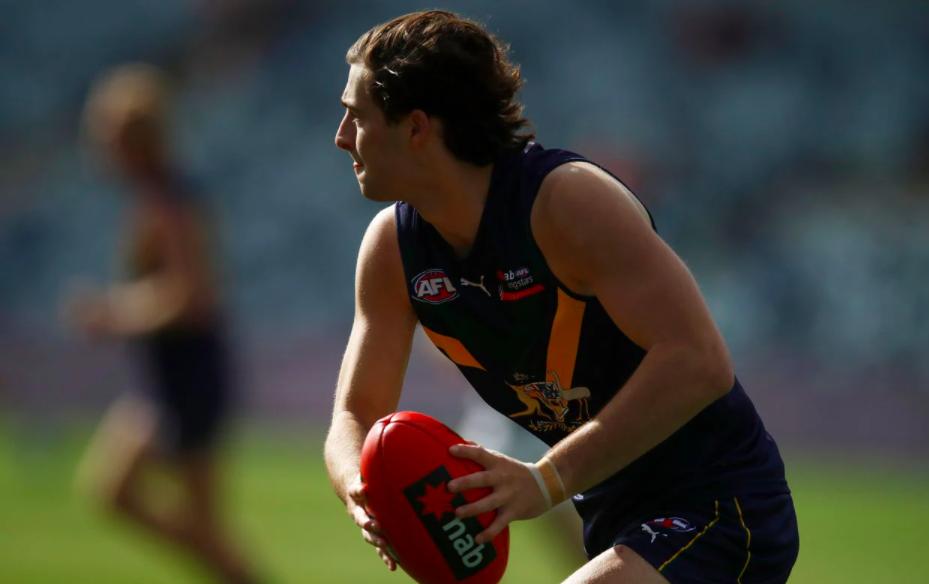 SNAPSHOT: “A clean and damaging player possessing the best two-sided kick in the draft pool, Sonsie is a stoppage specialist with slick hands and smarts who can also go forward and kick goals.”

Tyler Sonsie is a balanced midfielder able to win clearances in close, but also hurt the opposition on the outside with his clean and crisp skills. Proving he could match it against senior players with a 24 disposal and two goal game in his only VFL outing for Box Hill, he may be one of a few Victorian prospects to debut at AFL level next year. Likened by recruiters to Richmond champion Trent Cotchin, such a comparison is evident in his stoppage work; able to win first possession with quick anticipation and clean hands to set up midfield thrusts, but also every chance to go forward and kick goals on his right and left boot.

Sonsie’s rise to prominence started in the first Victorian Under 16 trial game back in 2019, where he was the name on many scouts' lips after putting in a dominant performance through the midfield. He would carry that form into the championships proper, winning Vic Metro’s Most Valuable Player (MVP) award in an undefeated carnival. Sonsie averaged 23 disposals at those championships and finished with a bang, kicking 4.3 to showcase his ability to hurt the opposition inside attacking 50. Sonsie’s ability forward of centre has been a key aspect to his game, kicking an incredible goal at MARS Stadium playing NAB League in 2019, and his two-goal games this year included performances against Calder Cannons and Tasmania Devils, as well in his one outing for Box Hill in the VFL.

At stoppages, Sonsie is dynamic in reading taps with good timing and quick thinking, hitting the ball at pace and doing so cleanly. There aren’t many players as clean as Sonsie at stoppages as he never fumbles and with good agility, can escape congestion and find targets by hand or foot to set up plenty of drive from the contest. With clean hands and that mix of composure and agility, Sonsie often gets maximum value out of his clearances which he has done in plenty of games this year - most significantly during his 34 disposal outing against Calder Cannons in Round 2.

Sonsie is arguably the most dual-sided player in the draft, capable of kicking competently on either foot. Combined with his agility and composure, he often creates more options for himself when he can fake to either side. Sonsie’s two ripping goals against Calder Cannons both came off his opposite foot and if there is a player in recent memory that could execute the same goals - 2001 Brownlow Medalist Jason Akermanis. Sonsie could even get close to that level he, is going to be a special player.

Consistency has been an issue for Sonsie this year despite only going under 20 disposals once, suffering an injury in that game. The consistency, or lack thereof, is not shown from his disposal numbers, but more so his four-quarter impact and willingness to get involved with or without the ball. That could partly come down to his gut running, which plenty of the best midfielders in the game have who are on the smaller side like Sonsie at 181cm.

Players like Ben Hobbs, Nick Daicos and Josh Ward work very hard without the ball and have plenty of repeat sprints in their game, whereas Sonsie can coast from time to time. If he can develop that running capacity without the ball, he could not only lift his disposal numbers to match those players, but also lift his impact as he is arguably a more damaging player with ball in hand to those three prospects.

At his best, Tyler Sonsie is a top five talent who is able to win the ball at stoppages to great effect while also going forward to kick multiple goals. We have seen his best at Under 16 level and a in couple of games this year - including against Calder Cannons in Round 2, and while playing for Box Hill in his only VFL outing. It’s the down games that could have him going lower than his talent would suggest. If Sonsie can bring his best every week, improve his strength and find that next gear to get to more contests around the ground with an improved fitness base, he will become an elite midfielder in the AFL.