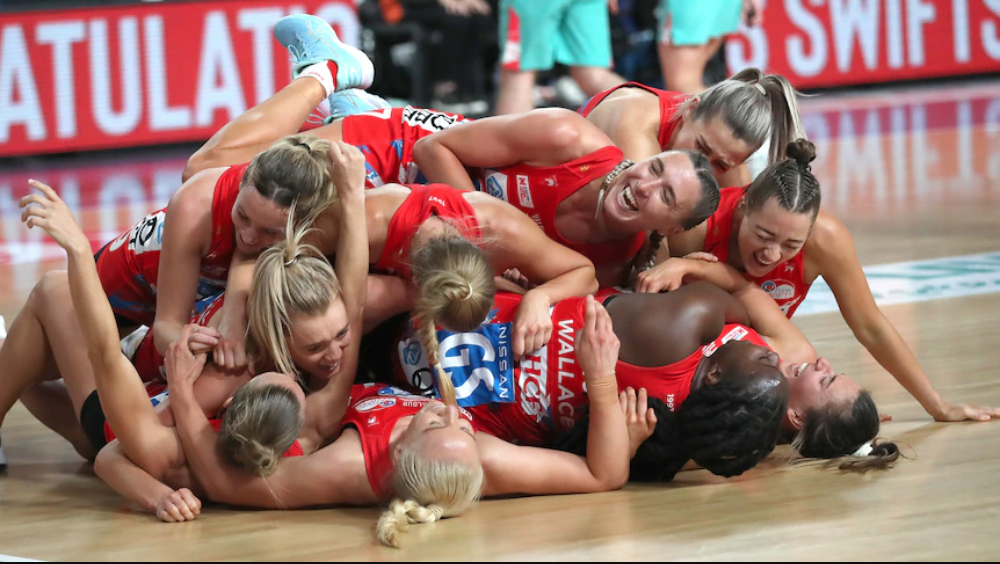 AAP / Jono Searle
THE biggest day on the national netball calendar has been won and done, with a huge Suncorp Super Netball grand final sparking plenty of excitement during lockdowns, while ANZ Premiership signings were completed and club Most Valuable Players were awarded. The 2021 Suncorp Super Netball premier was decided on Saturday afternoon, as the NSW Swifts burst out of the blocks to defy GIANTS Netball the crown and, in turn, earn their second SSN premiership trophy in three years. The Swifts controlled proceedings from the get-go through the accurate hands of Sam Wallace, and retained control despite the GIANTS’ late surge credit to Maddy Turner‘s smothering defensive workrate as the Swifts claimed the title with a 63-59 victory. Turner was awarded player of the match for her impressive effort negating Sophie Dwyer‘s every effort, while it was announced later that Maddy Proud played the full 60 minutes with a broken rib suffered in the preliminary final two weeks ago. “They were another level from the first whistle,” GIANTS captain Jo Harten said post-match. “We gave absolutely everything to claw back the deficit but it was one of those games where you never felt like you were on top.” The England international led her side fearlessly, but the GIANTS were outplayed by the Swifts’ wealth of options and threatening substitutes to use every player at their disposal to command control. “We had a lot of intent but they were pretty clinical… With so many threats available in a grand final it can be near impossible to decide where to focus your defence.” Harten was named the GIANTS’ Most Valuable Player (MVP) award for her excellent season, with Wallace, Jodi-Ann Ward (Collingwood Magpies) and Kate Moloney (Melbourne Vixens) all also awarded their club’s top honour. The Vixens also confirmed that head coach Simone McKinnis has signed on for another four years with the 2020 premiers, extending her current contract to the end of 2025. “I’m really excited to have signed with the Vixens for another four years, and look forward to what we can do in this next stage of the club,” McKinnis said. “This year has tested us a club, and I have no doubt we’ll use this to build something really special, and I’m looking forward to seeing what that looks like.” “The Vixens family is something I’m proud to be a part of, and I can’t imagine continuing my life in netball anywhere else.” Meanwhile, Australian Diamonds stalwart Caitlin Bassett has been ruled out of upcoming international tests against New Zealand Silver Ferns and England Roses with ongoing knee complaints suffered during the March Constellation Cup series and ANZ Premiership preseason with the Waikato Bay of Plenty Magic. “This season was particularly challenging as these injuries inhibited my ability to jump, hold and move like I normally would,” Bassett said in the Netball Australia press release. “I am disappointed not to be available for the upcoming Origin Australian Diamonds test matches, but this is what’s going to be best for my knees and I will turn my focus to the recovery and rehabilitation.” Bassett confirmed she will undergo surgery in her home state of Western Australia on social media, sparking interest about whether she is a chance to return to the West Coast Fever following recovery – the club she started her career at back in 2005 and spent 11 years with before becoming a Sunshine Coast Lightning foundation player in 2017. Heading across the ditch, and with maternity leave and injury keeping 2020-21 Silver Ferns co-captains Ameliaranne Ekenasio and Jane Watson from participating in the upcoming test matches against England and Australia, midcourter Gina Crampton has been named captain of the new-look New Zealand squad, with Sulu Fitzpatrick named vice-captain. While many expected the captaincy to be an interim role until Ekenasio and Watson are fit to return, New Zealand Silver Ferns head coach Dame Noeline Taurua made it clear that Crampton and Fitzpatrick were chosen despite the loss of the two figures, and not in spite of it. Ekenasio and Watson will remain in the leadership group despite sitting out of upcoming tests. “Gina and Sulu will take full ownership and accountability in their roles but will have that support from both Ameliaranne and Jane who are still part of the leadership group and very much involved with the operations of the team.” “She’s (Crampton) also not afraid to drive others as to what is expected and she upholds to the Silver Fern standards and values. Gina is a meticulous planner and her attention to detail is outstanding.” Crampton currently has 47 caps to her name following her debut in 2016 against the Australian Diamonds. She will be the 28th player to captain the side, explaining that it is a “huge honour” to be chosen to lead the Ferns. “Remembering all the great things that are happening with the Silver Ferns at the moment, it was actually easy to call Noels back a few days later and take up the huge honour,” Crampton said. “I feel so confident in everything that Noels does that I know we will always be steered in the right direction, while Sulu has shown recently with the Mystics just how great of a leader she is. Sulu is a massive voice in our team and I think we complement each other well.” The last of the ANZ Premiership signings have been confirmed, with first the announcement of Katrina Rore heading to the Waikato Bay of Plenty Magic, before that confirmation was followed by two Suncorp Super Netball delistings as the Central Pulse completed their list with GIANTS defender Kristiana Manu’a and Sunshine Coast Lightning attacker Binnian Hunt.

[…] Intriguingly, this announcement leaves the GIANTS without two of their premiership defenders, with goal defence Kristiana Manu’a heading across the ditch to play in the ANZ Premiership with Central Pulse. […]

Round Review 37 mins ago