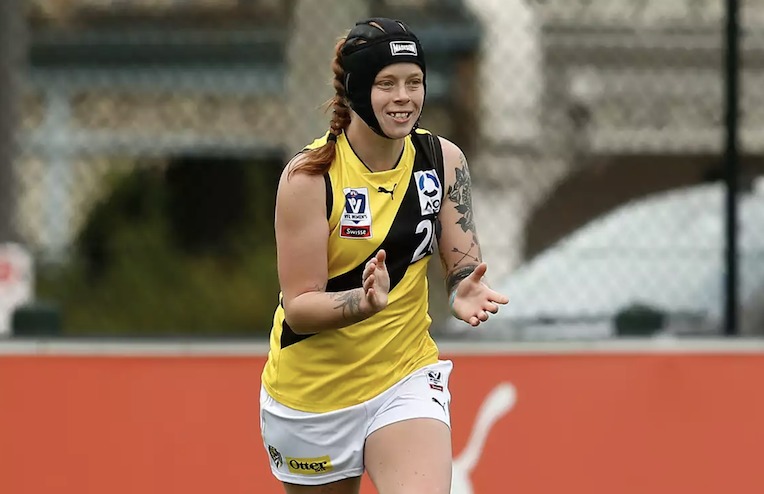 ROUND 1 of Victorian Football League Women’s (VFLW) commenced across the past two weekends, with five matches across three days of footy action all but setting the tone for the season to come. Carlton, Western Bulldogs and Williamstown had the bye this week, so will be rearing to go come Round 2.

It was a dominant performance from the Saints in the season opener, coming away 35 point winners against a struggling Magpies outfit. Despite all the momentum in their favour, the Saints were inaccurate inside 50 and missed opportunities to drag out the margin. Caitlin Greiser was the only multiple goalkicker, with two majors to her name, while Morgan Doherty was the sole goalkicker for the Pies. Collingwood’s Jaimee Lambert was the leading disposal winner for the match with 33 touches and six tackles, while the Magpies’ tackling pressure was solid with the likes of Katelyn Lee and Jasmine Ferguson racking up nine and seven alike. Despite the low scoring affair, the Magpies did a good job defensively to keep the Saints’ score down, showing some good composure as they controlled entries inside defensive 50 and piled on the pressure to deny space for marking contests. The Magpies will want to boost their opportunities forward in order to get a win on the board, with the defensive pressure of the Saints just too good.

A burst from the Demons in the final moments of the game gifted the side a win to start the season after trailing by 11 at the final change. Multiple goal hauls to two Melbourne AFL Women’s players – Maddy Guerin (three goals) and Bianca Jakobsson (two) – lead the way for the Demons, as they struggled to contain the likes of Monique DeMatteo, who kicked 3.1 in a solid outing for the Bombers. Casey’s Jakobsson and Essendon’s Georgia Nanscawen were among the leading ball winners, with 20 and 19 touches respectively, while Jakobsson’s nine marks and four tackles proved pivotal to the Demons’ success. The likes of Shae Audley and Courtney Ugle provided much needed tackling pressure, combining for 21 tackles as the Demons threatened to overrun the Bombers. Eden Zanker proved to be a solid option across the field for Casey, accumulating 24 hitouts, 12 touches and four marks.

A dominant performance from Tayla Stahl-Smith saw the Tigers blow the Falcons out of the water, with six goals alone almost equaling Darebin’s final tally. That being said, it was not all bad news for the Falcons as they shared around possession and showed they have options and versatility across the board. Seven individual goalkickers all but proves Darebin’s depth inside 50, giving the Falcons plenty of opportunity in front of the big sticks despite the defensive pressure of the Tigers. Jamie Stanton (19 disposal, four marks, four tackles) and Hannah Ibrahim (17 touches, two marks, six tackles) lead the way for their respective sides, putting pressure both on and off the ball with their respective ability to take control of possession. Both Shree Fairchild and Alana Woodward came away with 10 tackles to their name, however it was the backup provided by fellow Tigers teammates that kept the pressure on around the ground as Kodi Jacques and Shayla Marsh also came away with solid tackling numbers (nine and eight, respectively).

It was a slow start for both sides in this matchup, however a second half boost from the Thunder saw the interstate side take control from that point onwards and did not look back. Chelsea Randall (28 disposals, seven marks, four tackles), Ailish Considine (22 touches, two goals) and Angela Foley (20 disposals, one goal, six marks) were named in the best for the NT side, while the likes of Deni Varnhagen (18 touches, seven marks) and Jasmyn Hewitt (one goal, eight tackles) also made their mark on the game. For the Hawks, it took a full field defensive unit to stop the press of the Thunder’s attack, proving strong as they limited Thunder’s accuracy with the constant pressure inside defensive 50. Philippa Peschke and Meg Hutchins were among Hawthorn’s best with 22 and 21 disposals respectively, while Peschke also notched up five marks and five tackles. Also up there for the Hawks was Ebony Nixon, who finished with a solid 20 touches, six marks and five tackles. Jess Sibley was a good option inside 50, kicking an equal game-high two goals to keep her side in the match.

Melbourne Uni made their presence felt on the field winning comfortably against Geelong. It was a close start but as the game went on Melbourne Uni pushed ahead credit to their accuracy in front of goal and making the most of their opportunities with ball in hand. Geelong were unable to stop the Muggars who were crisp with ball in hand and flexed their muscles in the second term nailing four goals to one, to take a 24 point lead into the main break and did not look back. Jasmine Garner was prolific across the field picking up plenty of the ball with a game high 31 disposals. She also impacted the scoreboard nailing three goals to add to her impressive afternoon. Asha Price was a dead in eye in front of goal booting four goals for Melbourne University while Laura Amelung was also important in the forward half kicking two goals straight, showcasing their accuracy in front of goal. Jenna Bruton was a major ball winner for the Muggars who relished her hard-nosed attitude at the contest, amassing 22 touches and a goal while Kate Gillespie-Jones led the way in physicality with 10 tackles for the game. In a disappointing outing for Geelong, Rebecca Webster recorded the highest number of disposals with 20 touches, using the ball well to hit up teammates and create space. In the forward 50 Maddie Boyd was impressive, slotting two majors and securing a game high seven marks showcasing her strong hands in the contest.