Draft Central Team of the Week: AFLW U18 Championships – Round 2 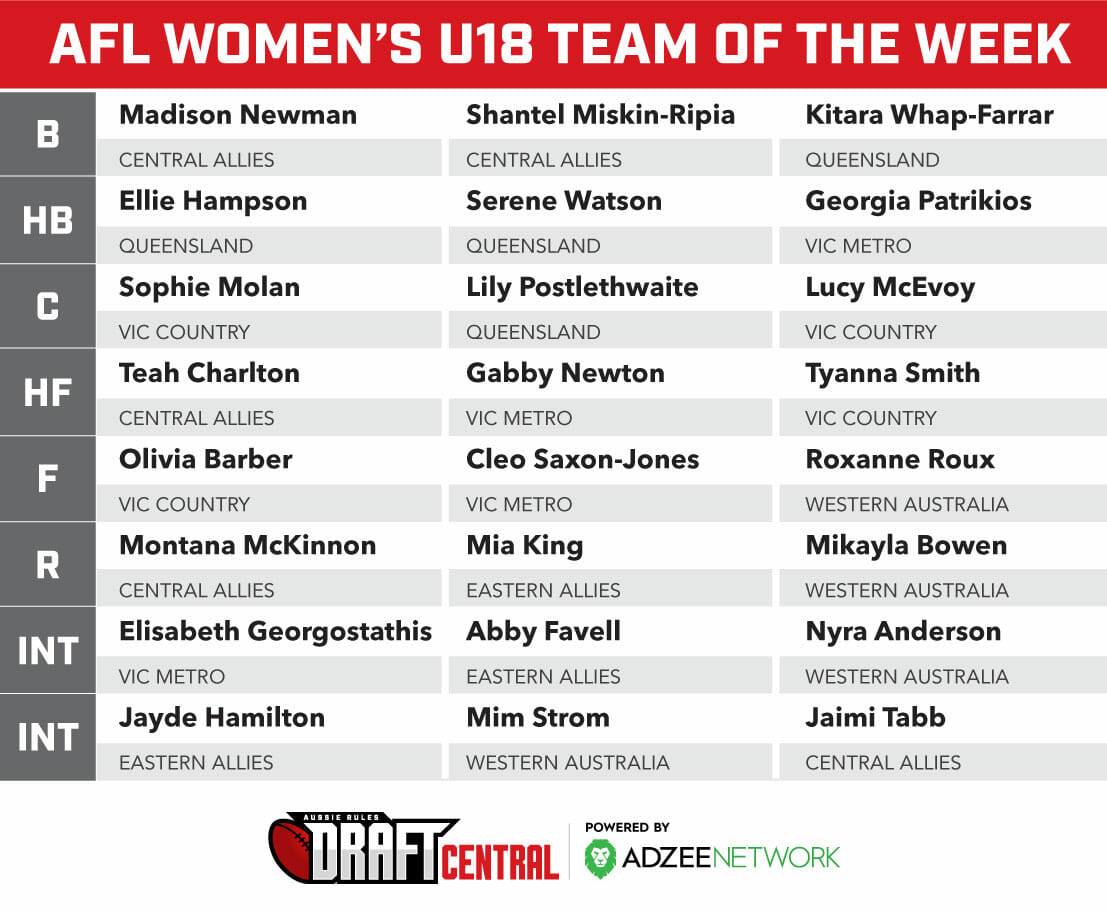 AFTER a massive week on the Gold Coast, we at Draft Central have named our Team of the Week for the AFL Women’s Under-18 Championships. For the exercise, the 24-player team does not include form from Round 1 (ie. prior to the Gold Coast matches) and only includes players who played all three matches, therefore a number of middle-agers such as Ellie McKenzie are ineligible having played just the two games as it is such a short tournament. Across the breakdown, Central Allies actually had the most individual standouts with five players named in our Team of the Week, followed by Vic Metro, Vic Country, Queensland and Western Australia all on four, and Eastern Allies on three after even team performances.

Madison Newman (CENTRAL ALLIES) – The rebounding defender had the equal second most rebounds at the carnival and averaged 15.3 disposals and 2.7 marks out of defence.
Shantel Miskin-Ripia (CENTRAL ALLIES) – The NT Thunder defender was far and away the most dominant rebounder, averaging almost seven per game, and was a crucial key in getting the ball out of defence when under siege against other opponents in tight games.
Kitara Whap-Farrar (QUEENSLAND) – Was an excitement machine with X-factor and one of a number of pre-listed AFL Women’s players who stepped up at the carnival, averaging 12.0 disposals and 2.7 tackles per game.

Ellie Hampson (QUEENSLAND) – The Queensland MVP was a huge ball winner for the home side and was deserving of the honour in a side that failed to win a game. The pre-listed Gold Coast SUNS player averaged 20.3 disposals, 4.0 marks, 4.3 tackles, 3.3 inside 50s and 2.0 rebounds.
Serene Watson (QUEENSLAND) – Another member of the impressive Queensland defence, Watson was crucial in getting the ball out of danger and still winning the footy. She dropped into the hole to intercept and rebound, averaging 14.7 disposals, 3.7 rebounds and 3.7 tackles.
Georgia Patrikios (VIC METRO) – Probably a little cheeky to have the winger here, but Patrikios averaged more than two rebounds per game on her way to having the equal sixth most of any player in the carnival. She played across all three thirds and also averaged 20.7 disposals, 2.3 marks and 5.0 tackles on her way to the overall MVP.

Sophie Molan (VIC COUNTRY) – The versatile utility was consistent across all three games for Vic Country, averaging 17.0 disposals, 5.7 tackles and 2.0 clearances and earned her spot on the wing in the side.
Lily Postlethwaite (QUEENSLAND) – Backed up her dominant carnival last year with another great effort as a top-ager this year. The Queensland captain averaged 16.0 disposals, 3.3 marks, 2.0 clearances, 2.0 inside 50s and 2.0 tackles.
Lucy McEvoy (VIC COUNTRY) – The Vic Country MVP and Geelong Falcons premiership skipper was a ray of consistency through good and bad, and was the biggest ball winner at the carnival, averaging 21.0 disposals, 3.3 clearances, 2.0 marks and 5.0 tackles whilst booting three goals.

Teah Charlton (CENTRAL ALLIES) – The middle-age forward looms as a top talent for next year after roaming up the ground and causing defensive half headaches for the opposition. She averaged a massive 7.0 tackles to go with her 14.3 disposals, 2.3 marks, 3.3 inside 50s and booted a goal.
Gabby Newton (VIC METRO) – A standout for the Metro side and no doubt a shade behind eventual MVP Georgia Patrikios, standing up in each of the three games with great consistency. Newton averaged 15.7 disposals, 4.0 marks, 4.0 tackles and 3.0 clearances.
Tyanna Smith (VIC COUNTRY) – Another player who is not eligible to be drafted until next year, Smith kept getting better as the championships rolled on, providing dash and hardness between the arcs. She averaged 16.0 disposals, 4.3 inside 50s – ranked equal first – and 6.3 tackles.

Olivia Barber (VIC COUNTRY) – Led the overall goalkicking for the week with five majors, proving to be a threat up forward. While the majority came in the opening match, Barber provided a great target in the air and at ground level and worked hard inside 50.
Cleo Saxon-Jones (VIC METRO) – Stepped up as a key target inside 50 for Metro and gave a chop out in the ruck, booting the three goals, but assisting in a number of others and providing a presence in attack.
Roxanne Roux (WESTERN AUSTRALIA) – The high-flying West Australian forward was dominant at her best and still looking dangerous when she was being held. Showed off her leap on the opening day chopping out in the ruck, and continued to present throughout the week with a high ceiling for improvement.

Montana McKinnon (CENTRAL ALLIES) – The captain and MVP was terrific in the ruck, but she earns the spot for her work around the ground. While Mim Strom had more hitouts, McKinnon took a number of strong grabs throughout the week at crucial times, averaging 11.7 disposals. 3.7 marks and 16.3 hitouts per game.
Mia King (EASTERN ALLIES) – The Tasmanian and vice-captain of the Eastern Allies was one of the most consistent players across the carnival using her burst and ability to do all the defensive things right. King averaged 5.3 clearances – ranked first – as well as 18.0 disposals, 6.7 tackles and 2.3 inside 50s.
Mikayla Bowen (WESTERN AUSTRALIA) – The West Australian leader and pre-listed West Coast player lived up to expectations with a sensational carnival, winning her state’s MVP. She averaged 8.0 tackles and 5.0 clearances per game – ranked second in both – as well as 17.7 disposals.

Nyra Anderson (WESTERN AUSTRALIA) – Underrated West Australian midfielder who finished the carnival with two big games, averaging 13.3 disposals, 4.0 clearances and 5.0 tackles.
Abby Favell (EASTERN ALLIES) – Murray Bushrangers’ middle-age midfielder who continued her ball-winning form to have an impact in the Eastern Allies’ midfield. She finished with 11.0 disposals, 2.7 marks and 2.7 tackles per game.
Elisabeth Georgostathis (VIC METRO) – Worked hard and stepped up in big moments for Vic Metro, having more impact than her 9.0 disposals per game might suggest, also laying 4.7 tackles and booting the match sealer against Queensland at Southport.
Jayde Hamilton (EASTERN ALLIES) – Another Eastern Allies midfielder who was fierce in her attack on the ball, laying 5.7 tackles per game to go with her 11.3 disposals, 3.3 clearances and 2.7 inside 50s per game.
Mim Strom (WESTERN AUSTRALIA) – The dominant ruck of the carnival who only misses out on the spot due to McKinnon’s dominance around the ground and her MVP achievement. Strom racked up 27.7 hitouts per game – 10 more than her nearest rival – as well as 9.3 disposals and 2.3 tackles.
Jaimi Tabb (CENTRAL ALLIES) – The number one tackler at the carnival, Tabb cracked in and won the hard ball whilst keeping opposition players looking over their shoulders. She laid 8.7 tackles per game to go with her 11.3 disposals. 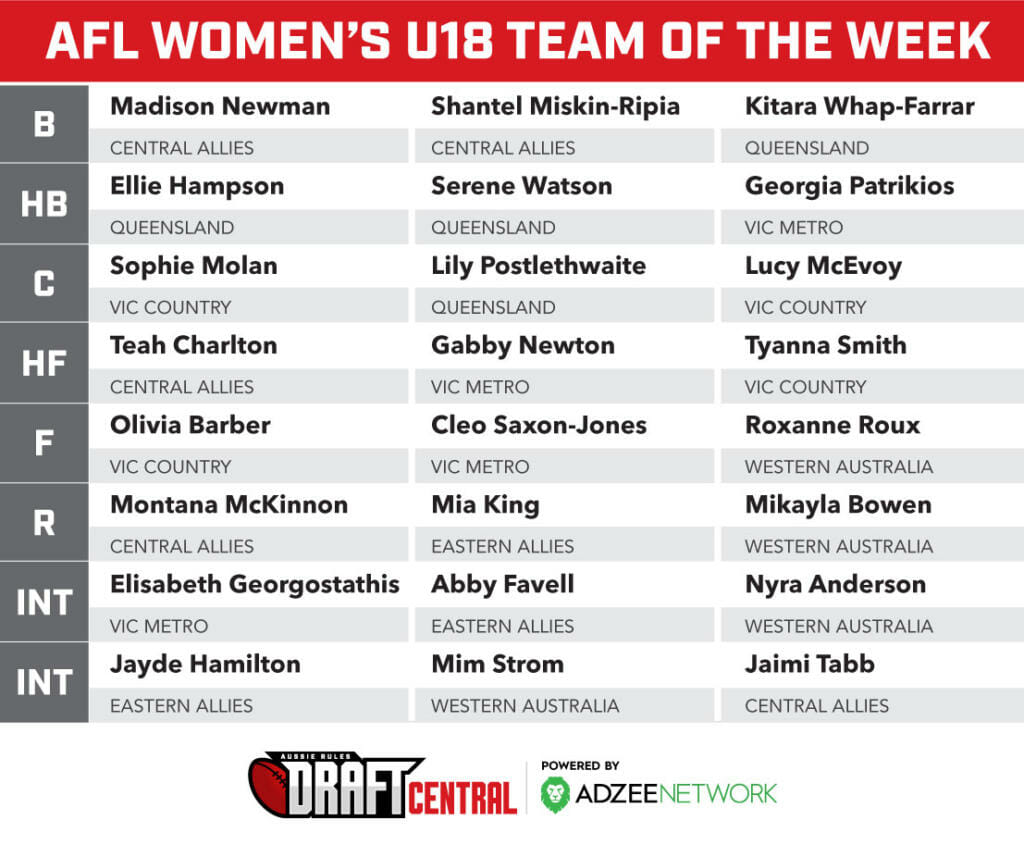