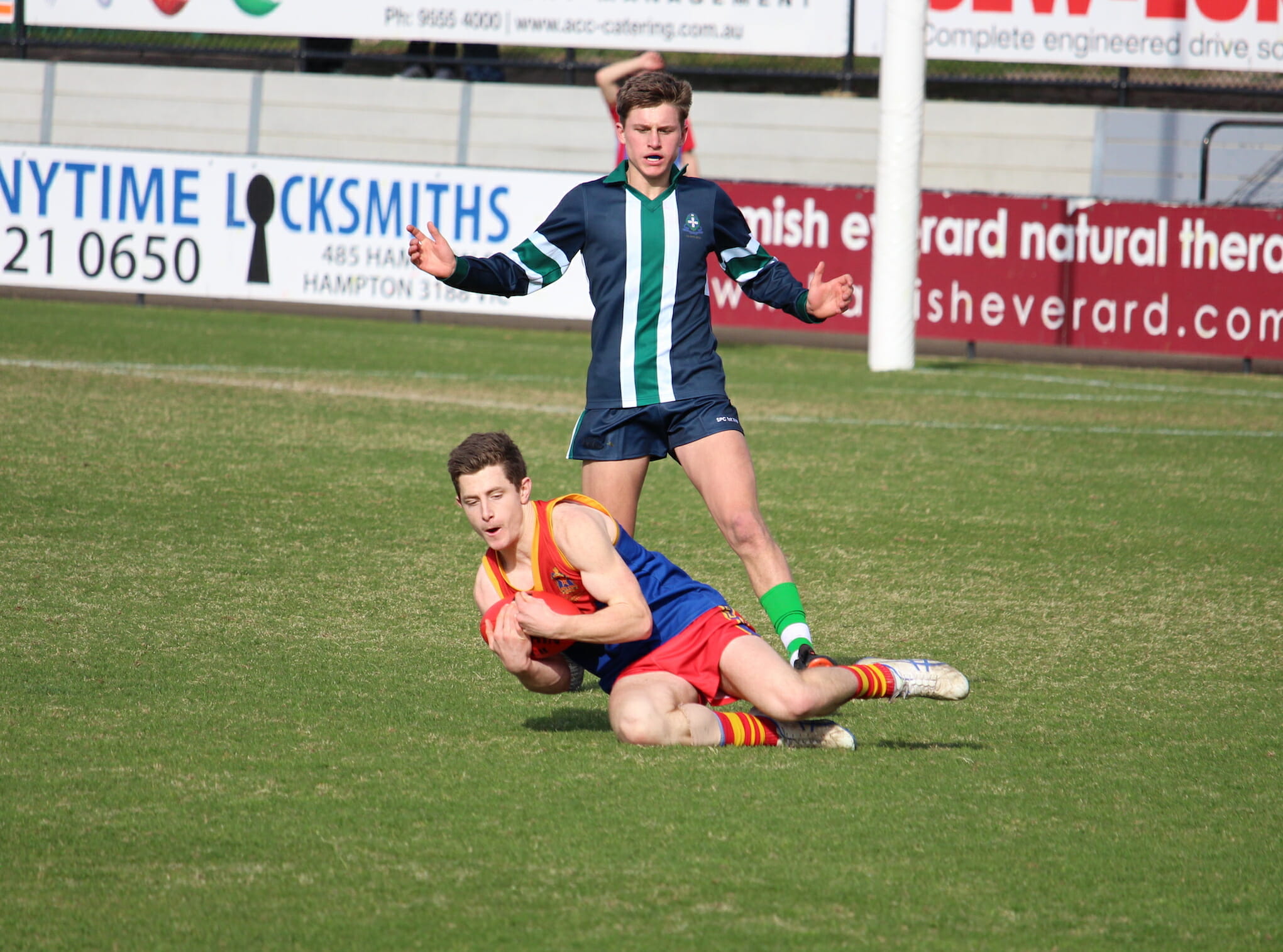 ST Bede’s College Mentone got the better of eight-time champions St Patrick’s Ballarat in the Herald Sun Shield grand final on Wednesday, and there was plenty of NAB League talent afield. We take a look at how some of the Sandringham Dragons and Greater Western Victoria (GWV) Rebels-listed players fared in the entertaining game.

Yorke was the main threat up forward, proving too big, strong, and smart around goal for his opponents. Started with a goal assist to George Grey for the first goal of the game, although the pass almost looked like an errand shot. He continued his dangerous form in the same term, covering the ground well to lay a ripping holding the ball tackle inside 50 and set up another chance for Grey. He would boot the first of his two goals in the following quarter with a great snap from the pocket shortly after spraying a more straightforward set shot out on the full. Yorke capped his day with what ended up being the sealing goal in the final term, slamming home another snap to help St Bede’s clinch the title.

The hard-working ball winner played a few different roles, but really came into his own late in the game with a permanent move into the midfield. Byrnes lifted when the game was on the line, prizing the ball at the stoppages and chaining handballs out to get some drive going, which proved vital as St Patrick’s pressed. The Dragons product did not seem to have massive numbers, but accumulated strongly across the day and made himself busy when planted on either wing or up forward.

Named best afield, the enigmatic Bergman had some of the most influential touches throughout the game. In arguably the passage that got him over the line for the best-on medal, Bergman stormed up the field to defensive 50 when St Bede’s were struggling to get it out, rising to take a strong overhead mark and relieve the pressure. His side would go on to kick the sealing goal shortly after, with Bergman’s touch of class a huge part in it. Earlier, he missed a couple of set shot chances in the third term which would have otherwise made it tough for St Patricks, as well as a snap under duress. The misses were surprising given Bergman’s textbook conversion in the second term, booting the first goal of that quarter. Overall an impactful outing, with his athleticism and vice-like hands on full show.

Grey was as dangerous as anyone in the front half, finding space both inside 50 and further afield at half-forward. He booted the first goal of the game with a straightforward set shot in the opening term, backing it up with a poster after receiving from Kyle Yorke a second time. Grey would go on to continue his influence around the forward arc, often booting inside 50 and causing headaches for defenders with his constant motion.

Had a really strong third quarter, continuing through the midfield after winning a couple of clearances there in the first half. O’Leary’s speed away from the contest and ability to find the ball around stoppages became a real factor, streaming forward at pace on a few occasions. His disposal on the end of those runs could have been sharper, but he managed to pull off a nice pass inside 50 to Miles Bergman late in the third term.

Played a bit of everywhere for St Bede’s, starting well in defence, spending some time in the ruck, and later moving forward. Courtney looked ominous in the air during the opening stages; starting with a big fist and clever one-on-one mark, while also laying a goal-saving tackle to prevent his opponent from converting into an open goal. While he faded out of the game slightly, Courtney continued to position well behind the ball and flew bravely in packs to impact each contest.

Craig-Peters was his usual combative self, trying hard all day through the midfield and willing his way out of congestion. A constant in the engine room, the top-ager’s ability to stay on the move and break tackles worked well with a couple of good stoppage moments coming late on; the first being a fast break forward after an Izaac Grant smother, and the second a duck under Miles Bergman’s flailing reach to find space to kick inside 50. Can sharpen up his use by foot at times, but is always solid and lifted when it mattered.

The GWV bottom-ager worked hard up the ground as he usually does, finding the ball forward of the wing and getting on his penetrating left side to deliver inside 50. His lead up work and strength for a smaller player were both features, with only Marris’ conversion the issue on this occasion. He had one set shot fade late and another touched on the line – both from range – while also seeing a snap go astray after roving nicely. Still, Marris was a great link in the chain and productive as ever.

The St Pat’s skipper was immense in the closing stages, doing everything he could to drag his side over the line. While he spent some time up the ground, Grant looked most at home in his time forward – with his good leap, strong hands, and smarts around goal all evident. He missed his first shot on goal after marking strongly in the first term, but made up for it in the following quarter with another solid mark drifting in from the side and the all-important conversion for St Pat’s first goal. He really did lift late-on with some work around the ball, but just needs to use his talent more consistently.

Polkinghorne was a productive member of the St Pat’s back six, working well to deliver the ball out of the back half. He had a particularly good start to the game, reading the play well on a couple of occasions to firstly spoil from behind and then take a sharp intercept mark from a St Bede’s ball across goal. He would go on to win one-on-ones when called upon, with one example against Blake O’Leary at half-back showcasing a good amount of composure.

Another talented player who falls just short in some moments, but put in a promising effort in this game. Lloyd started in defence where he would rack up possessions and do his best to move the ball out effectively, finding good range on his kicks. He showed some good poise when hemmed in, as well as having a nice run away from the stoppage early on. Moving up onto the wing, Lloyd was clean in congestion – which boded well for his goal at the end of the third term which he snapped out of just about nothing, keeping St Pat’s in the game. Was in the vicinity in potentially match-winning plays late on, but could not quite capitalise inside 50.

Another strong performer in the back half, Tillig had some good moments in the air despite not always pulling down marks. He started well with a strong leap into a pack and followed up with a composed juggling mark under some heat from his direct opponent. He went on to remain strong overhead around the ground, and put in some good spoils when he found himself matched against Kyle Yorke in defensive 50.

Round Review 13 hours ago