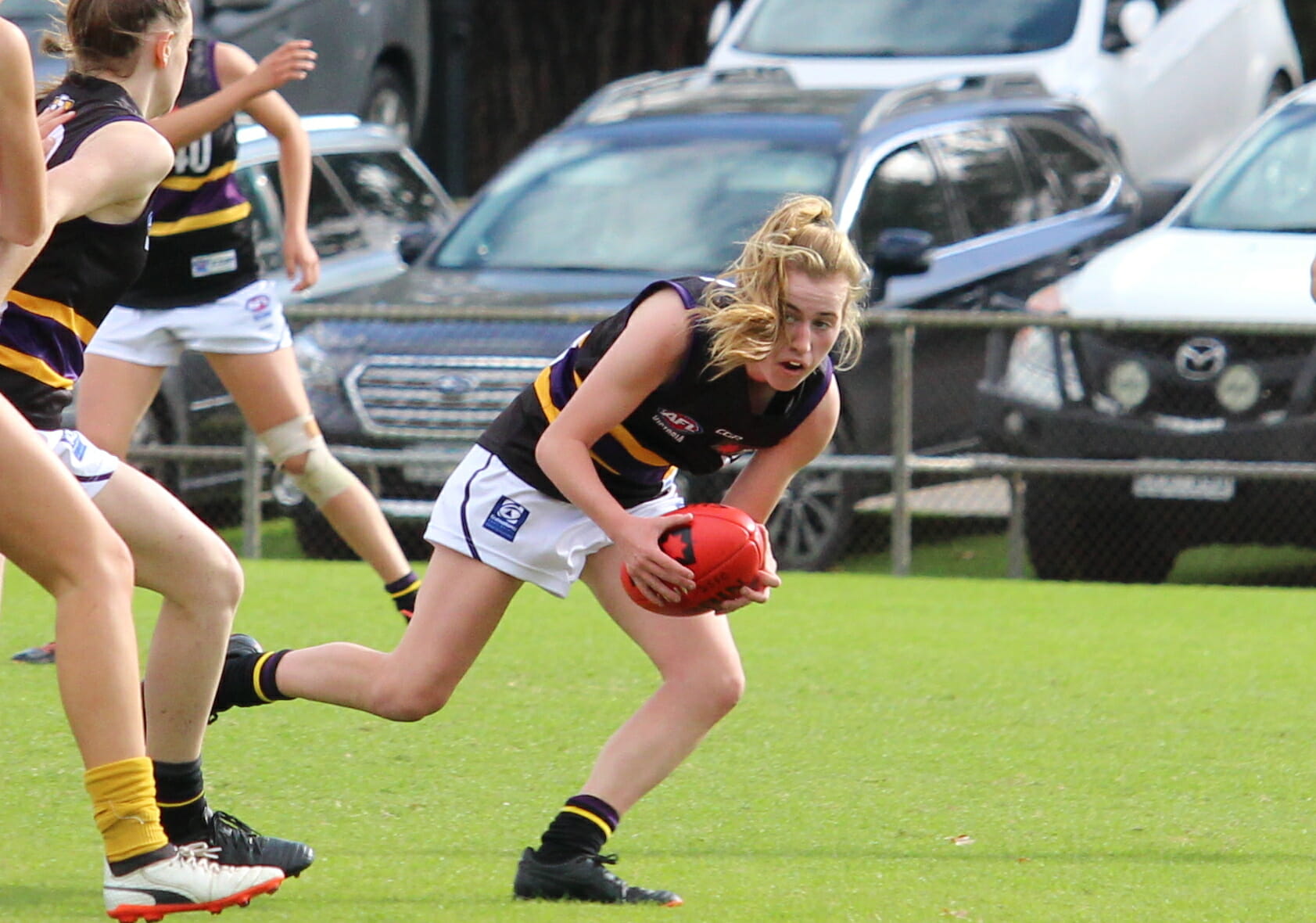 MURRAY Bushrangers Female Talent Coordinator, Briana Cossar has praised the efforts of her young back six in a frantic fourth quarter last weekend which saw the Bushrangers hold on to two points against a fast-finishing Western Jets outfit. While it was not the full four and a win, Cossar said had it not been for the efforts of the defence under pressure then the result surely would have only gone one way. In particular she highlighted Grace Hay as a star on the day for her work “repelling so many inside 50 attacks, we couldn’t believe it”.

“I think the Western Jets they threw absolutely everything at us, especially in that last quarter,” Cossar said. “Grace Hay was absolutely instrumental in the backline, she held us together pretty much. “If we didn’t have her and the likes of (India) Lehman and (Kristy) Whitehead, (Keeley) Skepper and (Mindy) Quade, it could have been an onslaught of a lot of goals I think. “Their inside 50s were quite high.”

The inside 50 count was in fact 36-16, with a large portion of the Jets fierce attacking coming in the final term where they came from seven points down at the final break to draw level with five minutes remaining. Despite also having the lion’s share of the disposals (246-180), the Jets could not get another score on the board after an important Caitlin Sargent goal at the nine and a half minute mark of the term. What made the feat even more impressive was the Bushrangers’ defence was primarily comprised of 16-year-olds (and 15 in Skepper’s case). Whilst credit must be given to the Bushrangers for their efforts in the final term, the work of the Jets to present with so many entries should also be praised.

More importantly for the Bushrangers, it was pleasing for Cossar and the rest of the coaching and development staff to see marked improvements from Round 1 where they suffered a 50-point loss to Oakleigh Chargers in Wangaratta.

“The Round 2 game on the weekend was really pleasing for all the coaching staff,” Cossar said. “Obviously compared to Round 1, the girls gelled a lot better, the forward structure was a lot more open which gave us a lot more room for players to present and provide an option, which is what we had worked on at training. “Also I just think across the ground everyone they knew their role so the coaches, there was two things that the coaches wanted on the weekend. “One was to bring intensity for four quarters which we did, and the other one was the awareness of locating your opponent which we probably lacked in Round 1. “We chased tail a lot, whereas on the weekend, we were first to the footy, we attacked the footy really well. “We had plenty of outside runners as well. I think everything sort of worked really well together as a team unit and hence the scoreboard.”

Despite coming away with two points, Cossar said it was still a work in progress to focus on positioning in midfield to try and stem the flow of inside 50s after conceding an average of 38 per game in the first two rounds.

“I think the position of our wings and midfield is really, really important. Because once it gets through the middle of the ground or off a half-forward flank, that ball gets to the middle and we’re not front and centre and we don’t attack the footy and it goes to the opposition then you’re chasing tail and it makes it really hard for our back six to then work tirelessly in defence to repel that ball out of defence and then give our midfielders another opportunity to push the ball forward. “Really pleasing after the weekend, a lot of things still to work on, and those types of things, but we actually put four quarters together. “We probably took our foot off the pedal a little bit in each of the quarters, but then we quickly regrouped and then had our mindset on our two focus points that the coaches asked of them so it was really pleasing.”

Cossar said the Bushrangers had been working on that area of their game and “tweaking” players in different positions, but with such a short season and limited interaction with the entire group during the season, it was difficult to go into finer details outside of the key focuses on conditioning and fundamental skills.

“You have a Christmas break, you’re back into training, you have a couple of practice matches and then all of a sudden it’s Round 1,” she said. “We don’t have a lot of time with the players and that’s one of the challenges we face as a country region, we only do see the players in preseason twice a week and then obviously in-season it’s just once a week. “The travel time is massive for some of our players, like a lot of them travel in excess of two, two and a half hours one way to training. “It’s a big challenge for us, but in saying that, Metro club face different challenges. “We all have different challenges, but for us, the travel time is a big one and fatigue we need to manage that too.”

The other challenge the Bushrangers had to address prior to Round 2 clash was the loss of Olivia Barber to concussion. A Vic Country representative at bottom-age level last year and a key target inside 50, the talented basketballer forced a rethink of the front six, which while it might have missed her presence in the air, gave other players a chance to step up. Cossar said while the club would love to have had her in the side, it actually provided them with a different looking forward line based around more speed than height.

“It also allowed us to open up the forward 50, because we have girls that are quite quick as well, so instead of having one target, we thought that we would have three or four that would present at the football to give our ball carriers a few more options and I think that, that works really well as well. In terms of structure I think we changed the structure a bit and it seemed to work well. Hopefully Liv will come back Round 4 and be another target up forward, but depending on the structure and how we go about that, whether we play her as a deep forward or play her as a high forward, we’ll obviously work that out.”

While some might come to the conclusion that having Barber in the side may have altered the drawn result, Cossar said the forward line structure worked more effectively than the first week so it may not have had the same impact. Either way, the Bushrangers coaching staff were pleased with the way the players had performed and Cossar was looking forward to having Barber back in the side who would only “bolster our opportunities at goal” for the Round 4 clash against Gippsland Power in a couple of weeks.

The Bushrangers earn a break this weekend with a scheduled bye, before heading down to Trevor Barker Oval to take on Gippsland Power on Saturday, March 21. Murray then takes on Bendigo at Deakin Reserve in Round 5, then Greater Western Victoria (GWV) Rebels at Epsom Huntly in Round 6. The players will be given a home program to do over the break to try and reduce the travel load ahead of the heavy schedule coming up.

Round Review 13 hours ago