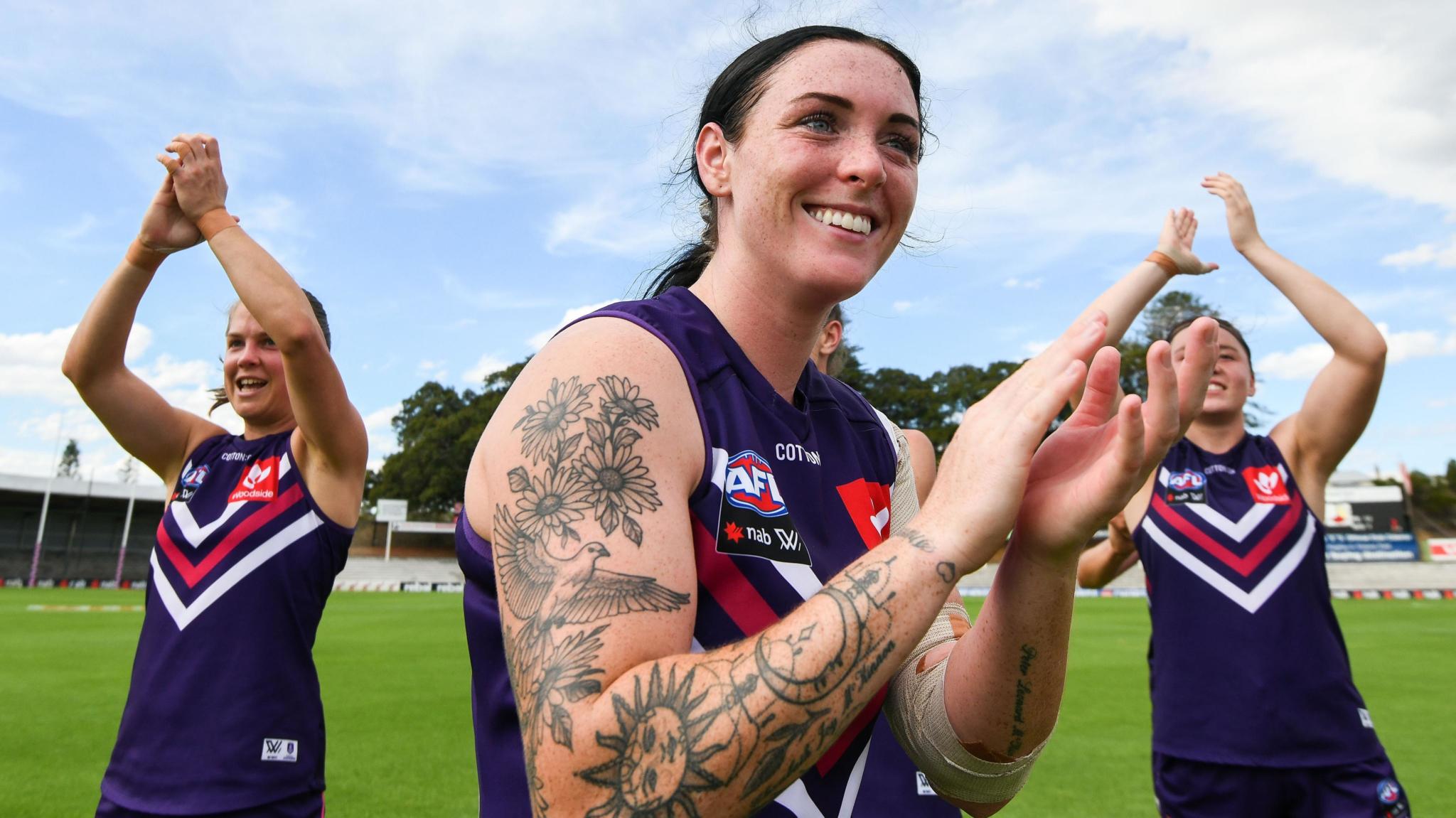 FREMANTLE, AUSTRALIA - MARCH 21: The Dockers (Sabreena Duffy) thank the support their staff during the 2020 AFLW Semi Final match between the Fremantle Dockers and the Gold Coast Suns at Fremantle Oval on March 21, 2020 in Fremantle, Australia. (Photo by Daniel Carson/AFL Photos via Getty Images)

IT was a mammoth effort from the ladder leaders in Fremantle that led to a phenomenal 70-point win over expansion side, Gold Coast Suns. While the Dockers were undefeated coming into this match and the Suns with only two wins to their name, little could have expected the final margin, with Fremantle far too good at home, winning 12.8 (80) to 1.4 (10). While Gold Coast struggled under Fremantle’s wrath, the home side was clinical and if it had hit more targets inside 50 the result could have been far worse.

A relatively even first quarter saw plenty of intensity with Gold Coast competing well without Fremantle’s crowd to deter the Suns from testing the Dockers early. While Fremantle headed into the second quarter eight points up, it was a solid defensive effort from the Suns that kept them on their toes and forcing hasty kicks on goal. But after the first the Dockers came out all guns blaring, not conceding a major for the rest of the match and denying the Suns any clean penetration of their forward 50, with the side only marking once from 26 inside 50s, a real credit to the defensive pressure and constant tackling effort from the Dockers, combining for 59 tackles compared to Gold Coast’s 33 – lead by Kiara Bowers who racked up 14 to go with her 22 touches. The first saw Sabreena Duffy’s first of three, with the talented goalsneak finding plenty of the footy thanks to her tenacity while her small stature and burst of speed made her hard to stop. Jacqui Yorston and Kate Surman were solid down the field finding plenty of the ball but falling short of options inside 50, with Fremantle’s defensive pressure creating a real buffer downfield.

A four-goal second quarter sparked a significant lead heading into half-time, with near misses giving the Suns some opportunities to get on the board but going scoreless after the second minute mark, with a frustrating miss 15m out from Tiarna Ernst in reward for a brave contest – who later left the field with symptoms of concussion – that could have well and truly changed the game if it had been converted. Gemma Houghton and Kate Flood (two goals apiece) opened their account in the second, joined by young gun Roxy Roux who returned to the side after a brief stint on the sidelines, taking a 27-point lead into the main break and sending an ominous message to the competition with another all-round effort in the forward half producing a dominant performance. Hayley Miller impressed with her tenacity in a great finish to her best season yet, with her consistency clear through the midfield, collecting 20 touches, seven marks and three tackles.

While Fremantle continued to go from strength to strength, the Suns would not give up, with the likes of Jade Pregelj consistent as ever in defence, collecting an equal season-high 16 touches and contributing well to force errant kicks on goal from the Dockers. Lauren Ahrens was equally solid off the half back, managing 17 disposals and three marks in a tough contest. An interesting battle waged between rucks with young gun Mim Strom providing vital footy to her mids, managing 14 hitouts, eight touches and two tackles, while Suns’ Lauren Bella led the hitout count with 17 but did not have the backup required to propel the footy downfield, with Fremantle taking much more advantage of the tap. Gabby O’Sullivan added a second goal to her tally in the third, while a crucial kick on goal late in the third from Jordann Hickey went unrewarded, seeing the margin extend further despite all efforts.

A four-goal final quarter haul from the home side saw Fremantle well and truly shake off any semi-finals worry, with the side enjoying the 70-point victory and plenty of standouts putting the win into practice. Fremantle’s four multiple goalkickers in Duffy (who now finishes ahead of St Kilda’s Caitlin Greiser as leading goalkicker in 2020), O’Sullivan (17 touches), Flood and Houghton allowed veterans the likes of Bowers, Ebony Antonio (20 disposals, eight marks, one goal) and Kara Antonio (19 disposals, seven marks) used their experience to provide plenty of footy up the field. Paige Parker was the sole goalkicker for the Suns on a tough day on the track, while Yorston and Surman both enjoyed impressive stats to finish their respective inaugural seasons, racking up 22 and 20 touches and combining for seven tackles. Dangerous forward Kalinda Howarth was unable to have her usual impact on the scoreboard, with the small forward working up the ground with Jamie Stanton, who also was rendered far less impactful than her typical work rate thanks to Fremantle’s constant pressure.