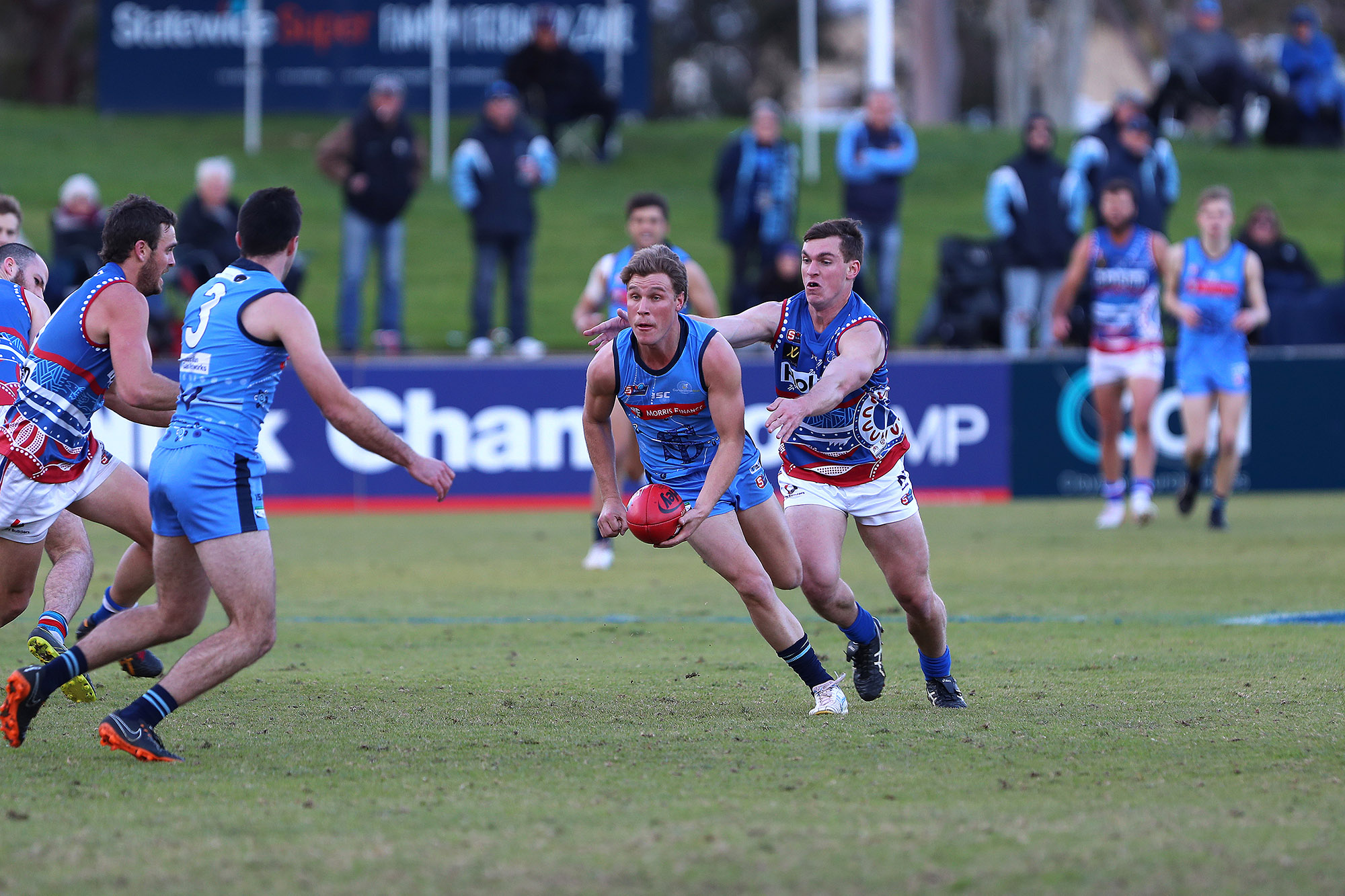 AFTER weeks of delay due to the COVID-19 pandemic, the season 2020 of the SANFL Statewide Super League will officially kick-off proceedings on Saturday. With Port Adelaide and Adelaide unable to compete, the league’s eight remaining clubs will play rounds one and two in the form of double-headers at the Adelaide Oval, across two weekends. Further fixtures are set to be released at a later date.

Central District will be eager to unveil prized-recruit Daniel Menzel when the Bulldogs lock horns with the Double Blues on Saturday afternoon. Sturt were victorious in both encounters between the two-clubs last season but bid farewell to a continent of premiership players in the off-season. Former AFL-listed trio Abe Davis, Aidyn Johnson and Dean Gore were recruited to bolster the clubs forward and midfield stocks. Centrals finished eighth in 2019 for the second-consecutive season, despite having won three of their final five matches, whilst Sturt reached another SANFL finals series but exited following an elimination final defeat at the hands of Norwood.

As is so often the case, the midfield will likely be where this game is won. Sturt has built a formidable on-ball unit, led by the prolific Sam Colquhoun, brilliant Zane Kirkwood, skipper and clearance king James Battersby and former Cat-turned-Crow Gore. For the ‘Dogs, Travis and Jarrod Schiller, will again be heavily relied upon in the engine-room, having finished second and seventh for disposals last season, respectively. The brothers were prolific, consistent and as industrial as ever in the midfield last season and will again be expected to do much of the heavy lifting, alongside retuning premiership-winning on-baller James Boyd.

Clean-kicking captain Luke Habel, the reliable Justin Hoskin and former-skipper Trent Goodrem will also be integral to their sides success in 2020. The Central District backline will be kept busy attempting to contain lively forwards Josh Hone and Mark Evans, who booted 32 and 30 goals last season, respectively. Meanwhile, with key defensive duo Jack Stephens and Fraser Evans announcing their retirements, the Double Blues will usher-in a new era in the backline, but may have their work cut-out for them by the potent Menzel-brothers.

Central District and Sturt will do battle in the reserves competition at X-Convenience Oval on Sunday. The Bulldogs seconds managed nine wins last season to finish fourth and will benefit from a number of new signings, whilst Sturt were one of the leagues best, finishing the year with 12 wins. Draft hopefuls Corey Durdin (Central District) and James Borlase (Sturt) may feature for their respective clubs at reserves level. Later that afternoon, the under-18s will face-off. Both underage-sides struggled last season, with Centrals finishing last and Sturt seventh. Look out for Bulldogs small forward Isaiah Dudley and midfielder Lachlan Grubb and, for Sturt, on-ballers Mani Liddy and Tom Powell.

In the second game of a Saturday double-header, Woodville-West Torrens take on South Adelaide. Both sides narrowly missed out on finals berths last season, with the Eagles loosing four of their final five matches and South pondering what could have been after recording a pair of draws earlier on in the year. The Eagles claimed victory over the Panthers twice in 2019, by 42-points in round 8 and 3-points later in round 13. But South likely enter this clash as favourites, despite losing star Abe Davis to Sturt.

The Panthers recruited well in the off-season, signing long-kicking, former-Power half-backman Matthew Broadbent and promising midfielder James Rose from Sydney. However Rose will not take part in the Statewide Super League season. Although the Eagles didn’t land a big-name recruit, their depth will be bolstered by the return of hard-running wingman Kai Pudney and signing of Rhyan Mansell from North Launceston.

South co-captains Joel Cross and Matthew Rose are amongst the leagues best on-ballers and will go head-to-head with former-AFL listed midfielders Jordan Foote and Jesse Lonergan. Foote, in-particular, has emerged as arguably Woodville-West Torrens most valuable player after winning the best and fairest award in 2019. He averaged 24.7 disposals (at 84% efficiency), 4.6 marks and 6 tackles. The Panthers defensive unit, led by Broadbent and Joseph Haines must nullify the impact of dangerous tall-forward Jack Hayes and lively small James Rowe, who combined to boot 60 goals in 2019.

The two clubs will face each other in the under-18s on late Sunday morning at Maughan Thiem Kia Oval, with the reserves to follow in the afternoon. The Eagles and Panthers have been two of the best sides in the underage competition previous years and their round one encounter is likely to be a close-one, with both sides featuring potential draftees, including South’s Zac Dumesny, Nick Kraemer and bottom-agers Jason Horne and Matthew Roberts. Taj Schofield, Henry Smith and Lachlan Jones are likely types from the Eagles.

‘Westies’ and the Roosters will kick-off proceedings on Sunday, with both sides undoubtedly eager to bounce-back after disappointing 2019 campaigns. Having been forced to start last season with -4 premiership points, North Adelaide will be grateful to commence the new season on a level playing-field under recently-appointed senior coach Jacob Surjan. The Bloods ended the season on the bottom of the ladder but will no-doubt be eyeing off a scalp first up, having defeated the Roosters by two-points in round 13 last season for one of their only two victories.

West bid farewell to loyal veterans Chris Schmidt and Jono Beech but gained Sam Davidson and Jordon Boyle in the off-season. The Roosters were exceptionally busy in the signing-department, landing former-Hawk Billy Hartung, tough on-baller Andrew Moore, classy backman Harrison Wigg and regaining small forwards Robbie Young and Kym LeBois from St.Kilda and Carlton. Alongside their flashy recruits, Tom Schwarz, Jarrod Almond and co. are expected to get the red and white over this line in this encounter, but battle-hardened Bloods midfielders Tom Keough and Kaine Stevens will do their best to inspire West.

The league and under-18 sides from North Adelaide and West Adelaide will meet on Saturday at Prospect Oval. Like their respective league sides, the Roosters and Bloods reserves struggled last season, finishing in the bottom-two spots. However, North Adelaide, in particular, will be hoping an increase in depth via strong recruiting can lift them to the heights of 2018.

West’s under 18s side was strong last season, recording 12 wins but failed to make the grand final. Watch for medium-forward Jye Sinderberry and wingman Bailey Chamberlain for the Bloods. Under-16s skipper Tyson Coe may also break-through for an under-18s game after the competition was cancelled for the year. Jamison Murphy and Tariek Newchurch are likely to feature prominently for the Roosters at either level.

In what has been marketed as the game of the round, reigning premiers Glenelg face Norwood to close-out the opening weekend. Both sides are tipped to feature prominently come the pointy-end of the season. The clubs split their two contests in 2019, with Norwood claiming a narrow five-point victory in round one before Glenelg earned-back bragging rights with a dominant 46-point win in round 13. This match is brimming with talent across all zones of the ground, after both clubs added further to their talent in the off-season. In the heart of the midfield, reigning Magarey Medallist Luke Partington will be joined by tough-duo Jonty Scharenberg and Matthew Snook, classy wingman Marlon Motlop and recruits Billy Stretch and Jackson Edwards.

In attack, Glenelg will be looking to lace-out Ken Farmer medalist Liam McBean, x-factor medium-forward Luke Reynolds and newcomer Matthew Allen, whilst Peter Bampton and Dom Barry will again be the focal points in attack for the Redlegs. Captain Max Proud is set to anchor the Bays defence once-again, whilst Norwood look to cover the departures of retired defenders Jace Bode and Alex Georgiou.

The Redlegs ended a 21-year drought when they defeated Woodville-West Torrens to claim the 2019 Reserves premiership. They should be around mark again whilst the Tigers will be looking to improve upon a fifth-placed finish. The clubs face each other in the lower grades on Saturday at ACH Group Stadium. Glenelg’s Lewis Rayson and Cooper Horsnell are ones to watch at under-18s level, along with Norwood’s Henry Nelligan, Ned Carey and Cooper Murley.