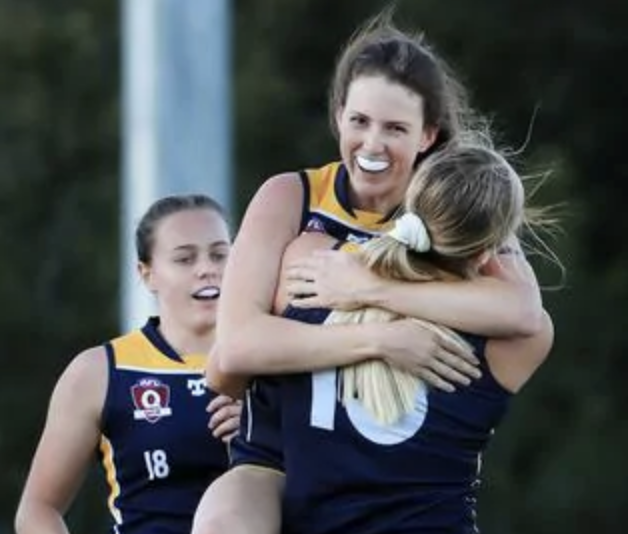 BOND University has enjoyed a strong 65-point victory over Wilston Grange in Round 9 of the Queensland Australian Football League (QAFL) Women’s competition to take outright top spot on the ladder. The Sharkettes booted the first eight goals of the game to run away 11.13 (79) to 2.2 (14) victors, with Taylor Smith and Casidhe Simmons booting the final five goals for the winners, with the Gorillas kicking some consolation majors in the final term.

Smith finished the match with four majors for the day, with Simmons’ two in the final term making her a multiple goalkicker, while the likes of Serene Watson, Kalinda Howarth, Annise Bradfield, Maddison Levi and Shannon Danckert all hit the scoreboard in the big win. Aside from an inaccurate second term – where the home team booted 1.5 – Bond University had control of the match the whole way through against their bottom two opponents, with the likes of Lucinda Pullar and Lauren Bella named among he best. Charlotte Taylor and Sarah Fuller booted the two last quarter goals for the visiting side, as Rheanne Lugg and Kaitlyn Day stood out from a Gorillas perspective.

Hot on the heels of the Sharkettes is Coorparoo who moved up to second spot on the table with another impressive win led by AFL Women’s star, Jamie Stanton. The Kings were held scoreless in the opening term by a red-hot Bluebirds outfit, but then piled on five goals to three in the second for the visitors to hit the front by eight points at half-time. Coorparoo extended the lead to 11 by the final break, and then manage to hold off the Bluebirds by that margin at the final siren.

Stanton booted three goals in a best on ground performances alongside Chelsea Chesterfield who also snagged three majors in the win. Jade Ellenger and Ally Anderson were among the AFL Women’s talents who shone, while Kate Surman and Sally Riley stood up for the losing side. Surman was one of two multiple goalkickers for the Bluebirds as Leah Kaslar also snagged a couple of majors.

University of Queensland grabbed an all-important four points to hold onto sixth spot on the ladder and gain some separation in the lowest finals position with a narrow four-point win over Aspley Hornets. The Hornets came agonisingly close to their first victory thanks to two goals from Lauren Kreis, while Holly Monaghan, Morgan Lanigan and Phoebe Baird all stood out for the home team. Lauren Middleton was one of two goalkickers and amongst the best, while Sophie Ure booted the other major. Sara-Jane O’Grady and Jane Childes also impressed in the win.

In the final result of the four games, Yeronga South Brisbane had a 16-point triumph over Maroochydore on the road with a strong second half. The Devils booted five goals to one after quarter time, coming from seven and one-point down at the first and second breaks respectively, before securing a 6.5 (41) to 3.7 (25) win. Courtney McDonnell booted two goals in the win, whilst Jacqui Yorston, Lauren Arnell, Lexia Edwards and Courteney Bromage all booted a goal and were named among the Devils’ best. Shannon Campbell (two goals) and Ashleigh Hales (one) were the goalkickers for the Roos, while Maggie Harmer, Chloe Gregory and Bella Smith‘s strong 2020 season form continued despite the defeat.