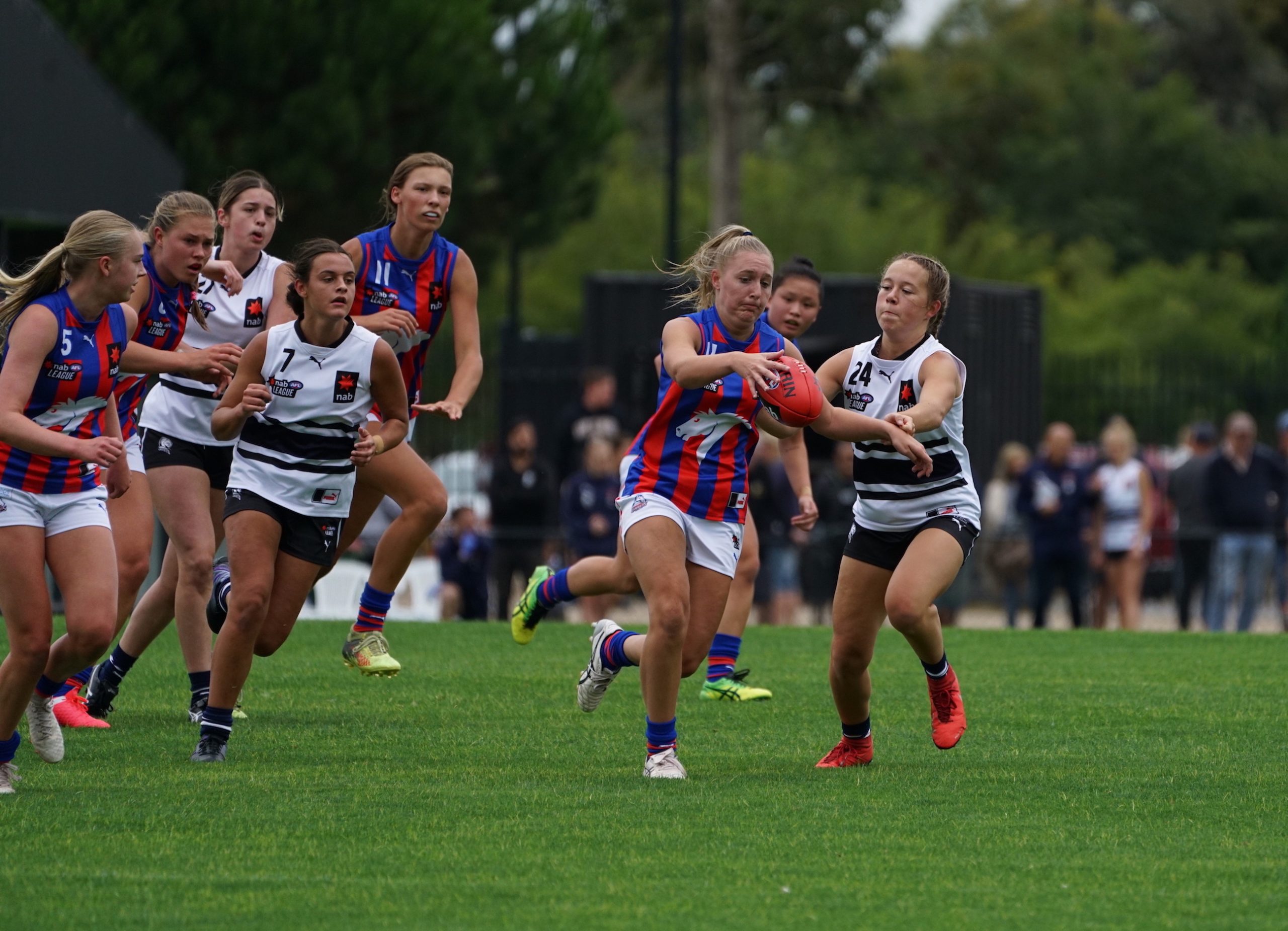 THE 2021 NAB League Girls season bounced down on the weekend, with a couple of surprise results thrown into a mixed bag of margins across the action-packed set of fixtures. Among the highlights, Tasmania Devils picked up its first-ever win in the competition, while Geelong won out in a thriller against the Greater Western Victoria Rebels, and Oakleigh became the first team to beat reigning premier, Northern since 2018. All that, and more in our Round 1 wrap. >> ROUND 1: SIX MEMORABLE MOMENTS

Final term breakthroughs helped Eastern defeat the Western Jets by 21 points at Kilsyth Recreation Reserve on Saturday, making for a tense start to the 2021 NAB League Girls season. The Ranges snuck ahead by seven points at the first break and saw their margin remain identical at the end of the second and third periods, as the two sides combined to add just six behinds in that time. But come term four the stalemate was broken, with Alyssia Pisano and Scarlett Potter working to double Eastern’s previous goal tally and help their side salute 4.6 (30) to 1.3 (9). Potter finished as the game’s sole multiple goalkicker with two, while Jemima Woods was the only Jet to find the big sticks before they were kept goalless across the final three quarters. Bridget Deed was Eastern’s most prolific ball winner, leading a hard-working bunch of contributors which included the likes of Mia Busch from defence and Olivia Meagher in midfield. Western’s Charlotte Baskaran collected a game-high 28 disposals (23 kicks) as arguably the best player afield, with tall Krystal Russell another top performer in the losing effort. Eastern’s next fixture entails a road trip to face Gippsland in Churchill, while Western’s travel sees it cross Bass Strait to take on Round 1 winners Tasmania on the Apple Isle.

Bendigo Pioneers have kick-started their season in a huge way, defeating Murray Bushrangers by 26 points at Yarrawonga on Saturday. The Pioneers piled on six consecutive goals after Murray scored the first major, including four goals in the space of 12 minutes to blow the margin out from six points to 28 points early in the third term. From there it was always going to be catch-up football for the home team, as Murray kicked the next two goals, but a last quarter settler for the Pioneers saw them get up 7.7 (49) to 3.5 (23). Elizabeth Snell and Jayda Richardson both kicked back-to-back goals, kicking the four consecutive goals in 12 minutes between them to haul their team into a commanding position. They were the standouts for the winners, while Lila Keck also impressed. AFL Women’s Academy member Tara Slender was able to test herself in the front half of the ground and did well, as did Madeline Marks through the ruck. For the Bushrangers, Aurora Smith had a ripping game despite the loss, while the likes of Grace Hay out of defence, and Molly Kennedy and Lily Sharp around the ground tried hard throughout the match. In a country double-header, Bendigo Pioneers host GWV Rebels at Epsom Huntly, followed by Murray Bushrangers locking horns with Geelong Falcons in the second game at the ground.

In a statement to the rest of the competition, the Tasmania Devils showed they were no longer the newcomers to be underestimated, as they ran out 62-point winners over Gippsland Power at Highgate Recreation Reserve. The Devils took control early thanks to two first quarter goals from Amy Prokopiec, and they never looked back. With the exception of a perfectly timed set shot from Grace McRae late in the first term, the Devils always looked in control, piling on seven goals to zero after quarter time to win 10.11 (71) to 1.3 (9).

Prokopiec finished the match as the dominant forward with four majors, while Amy Bissett (two) and Claire Ransom (one) also caught the eye, as Perri King provided dash and skill through midfield. For the Power, McCrae was the standout, while Matilda Van Berkel did well stepping up into the ruck after Grace Matser went down through injury, while the likes of Sunday Brisbane and Holly Booth never stopped trying in the back 50.

Next week Gippsland Power host Eastern Ranges at Churchill, while the Devils head back home to Twins Oval where they will welcome the Western Jets.

Fans who headed to Deakin University in Waurn Ponds were treated to a high-quality game of NAB League Girls action. Geelong Falcons and GWV Rebels went toe-for-toe for the most part of four quarters, with defensive pressure and contested marking the highlights throughout the game. Leading at quarter time, the Falcons took the early ascendancy, before the Rebels hit back to snatch the lead at the main break. Renee Tierney was becoming a problem in front of goal in the third term, booting her side’s two majors as the home team once again grabbed the lead. The Rebels pushed hard to try and edge their way back into the contest, but a match-winning final term goal from Poppy Schaap ended the contest and the Falcons got up, 5.8 (38) to 4.4 (28).

Both teams had an array of impressive performers, with Tess Craven and Annie Lee being the two standouts for the Falcons, whilst Chloe Leonard and Molly Walton were among those who worked hard in the back 50 to drive the ball clear. Both the Rebels AFL Women’s Academy players in Ella Friend and Nyakoat Dojiok showed their talent in the air and on the run respectively, while Schapp, Gabbi Featherston and Ingrid Houtsma showed plenty of potential throughout.

Both Geelong Falcons and GWV Rebels head up to Epsom Huntly in Bendigo next week, as the Rebels face the Bendigo Pioneers in the first match of a double-header, followed by the Falcons taking on the Murray Bushrangers.

Considered a premiere team of the competition, the Calder Cannons proved that people are right to see them as potential flag winners in season 2021 with a 16-point win over a strong Sandringham Dragons outfit at Highgate Recreation Reserve. The game was tight early on with first quarter being a contested scrap and each team only managing to hit the scoreboard for one point each. Georgie Prespakis and Bridie Hipwell were involved in everything in the first half, each setting up their respective teams’ first goal in the second quarter. The second half saw Calder sneak away with a four-goal third quarter, leading to the 6.4 (40) to 3.6 (24) victory.

Prespakis played well in the middle all game, assisted by teammate Emelia Yassir around the ground as the midfield duo was served well by the ruck dominance of tall duo Tahlia Gillard and Peppa Poultney. The latter pair rotated forward and through the ruck, with Gillard getting herself a goal later in the game. Chloe Saultry was strong in the midfield for Sandringham, as was Hipwell prior to going down early in the third quarter with what appeared to be an ankle injury. Kitty Smyth battled hard in the ruck all day, not looking out of place despite the height difference between her and her opponents, and Pia Staltari was classy coming out of defence.

Round 2 sees the Calder Cannons come up against Northern Knights at La Trobe University, whilst Sandringham will play Dandenong after the Stingrays’ Round 1 bye, at Frankston Park

Oakleigh Chargers handed the Northern Knights their first loss since 2018 in a perfect performance to kick off 2021, defeating the reigning premiers by 55 points at Highgate Recreation Reserve. In a complete team performance, the Chargers kept the Knights scoreless for three quarters, with a solitary goal and behind in third term serving as their only scores. The Chargers flexed their muscle throughout the game to finish 1.1 (7) to 9.8 (62) winners.

Charlie Rowbottom was best afield, involved in plenty through midfield and providing similar presence up forward with two terrific goals. Stella Reid proved Oakleigh’s other standout after also booting two goals, while also causing plenty of headaches for Northern along the wing and off half-back. Opportunist forward Ameille Smith also chimed in to impact the scoreboard, while the likes of Brooke Vickers, Amanda Ling, Taylah Morton, and Eliza James were strong contributors. For Northern, Tarrah Delgado stood tall in defence, aided by the rotating Maeve Chaplin as Maykayla Appleby burst forward from the outer and Brooke Plummer worked hard.

The Chargers have a bye next week after their win, with their next game coming against Calder Cannons on Saturday February 20, at Highgate Recreation Reserve, while the Knights will face the Calder Cannons in Round 2 at La Trobe University