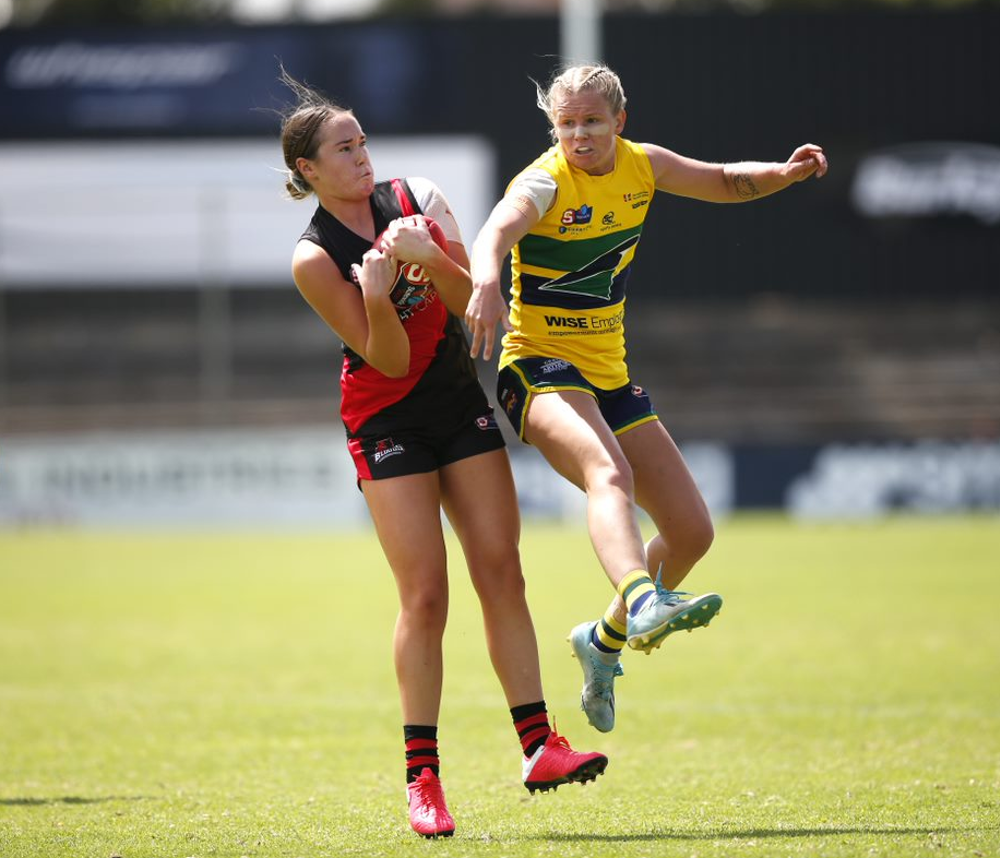 NORTH Adelaide and West Adelaide are the only undefeated teams after the first two rounds of South Australian National Football League (SANFL) Women’s action, while Norwood and Sturt grabbed wins to leave South Adelaide and Woodville-West Torrens Eagles as the winless sides in 2021.

Norwood has bounced back from its Round 1 loss to West Adelaide with an impressive 21-point victory over South Adelaide. The Panthers were missing key onballer Czenya Cavouras for the clash, and stuck with the Redlegs early, but a four goals to one second term blew the margin out, with both teams scoring two majors in the second half during the 7.2 (44) to 3.5 (23) result.

Booting six of the first seven goals – including two to both Elizabeth Drake and Jade Halfpenny and 1.2 to Mattea Breed – the Redlegs made the most of their chances to lead by a game-high 30 points early in the third quarter. Back-to-back goals to Jess Kirk and Gypsy Schirmer gave the Panthers some hope, but three consecutive behinds – to those goalkickers and Lauren Clifton – hurt the home side, as Kate Fenton‘s final quarter major was the only score of the quarter during the win.

Norwood had 14 more disposals, 10 more marks and 10 more inside 50s, with South narrowly winning the hitouts and clearances. Norwood’s key dominance was in the inside-50 count with 32 to 20 being the ultimate difference, though the visitors only finished with one more scoring shot – nine to eight – but were far more accurate.

South Adelaide take on Central District in the first game of a double-header at Coopers Stadium next Friday night, before Norwood host Sturt in the second game.

Sturt has stepped up in the final term to run over the top of Central District in a low-scoring tussle to secure its first win of the season. After not scoring in the first term, and then trailing by as much as 10 points at the final break, Sturt booted the only two goals of the last quarter to win by two points, 3.1 (19) to 2.5 (17).

Central District fired up early, piling on 2.2 by the first minute of the second term, with Sturt yet to score. Despite a drought-breaking goal by Amy Brooks-Birve to reduce the deficit, three consecutive behinds over the second and third term saw the Dogs get out to a double-digit lead. Needing a response in the final term, ex-Eagle Chloe Forby got on the board in the opening 90 seconds with a goal, then midway through the term, Alysha Healy kicked what would be the winning goal, handing the Double Blues a two-pint win.

Central District finished with more disposals (171-163), clearances (22-20) and inside 50s (25-19), but unsurprisingly, Sturt dominated the hitouts (41-14) and rebounds (23-16) with Zoe Prowse and the Double Blues’ defence standing up under pressure. Prowse returned to her more permanent ruck role, racking up 32 hitouts to go with 13 disposals and three inside 50s, while Hannah Prenzler (13 disposals, five marks and five rebounds), Kiera Mueller (12 disposals, four tackles and three rebounds) and Alex Ballard (10 disposals, four marks and three rebounds) standing up well in the back 50.

In Round 3, Sturt will take on Norwood at Coopers Stadium in the second game following Central District’s clash with South Adelaide in a Friday night double-header.

North Adelaide moved to 2-0 in the Roosters’ premiership defence season, defeating Glenelg in a battle of the Round 1 winners. The Roosters won by five points, 3.6 (24) to 2.7 (19), holding off a determined Bays outfit in the second half after kicking the only first half goals. The first major did not come until Tayla Gordon‘s goal in the final two minutes of the first term after six consecutive behinds between the teams. Kelly Barltrop kicked a second goal for the Roosters midway through the second term to give her side breathing space, before Jessica Bates hit back with an important one in the third quarter.

Following back-to-back behinds, Hannah Ewings kicked a vital goal early in the fourth term, and whilst Glenelg had four scoring shots in the last quarter, kicking 1.3, Lucy Armitage‘s major in the final few minutes cutting the final deficit to five points was not enough. Despite the loss, Glenelg topped the disposal count (227-212), and dominated the marks (54-36), but the Roosters pressure of 70 tackles to 44, and holding firm around the ground was crucial.

Erica Greet found plenty of the ball for the Roosters, racking up 19 touches to go with six marks – one contested – six tackles, two inside 50s and three rebounds, while Kate Case provided great run and strength in the air with 15 touches, five marks – two contested – and two tackles. The defensive pillars in Talia Radan (15 disposals, five rebounds) and Kristi Harvey (14 disposals, seven rebounds) stood up again, whilst Ewings (14 disposals, three marks, five tackles and a goal) and Jaimi Tabb (13 disposals, 12 tackles) were fierce.

North Adelaide face off against fellow undefeated side West Adelaide at Hisense Stadium in the second of a double-header clash at the venue on Saturday, following Glenelg’s meeting with Woodville-West Torrens Eagles.

A four goals to one second term has seen West Adelaide set up a strong 26-point win over Woodville-West Torrens to remain undefeated and set up a top of the table clash with reigning premiers in Round 3. The Bloods were inaccurate in the first term, then slotted 4.0 to 1.0 in the second term to storm to a 22-point half-time lead. The Eagles cut the deficit and threatened to steal the game from the inaccurate Bloods at one stage before West straightened up to win, 7.9 (51) to 4.1 (25).

Zoe Venning had an outstanding game and was best afield, also kicking the opening goal of the game 97 seconds into the match. Despite fiercely attacking for the first quarter, the Bloods kicked four consecutive behinds, and then Eagles’ Astrid Gooley made them pay with a late major cutting the deficit to just four points. Four of the next five goals all went the way of the home team, with AFL Women’s talents Chelsea Biddell and Madison Newman, and Melanie Elsegood and Ashlea James all converting goals either side of Eagles’ Amie Blanden.

At half-time the Westies lead by 22 points, but four consecutive behinds to the Bloods throughout the third term, and then goals either side of the final break to Nicole Collie and Shineah Goody, brought the deficit back to 13 points with the visitors in with a chance. That chance was snuffed out late in the game with Louella McCarthy kicking back-to-back goals in the final five minutes of the match to seal the 26-point victory.

West Adelaide hosts North Adelaide in the final game of the round on Saturday afternoon, the second game of a double-header at Hisense Stadium, while the Eagles take on Glenelg in the earlier game.