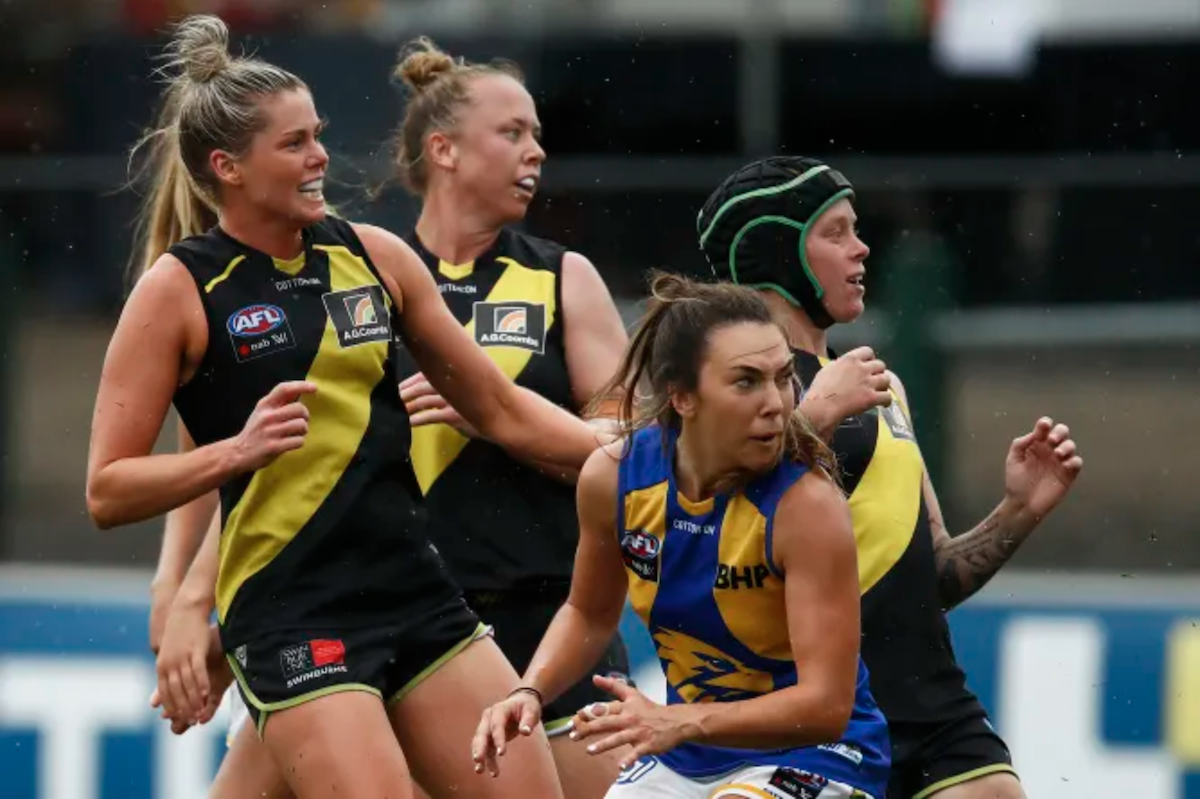 RICHMOND won its first ever match on home soil at Punt Road, holding out in a dreary and tough slog against the West Coast Eagles. With proceedings marred by continuous rain and Eagles injuries, the Tigers held on under pressure for the 5.12 (42) to 5.4 (34) victory.

It was an inaccurate win but a win nonetheless for the Tigers, with the yellow and black faithful treated to a dominant first half from the rapidly improving side. Ellie McKenzie, Mon Conti and Sarah Hosking were critical through the midfield as Tayla Stahl found her form early, booting two quick goals to pile on the pressure as the Eagles struggled to press forward. But the Tigers’ inaccuracy and missed opportunities allowed West Coast to capitalise in the third, booting three in quick succession as Grace Kelly, Imahra Cameron and Mikayla Bowen all got on the board, with Bowen executing an impressive snap from the boundary to put some hunt into the Eagles.

But whilst the Eagles committed to their second half comeback with Niamh Kelly and Maddy Collier also stepping up to the plate to drive the footy forward, a second Katie Brennan major enabled the Tigers to retain the lead, as a smattering of behinds closed out the match with an eight-point margin and plenty to take out of the tight contest.

For the losing side, Bowen was amongst the best with 21 touches and six marks to go with her two majors, whilst Bella Lewis (18 touches, five tackles), Hayley Bullas (12 touches, six tackles) and Amber Ward (22 disposals) led the charge. For the Tigers, Conti (24 touches), McKenzie (22) and Brennan (two goals, 14 touches) were instrumental, while Stahl (two goals), Christina Bernardi (nine tackles, eight touches, one goal) and Sarah D’Arcy (16 touches, three marks) also proved influential in the side’s third win of the season.

The Tigers will take the field in their final match of the season under Friday night lights against the Western Bulldogs at VU Whitten Oval, whilst the Eagles will finish off their home-and-away season in the final match of the round, hosting St Kilda at Mineral Resources Park on Sunday night.

IT was a blowout over in the South with the Adelaide Crows trouncing the Western Bulldogs 12.6 (78) to 3.4 (22). The one-sided affair really came to the fore in the final term with the Crows piling on four goals to produce a 56-point win. The Bulldogs struggled to generate scoring power throughout the contest booting just three goals for the match and going goalless in the third term, while the Crows had no troubles finding the big sticks.

It did not take long for the Crows to land the first blow with Chloe Sheer making her presence immediately felt on the scoreboard with a major. Her energy trickled through to her teammates as Adelaide moved the ball with tenacity and ease before Erin Phillips slotted her first major of the game moments later. Trying to keep her side afloat Bonnie Toogood stepped up to the plate for the Doggies kicking a major of her own but her efforts were quickly overshadowed by Caitlin Gould.

Playing with confidence the Crows amped up the pressure in the second term forcing turnovers from the Western Bulldogs and capitalising with Gould and Sheer registering their second majors for the game. Applying scoreboard pressure and stifling the Dogs’ ball movement, the home side extended their lead out to as much as 33 points at half time.

Scoring dried up for both sides in the third quarter with only one goal added to the tally coming off the boot of Ash Woodland. Western Bulldogs could not find the big sticks in the third quarter, unable to slot a single goal as the game turned into an arm wrestle of sorts. Despite holding a commanding lead heading into the final change, Adelaide still had plenty to pprove replicating that hot form from earlier in the game and getting down to business in the fourth. Piling on four goals to one in the last stanza the Crows flexed their muscles, spearheaded by Sheer who seemed to have her kicking boots on while Danielle Ponter sent tongues wagging with a stellar mark.

It was a good day at the office for Sheer who managed three goals from her 13 touches while Gould was also electric nailing two majors and picking up 10 touches. Woodland was the other player to score multiple goals with two as five other players managed to add a sole goal to the Crows winning margin. Ebony Marinoff could not be denied with the star midfielder involved in just about everything to top the table with 25 disposals and six marks. Partner in crime, Anne Hatchard was at her usual dominant best recording 19 touches, five marks and six tackles while 21-year-old Eloise Jones left her mark thanks to her 14 touches, four marks and goal. Stevie-Lee Thompson and Phillips managed 14 disposals apiece as Teah Charlton also threw her weight around to walk away with 12 touches and an impressive seven tackles.

Unfortunately it was a tough day at the office for the Dogs but the efforts of Toogood and Brooke Lochland did not go unnoticed. Toogood was the main port of call inside 50 nailing two goals while Lochland racked up the possessions with a team-high 20. Ellie Blackburn was a strong force for the Dogs amassing 19 touches as Eleanor Brown finished with 15 touches and six tackles. Kirsty Lamb chimed in across the ground, not afraid to put her body on the line and tackle hard in what was a solid outing by the 26-year-old who managed 14 touches, a goal and five tackles.

MELBOURNE has cemented its finals chances with a clutch win over a fast-finishing Fremantle outfit, leading for majority of the contest and holding on in a hugely pressurised final few minutes to run out victors 5.7 (37) to 4.8 (32).

It was an explosive start from the Dees that allowed them to hang on under pressure, with a four goal half time lead whittled down to just five points at the final siren. Two first half goals to Kate Hore set the tone as the Demons commanded ball from the get-go on enemy soil, as Karen Paxman led the way around the ground, with the support across the ground allowing the side to maintain control during the hard fought and physical battle. Tempers fired during the third as Roxy Roux intercepted and kicked truly inside 50, as the likes of Kiara Bowers and Hayley Miller worked their way into the match, setting up a huge final term as the margin closed between the two sides. While Bowers was well held early by a rotation of taggers, proceedings seemed to be getting going on the Dockers’ terms during the final quarter with the Dees soon down a rotation as Sinead Goldrick went down with what appeared to be a hamstring injury, as Roux booted a second and Gemma Houghton put Fremantle in front for the first time with less than 10 minutes on the clock. But Lauren Pearce‘s consistency and ability to take control through the centre continued to pay off, with the Dees benefiting off her vision and taps with Eliza McNamara and Maddi Gay rarely far from the action, with the latter booting the final goal of the game to seal victory and a spot in the top six a week shy of finals.

To the Demons’ credit, it was not just their first half forward pressure that won them the match, but also the side’s ability to maintain pressure during the Dockers’ excellent comeback, controlling proceedings and creating stoppage after stoppage to whittle down the clock and force Fremantle to take risks downfield. Paxman (24 disposals, six marks), McNamara (21 disposals, four tackles, one goal) and Pearce (20 touches, 16 hitouts) were amongst the best for the Dees, while Gay and Hore stepped up during crucial moments and Eden Zanker had some excellent passages under pressure. For the Dockers, Bowers was kept to just 12 touches but still laid 11 tackles, while Miller (13 touches, seven tackles), Tiah Haynes (16 and six) and Roux (two goals, eight touches, five tackles) also showcased some great form.

Both sides head to Victoria for the final round, and while neither require a Round 9 win given they have secured finals positions, both the Dees and Dockers will look to capitalise on their form ahead of the post-season when they come up against fellow finals-bound sides in North Melbourne and Brisbane on Saturday afternoon.