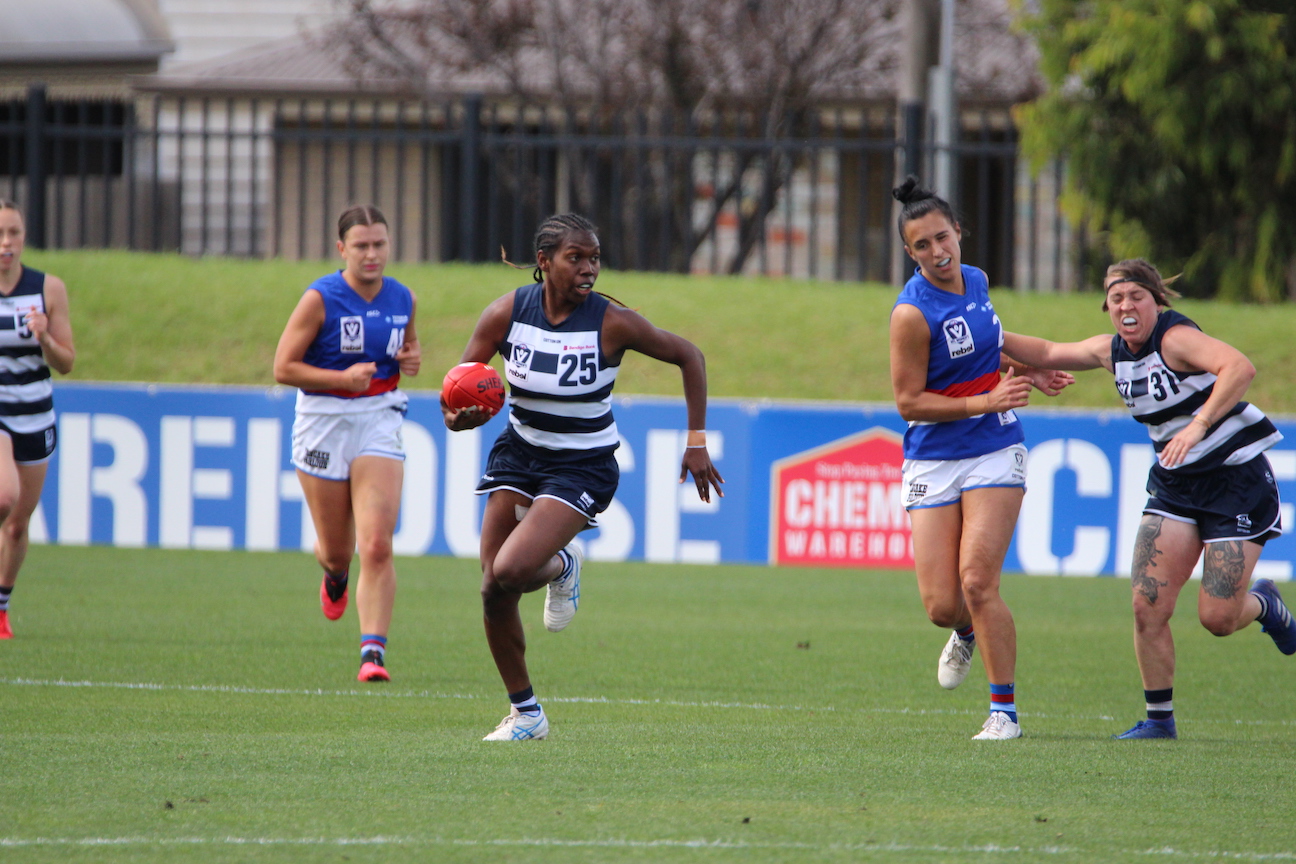 IN Round 5 of the Victorian Football League (VFL) Women’s competition, Carlton, Southern Saints and North Melbourne both grabbed their second wins, Collingwood and Port Melbourne extended their lead at the top of the table, as Geelong kept its opposition goalless in an impressive win on the road.

Collingwood maintained its perfect start to the VFL Women’s season with a 28-point victory over fellow strong starters Casey Demons at Victoria Park on Saturday. The Magpies got on the board in the opening term with a couple of goals and manage to restrict their opponents to just the one major by half-time. A further four goals to one in the second half meant the home team left happy, kicking 8.4 to 3.6 from only three more scoring shots for a comfortable victory.

Kristy Stratton slotted three majors in the win and was clearly a standout in the forward half of the ground. Tenacious mid/forward Matilda Zander, as well as Jasmine Ferguson, Tricia Cowan and Sarah King were also impressive in the victory. For the Demons, Imogen Milford did all she could with three goals of her own up forward, the only goalkicker in the red and blue. Young gun ruck Maggie Caris impressed, while ex-Pie Nicole Hales, and Samantha Johnson were also among the Demons’ best in the loss.

Southern Saints snapped a three-game losing streak in the best possible fashion, dominating the winless Darebin Falcons by 10 goals. The Saints only conceded one goal and two scoring shots for the entire match, including holding the Falcons scoreless in the second half. Up their own end, the home team shook off some inaccuracy concerns, booting 9.13 (67) to take home the points comfortably – including a six-goal second half – by an even 60 points.

Tara Bohanna and Tenaya Sooalo both slotted two majors each for the winners, while Tayla Kearns was named best on ground in the victory. Tamara Luke, Deanna Jolliffe and Madi Capsalis were also among the best, as was ex-Eastern Ranges talent, Gabbi De Angelis. Sabine Cowley Du Parquet was the sole goalkicker for the Falcons and was among the best players alongside Gena Lawson-Tavan, Alyssa Mifsud and Victoria Blackwood.

Carlton had its most impressive performance of the year, shutting the lights out against Hawthorn in the first three quarters to win its second match of the year by five goals. The Blues piled on five goals in the third term to stretch its lead out to as much as 54 points at the main break. While the Hawks were admirable in the last quarter, slotting four goals to just one behind to cut the deficit back to 30, the damage was done prior to that, and the Blues got up, 9.11 (65) to 5.5 (35).

AFL Women’s listed Blues Courtney Jones (four goals) and Serena Gibbs (two) both looked impressive up forward and were amongst the standouts, while Ally Bild, Olivia Madden, Teresa Zampaglione and Bryannen Gull were also named in Carlton’s best. For the Hawks, Katie Angelis kicked two majors and tried to inspire the brown and gold, while Jessie Williams and Tayah Kelly also hit the scoreboard and were amongst the best. Nicole Cormack and Catherine Brown were others who drew praise from the coaches despite the loss.

Geelong reaffirmed its status as a strong defensive side, keeping its opponent Western Bulldogs to just six points in fairly good conditions at Whitten Oval. The Bulldogs’ woes in front of goal continued for yet another week, having plenty of chances early and not capitalising, and then losing the momentum. Geelong booted a goal in each quarter and two in the third quarter to maintain a distance between them and their opponents, and then things went from bad to worse for the home team as no less than three Dogs were helped off in the last 30 minutes of the match, leaving rotations restricted and some a little sore during the 5.10 (40) to 0.6 (6) defeat.

Stephanie Williams was a livewire up forward for the Cats, slotting two goals and threatening to kick quite a few more, while Paige Sheppard had a day out through the midfield. Olivia Fuller, Teresia Meissner and Tahlia Tatlock were also among the best in the blue hoops, while Claudia Gunjaca kicked a goal and was also in the bests. Bailey Hunt, Katelyn Betts and Isabella Grant never stopped trying for the Dogs, with Annabel Strahan and Eliza Vale also trying to provide run and carry for the home team, and captain Riley Christgoergl putting her body on the line in the contest.

Port Melbourne’s unbeaten start to the season rolled on in Round 5 with a well-fought 11-point victory over Essendon at The Hangar. The Bombers came into the clash with a 3-1 record themselves, but from the start it was clear the Borough were up for a fight. The visitors booted five goals to two in the opening half to open up a handy 18-point advantage, and whilst Essendon restricted the opposition to 1.1 in the second half, could only convert the 2.2 themselves, and ultimately cut down the final score which was in favour of Port Melbourne, to 6.2 (38) to 4.3 (27).

Richmond-listed key forwards, Cleo Saxon-Jones and Emily Harley both slotted two goals apiece, while Kate Adams returned from another match at NAB League Girls level to kick a major herself. Pip Peschke, Sarah McNamara and Courteney Bromage were all amongst the best, as was Claire Dyett (one goal) and the multiple goalkickers. Another ex-Murray Bushrangers talent in Eloise Ashley-Cooper was named best on ground for Essendon in the loss, as Courtney Ugle, Alana Barba and Alexandra Morcom were also impressive, while Federica Flew snagged two goals in defeat.

In a battle of two sides outside the eight, North Melbourne picked up its second win with a four-point victory over Williamstown, joining the Seagulls on two wins from five games. The Kangaroos only managed one goal in the first half and trailed by 10 points at the main break, but the second half worries for the Seagulls returned with the Kangaroos running over the top of them at Arden Street, booting 3.3 to 1.1 in the second half to win, 4.6 (30) to 4.2 (26).

Meagan Kiely and Jess Mourney impressed and were among four individual goalkickers for the Roos, with Sarah Skinner and Laura Wright also adding their names to the goalkickers list. Alexia Hamilton was named best-on for her performance, while Reni Hicks and Molly Eastman stood strong as well. Aimee Whelan kicked a goal and was named best-on for the Towners, while Olivia Purcell, Lana King and Scarlett Dunnell were among the best in the unfortunate tight loss.