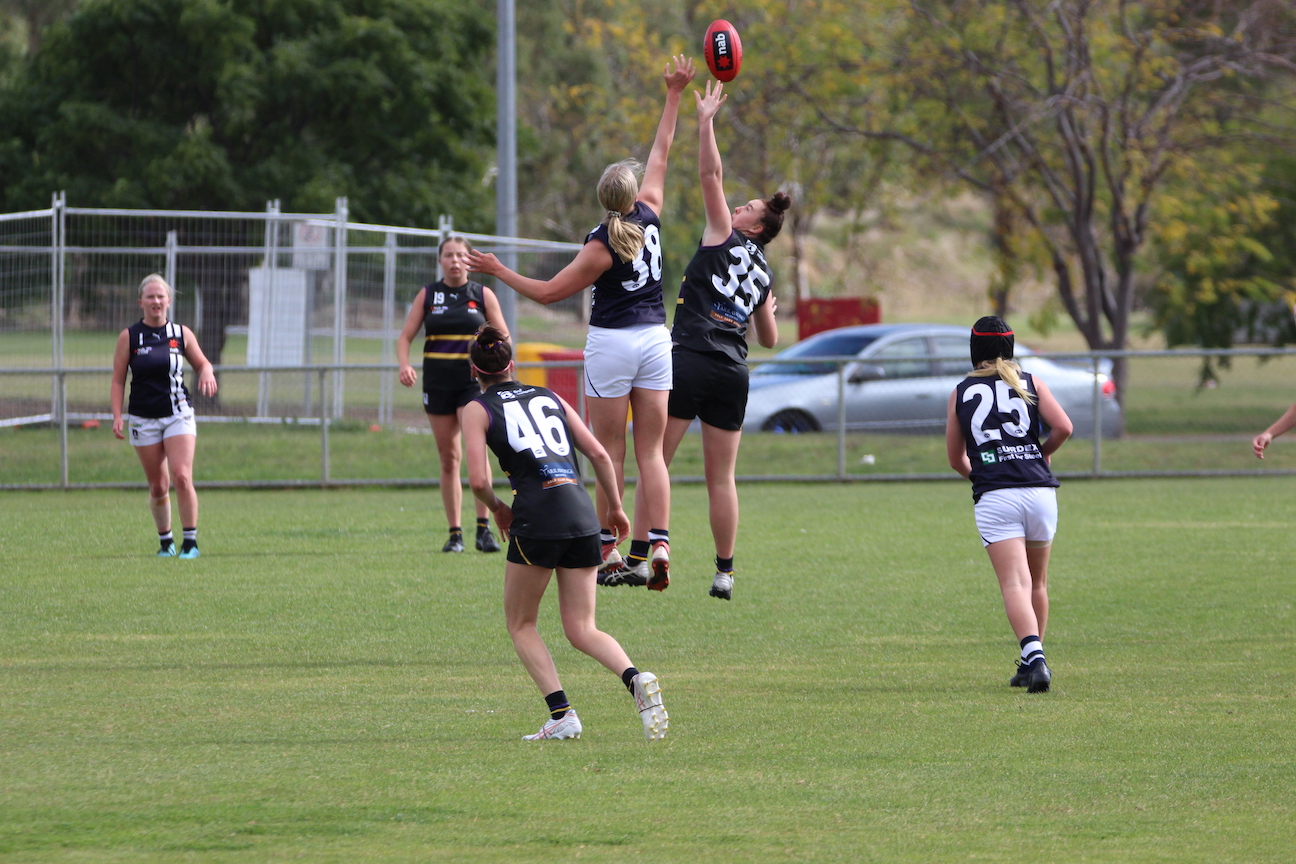 MURRAY Bushrangers have won their second game of the 2021 NAB League Girls season with a spirited come-from-behind victory over Geelong Falcons at a wet and windy Epsom Huntly Reserve.

The weather conditions were averse to a fast, free-flowing game with players feeling the strain of kicking into it early. It was the Falcons who took the momentum in the opening term, kicking the only four scores of the quarter, but could only net four behinds. Murray managed to get on the scoreboard in the second term, but could only cut the deficit to three points at the main break to trail 0.5 to 0.2. Murray found the big sticks midway through the third term with back-to-back goals, to race out to a nine-point lead. Geelong then countered with two of their own to lead by four points at the final break and win the first three quarters. It meant little in the end though as Murray, with the aid of the breeze in the final term kicked the last three goals of the match and won by 15 points, 5.3 (33) to 2.6 (18).

Zara Hamilton was outstanding for the winners, feeling the pinch of being tackled on multiple occasions early, but kept spreading and providing an option, whilst Olivia Cicolini looked dangerous in attack with Lily Sharp, and Mindy Quade and Kaylea Kobzan steadfast in defence. The Falcons were led well by talls, Analea McKee and Keeley Hardingham, whilst Charlotte Hardy and Taylah Hassett were impressive in midfield, and Chloe Adams lively in attack during the second half. The teams will have a break before the final Round 9 takes place at the end of the month.

The midfielder has had some promising moments throughout the season and really stepped up in the absence of key personnel. She was really prominent early, winning the footy and driving it forward, then also winning a ground level ball to intercept and kick forward. She kept having a crack and was the beneficiary of some free kicks for her efforts. Always lively, Hardy just kept working all game.

Was particularly prominent in the second half, kicking the Falcons’ first against the flow of play with a clever kick off the outside of the boot to an open goalsquare and bounce home. Adams also had another shot 40 metres out straight in front but her shot held up and fell short, then showed good dash in the final term bursting through the middle of the ground and kicking forward.

One of the more prominent rucks this season, Hardingham took advantage through the middle and worked well around the ground with her ruck taps. She was busy with clean hands and a target throughout, often thumping the ball forward or just trying to gain meterage in tough conditions. She had a flying shot on goal in the third term which was marked in the goalsquare, then kicked a quick goal out of nothing late in the term which bounced home to put her side in front at the final break.

Best on for the Falcons throughout the four quarters, she seemed to have the velcro hands out there with the wet conditions not phasing her. Whilst her wet weather footy approach was good, it was her ground level tackling pressure that stood out, laying some big ones on opponents to lock it up. She worked hard up and down the ground and won touches in all thirds of the ground. She was influential throughout the match and had a running shot on goal in the third term but missed to the left.

The dangerous forward worked up the ground to win a one-on-one contest, and whilst a couple of the early kicks got caught in the breeze, she kept working hard. Had a really strong second half, with a quick kick inside 50 to start the term, before taking a strong mark at half-back and driving it forward. She capped off the performance with a goal inside 50 and kept pushing hard to the final siren.

Had some crucial moments in the match, and could have had up to three majors for the day, with an early chance in the second term running into an open goal but hitting the post. Sharp continued to work hard and eventually capitalised with a strong mark by staying in front off a wobbly kick inside 50, nailing the set shot against the breeze. She set up another goal that with a kind bounce which could have gone through for her own, by Sophia McCarthy did not make a mistake on the goal line.

Was a reliable force in defence once again, taking some strong intercept marks and driving it out of defence with vigour. She even pulled out a torpedo from half-back to half-forward in the final term, and was vocal in her leadership from the back 50 to steady the ship and help teammates up the field.

The best on ground throughout the match, Hamilton had a starring role through the midfield, finding space and winning plenty of it. She was battered and bruised early through a number of crunching tackles, but kept pushing and worked hard around the ground. She was able to put the ball forward on a number of occasions, and then set up a goal to Lily Sharp courtesy of a floating kick that worked out, but it was her hands around the ground to keep the ball moving, and hard running effort that really stood out in the victory.

Mackenzie McGrath was really impressive for the Falcons, particularly in the first half with her pinch-hitting in the ruck and work around the ground, while Sara Howley, Mekah Morrissy and Taiya Morrow also had some prominent moments. For the Bushrangers, India Lehman worked hard, Kristy Whitehead was steadfast in defence, and Sophia McCarthy and Matilda Lyons kicked crucial goals in the match.