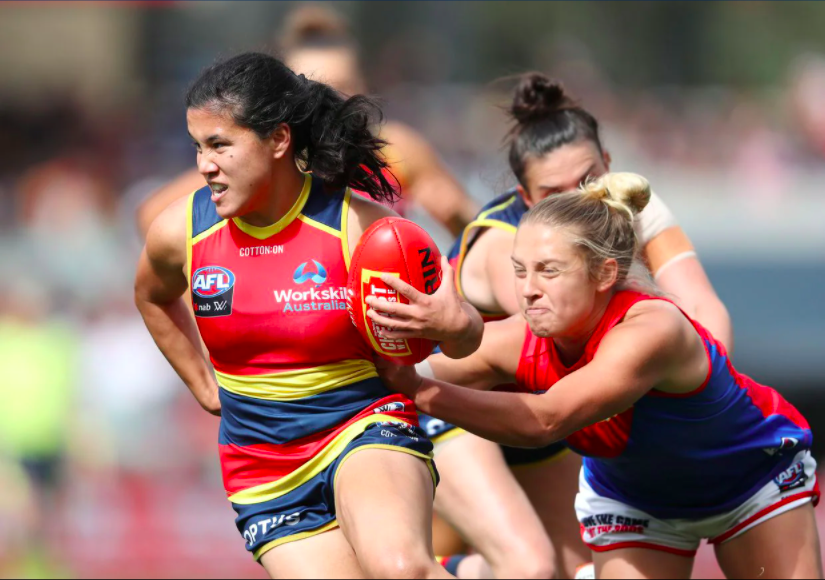 THE 2021 AFL Women’s season rolled on into its second week of finals, with two enthralling knockout bouts played on Saturday. A number of fresh faces continue to make their mark on the competition having already established roles in each remaining team, producing big moments on the biggest of stages. We run you through how Generation W’s generation next fared across the latest weekend, focusing on players who were selected from the most recent draft crop.

Two-time AFLW premier, Adelaide became the first side to book its spot in this year’s decider, beating Melbourne by 18 points at Adelaide Oval on Saturday. The Crows were led by their usual band of ball winners, but also had a bunch of handy contributions across the board. 22-year-old Rachelle Martin was one who provided great spark for the winners, applying punishing pressure and digging in hard at ground level. The diminutive speedster finished with 13 disposals, three tackles, and four inside 50s in an important outing.

First year forward Teah Charlton was also productive with 10 touches, two marks and three tackles for the winners, while fellow attacker Ashleigh Woodland brought great intensity with six tackles. The latter two have played every game this season and will likely suit up next week, with Martin another in that boat having impressed across a five-game run in the side.

Melbourne was dealt a crushing blow early as tough midfielder Eliza McNamara was ruled out with concussion following a heavy collision with Adelaide skipper, Chelsea Randall. She played every game in her debut season and has been an excellent addition to the Dees’ squad. 24-year-old Irish recruit Lauren Magee notched three touches in her sixth-straight outing, as prized draftee Alyssa Bannan finished her maiden senior campaign with two disposals in red and blue.

Brisbane earned passage to its third grand final in five AFLW seasons on Saturday, via a thrilling four-point win over Collingwood at the Gabba. The Lions now have the chance to claim their first AFLW premiership, with plenty of members from the 2017 and 2018 squads remaining in the maroon, blue, and gold. Rookie sensation Courtney Hodder has played every game this season and while she only registered one disposal on Saturday, played her role with four tackles. South Australian native Indy Tahau has cemented her spot since a Round 4 debut, and will also look to cap off her year in a big way after managing three touches and two tackles.

While they did not achieve the desired result, the Magpies were served well by their two first-year players afield. Father-daughter selection Tarni Brown proved she is every bit the finals player with another outstanding goal in black and white. During the second term, she gathered in the centre square before tucking the ball under her arm, taking on an opponent and slotting the goal from about 40-metres out. She finished with 11 disposals and three inside 50s to cap off a terrific debut season. Bella Smith was also solid with three marks among her eight touches. The tall recruit played the first and last three games for Collingwood in 2021.