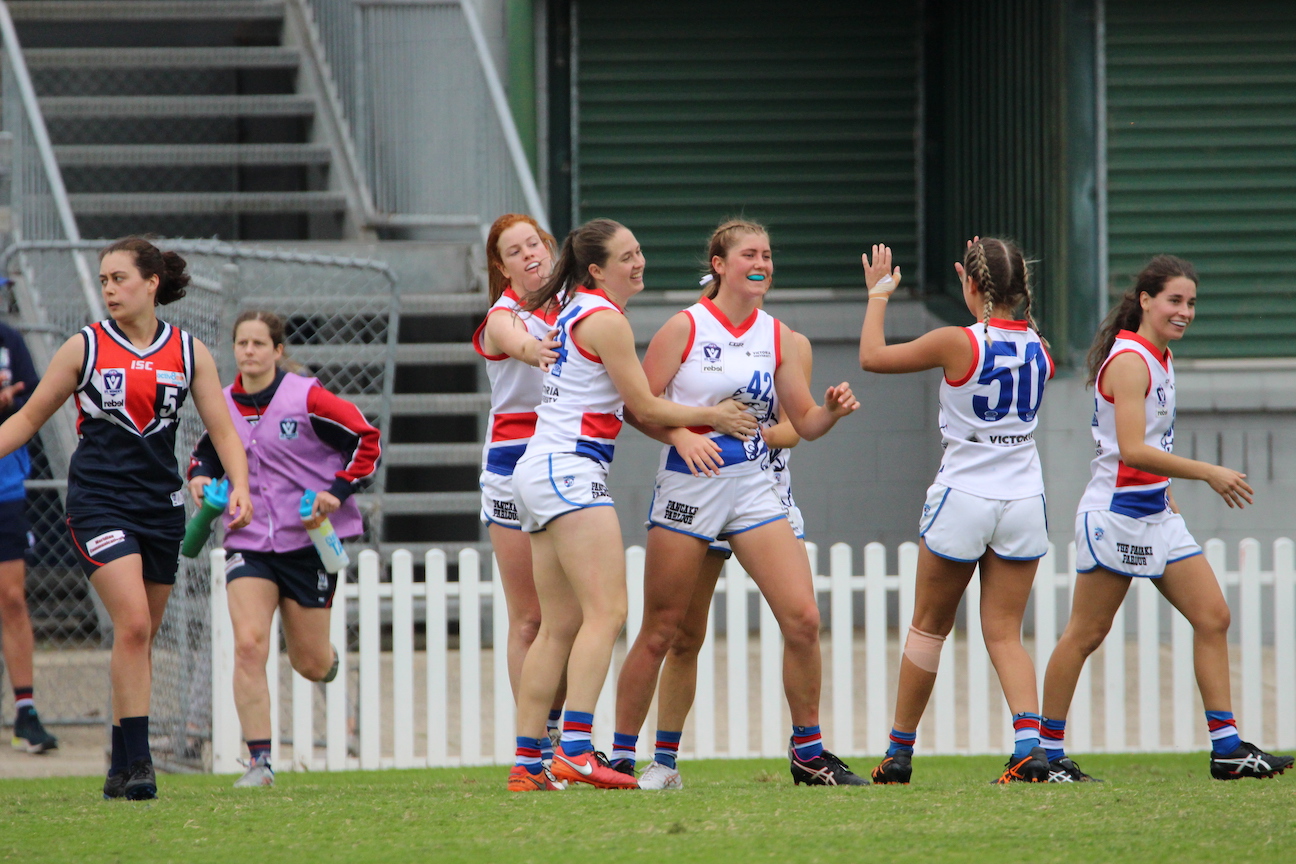 WESTERN Bulldogs are back on the winners list in the Victorian Football League (VFL) Women’s competition after snapping their five-game losing streak against Darebin Falcons on the weekend. The Dogs scored the highest score of any side this year with 14.9 (93), having only scored a total of 136 points in the opening five rounds. Collingwood and Port Melbourne remained undefeated after the latter executed a remarkable come-from-behind win over Carlton, while Essendon, Casey Demons and Geelong all kept touch with the top two after important victories over lower-ranked opposition.

Collingwood has overcome a slow start to put the Southern Saints away at Trevor Barker Oval and remain undefeated from seven games. The Saints fired early to kick the first two goals of the game, but the Magpies took control with two goals in less than seven minutes in the second term to hit the front and never surrender the lead. The Saints kept pushing and did get within a point – and even within three points in the dying minutes of the match – but a couple of late majors to Bella Smith sealed the 15-point win for the Magpies, 6.5 (41) to 4.2 (26).

Smith’s three goals from 12 disposals and five marks was a highlight, with fellow ex-Norwood talent Matilda Zander again being productive with 16 disposals and nine tackles. Maddie Shevlin was the clear standout in terms of ball-winners for the black and white, as she amassed 25 disposals and four tackles. Jasmine Ferguson (18 disposals, five marks and seven tackles) and Caitlin Bunker (16 disposals, two marks seven tackles) won their fair share of the ball, while Abbey Green booted two majors and Olivia Meagher impressed at the level once again. For the Saints, Alice Burke went haywire with 35 disposals, seven marks and two tackles in a massive effort, whilst Madison Capsalis (25 disposals, six marks and nine tackles) and Molly McDonald (19 disposals, five marks) were not far behind. Poppy Kelly (15 disposals, 30 hitouts) had a day out in the ruck, as Tara Bohanna continued her good form in front of goal with 10 disposals, five marks, four tackles, six hitouts and two majors.

Essendon has notched up another win, this time by five goals over Williamstown despite some inaccurate kicking early on. The Bombers had 10 scoring shots to three in the opening three quarters, but only led 3.7 to 1.2, before kicking 3.2 to 1.1 in the final term to run away with the contest by 30 points.The Seagulls battled hard throughout, matching the Bombers in most areas, but could not quite have enough scoring chances to overrun them.

Calder Cannons youngster Zali Friswell kicked the first major of the game to finish with two goals from six touches and nine tackles for the home team, as Federica Frew was best-on thanks to 16 disposals, three tackles and 2.2. Eloise Ashley-Cooper (17 disposals, six tackles) and Natalie Macdonald (17 disposals, five marks) were both busy, while Cecila McIntosh, Mia-Rae Clifford, Eloise Gardner and another Cannons youngster in Kasey Lennox were also named among the best. For the Seagulls, Ruby Tripodi had 20 disposals, five marks and two tackles, as Erin Meade (19 disposals, three marks and four tackles) and Aimee Whelan (18 disposals, 11 tackles) were also productive. Eliza Straford and Ella Baxter were also named in the Seagulls’ best after double-figure disposals and impact in the game.

A six-goal haul from Imogen Milford has guided the Casey Demons to a tight 13-point victory over Hawthorn to stay in touch with the top four sides. The teams were evenly matched early in the game with Milford booting two in the first term, her third early in the second, then in the space of three minutes between the final moments of the second term and third minute of the fourth term, added another two goals, with her sixth midway through the third term blowing the lead out to a massive 32 points. The Hawks stormed home with 3.2 to 0.1 from that point onwards, but it would not be enough, going down 9.6 (60) to 7.5 (47).

Milford finished the day with 16 disposals, four marks, nine tackles and 6.1 for her troubles, as Eliza West continued her dominant ball-winning spree in 2021 with 28 disposals, three marks, six tackles and one goal. Maggie Caris impressed through the ruck with 22 hitouts to accompany her 11 disposals, while Shree Fairchild and Meg Macdonald were also named among the Demons’ best in the win. New (and former) Hawk Kristy Stratton made an impact in her first game back for the brown and gold since been delisted by Collingwood, picking up 16 disposals, laying five tackles and kicking a goal. Catherine Brown racked up 17 disposals and four tackles, with Dominique Carbone and Olivia Flanagan also busy, and Emily Gilder named best for the brown and gold.

Geelong did enough to post a solid 16-point win over North Melbourne at Queen’s Park, winning the first half to build up a 23-point lead at the main break. The Cats were challenged in the second half, but managed to stop the Roos from piling on too many majors, and while the visitors did cut into the deficit, the home team got up, 7.6 (48) to 5.2 (32).

Olivia Barber booted three goals from 16 touches, five marks and nine hitouts in a promising performance, as Laura Gardiner found the ball at will thanks to 27 disposals and 11 tackles. Paige Sheppard (22 disposals, four marks and seven tackles) and Sophie Van De Heuvel (22 disposals, four tackles) also found plenty of the ball. Claudia Gunjaca booted a couple of majors off 12 touches, three marks and five tackles, while Darcy Moloney was another Cats AFLW-listed player who hit the scoreboard off 14 touches and four tackles. Meagan Kiely was the top ball winner for the Roos with 23 disposals, seven marks and eight tackles, ahead of Sarah Skinner (22 disposals, five marks and five tackles). Fellow Tasmanian Brooke Brown kicked the three goals from 17 disposals up forward, while Alexia Hamilton was also impressive through the ruck with 14 disposals, 14 hitouts and eight tackle.

The return of a number of AFL Women’s listed players helped the Western Bulldogs boot the highest score of the season and snap a five-game losing streak in the process. Slotting six goals to one in the opening term, the visiting side all but won it in the opening 20 minutes. The Falcons were strong over the next couple of quarters, refusing to give in and keeping touch with the Dogs, before a five goals to one final term blew the margin out to 69 points as the Bulldogs won 14.9 (93) to 4.0 (24).

Angelica Gogos returned for her first game this season and had an impact with 23 disposals, six tackles and a goal, teaming up well with the classy Gemma Lagioia (22 disposals, three marks and 2.2). Eleanor Brown also came into the side and kicked a couple of late goals after being an interceptor in the back half, finishing with 16 disposals, seven marks and two majors. Western Jets youngster Jemima Woods made a sterling debut with three goals, the same as Danielle Marshall, while Mary Sandral slotted the two goals. The Dogs also did well defensively with Gogos one of three players – with teenagers Brooke Hards (nine tackles) and Lilli Condon (five) – who recorded their fair share of tackles. Ex-Bulldog Nicole Callinan racked up a match-high 29 disposals, 10 marks and five tackles, with Samara David capitalising on her chances up forward with three goals, and Ashleigh Gunn lively with 18 disposals, five marks and three tackles. Lauren Camilleri was the benchmark for tackles with 10, while Cannons’ youngster Peppa Poultney stood up with 10 touches and two marks playing mostly forward and pinch-hitting in the ruck.

Port Melbourne faced its stiffest task to-date in the VFL Women’s 2021 season, having to overcome a 13-point deficit to Carlton late in the third term – after trailing by three goals at quarter time – to eventually come from behind and win by a goal. The Borough kicked the winning goal six minutes into the final term when Claire Dyett converted a major and then the home team held on in a titanic struggle to take home their seventh win of the season, 7.4 (46) to 6.4 (40).

Phillipa Peschke had the most touches for the winners with 22 disposals, three marks and 10 tackles, teaming up well through the midfield with Mel Kuys (20 disposals, three marks and three tackles. Ex-Blue Bridie Kennedy shone against her former side with 10 disposals and five tackles, while Dyett, Elizabeth Wilson and Courteney Bromage were all named among the best. Sabrina Frederick kicked another two goals from 13 touches and three marks, while Oakleigh Chargers’ teenager Taylah Morton had the 10 touches and three tackles in the win. Maddy Guerin won plenty of the ball for Carlton in defeat, picking up 21 disposals, seven marks and nine tackles, while Paige Trudgeon (12 disposals, seven tackles) and Charli Linssen (16 disposals, four tackles) also stood out. Amelia Klingbeil laid a whopping 12 tackles, while Olivia Madden (17 disposals) and Winnie Laing (14) also found their fair share of the ball.