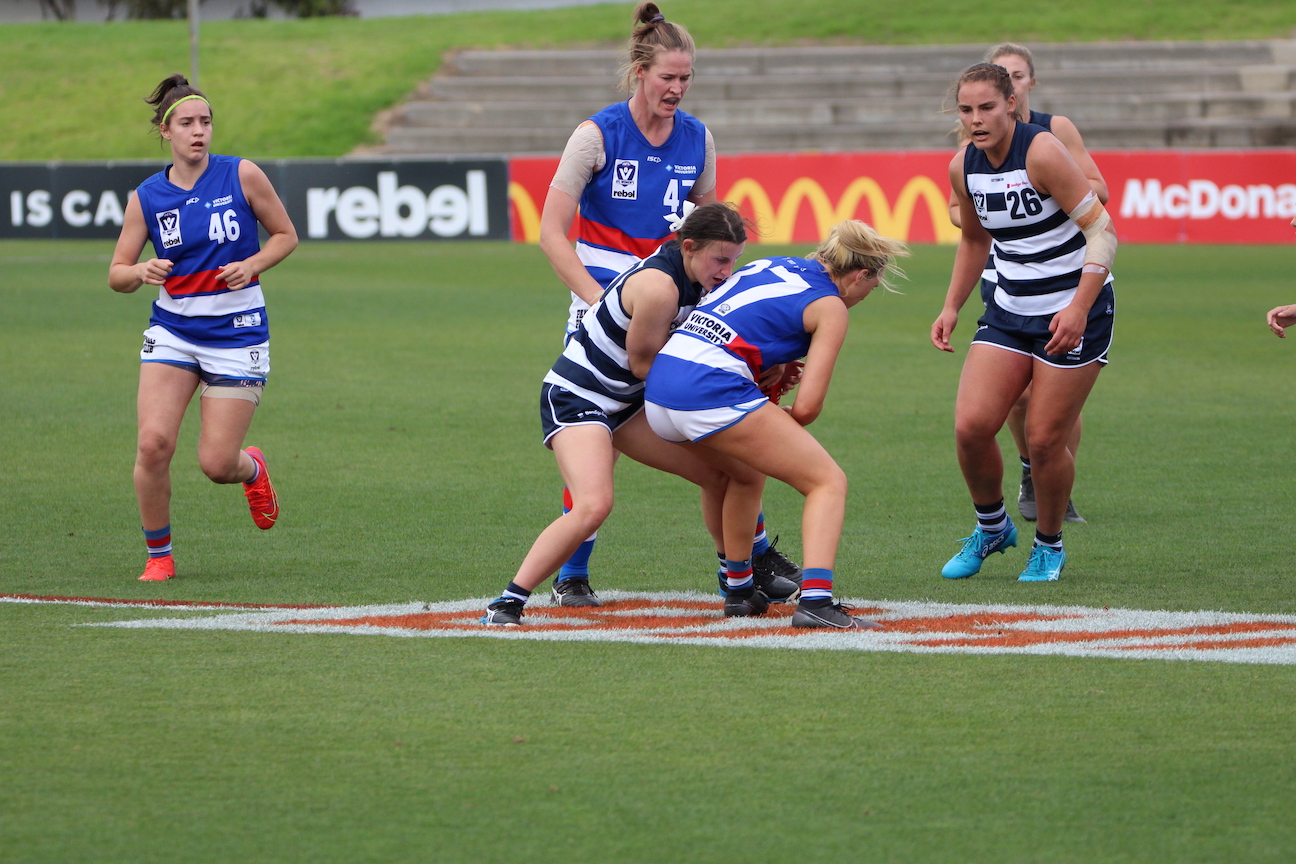 IMOGEN Milford‘s six-goal haul during Casey Demons’ win over Hawthorn on the weekend has seen the forward grab top spot on the VFL Women’s goalkicking leaderboard. The 21-year-old tall has slotted 12 goals in her seven games, but really helped chalk up her numbers in 2021 with the half dozen majors in Round 7.

Milford now holds a three-goal lead over Port Melbourne’s Sophie Locke who has missed the past couple of games through injury, and then seven players are on eight goals apiece. Among them are the likes of AFL Women’s listed pair Brooke Brown (North Melbourne) and Bella Smith (Collingwood) who have achieved that feat in just four games each.

In terms of ball-winners, Casey Demons Eliza West has taken over in the absence of the injured Georgia Nanscawen, as West averages 22.3 disposals per game. She has picked up 12 more disposals than her nearest rival, Geelong’s Paige Sheppard, with North Melbourne trio, Meagan Kiely, Molly Eastman and Sarah Skinner surrounding Nanscawen to round out the top six disposal winners.

In terms of tackles, Tamara Smith is the only player to reach 80 so far this season, with the Geelong midfielder laying 81 tackles at an average of 11.6 per game. Port’s Courteney Bromage is not far behind with 74, ahead of Williamstown’s Ashlea Melnikas, and Nanscawen – who has a game and a half less than her rivals – in fourth. Sheppard also features inside the top 10, averaging 7.6 tackles per game.

In terms of rucks, Collingwood’s Sarah King has put down 141 hitouts, overtaking Casey’s Maggie Caris (135) who missed a match two games ago. Darebin Falcons’ Sidney Cubasch and Western Bulldogs’ Nicole McMahon have arguably been the two top performing rucks this season, and they faced off on the weekend, with the end result seeing them both finishing the round on 128 hitouts at 21.3 per game.

Darebin’s Samara David holds the lead in terms of marks, taking 32 this season at 4.6 per game, one more than Kiel. Southern Saints’ forward/ruck Tara Bohanna has the 29 marks in season 2021, ahead of Geelong’s Claudia Gunjaca, North Melbourne’s Airlie Runnalls and Western Bulldogs’ Simone Ruedin.

In terms of Draft Central (DC) points – the basic AFL Dream Team calculations without free kicks factored in – Bohanna and Kiely are the top players to have played every game, with 72 DC points thus far for the 2021 season. Skinner (66), West (64), Sheppard (64) and Eastman (64) are the others with more than 55 points and have played every game, whilst Nanscawen is up at 68 per game from her five-and-a-half matches. Brenna Tarrant‘s five-goal haul in Round 1 has netted her the highest pure DC point total with 92 from that game, whilst Jess Matin (87) and the returned Nicole Callinan (81) rounding out the top three.

GOLD Coast Suns Academy has announced its Under 18s Female squad for the 2023 season, with the announcement of a 37-player list to compete in both the Coates Talent League and other Northern Academy matches. The squad ranges in age from 2005-born talents to 2007-born players, giving fans a chance to catch some of the […]

THE South Australian National Football League (SANFL) Women’s league has an abundance of young talent that goes far beyond just 23 players. In an additional piece to the countdown of 23 Under 23 Player to Watch, we name others who were in contention to make the list, and would not be undeserving to have made […]